- Commerzbank says "outlook is negative," look for test of 1.1958 support.

The Pound-to-Dollar rate crashed toward a key support level at 1.1958 Tuesday, a failure of which would risk further steep losses, amid more widespread weakness in the British currency and strong demand for the greenback.

Pound Sterling was back in the dog box Tuesday, falling against most of its major rivals including the 'high beta' Australian and New Zealand Dollars, although losses were largest relative to the big Dollar which rose against all of its major rivals. Price action came amid a steep fall in the three-month EUR/USD forward points, which fell by around half at the North American open before recovering almost as quickly.

Movements in the spread between EUR/USD forward points and the EU-U.S. overnight-index-swap spread have caused extreme volatility in broader financial markets of late and are said to be the result of financial-crisis-style stresses in some money markets. Many recent Federal Reserve measures have been aimed at providing 'liquidity' that should ease those stresses although take-up of the bank's offerings has been low.

"GBP/USD’s outlook is negative, the sell off has already reached the 78.6% retracement at 1.2290 – this is regarded as the last defence for the 1.1958 September low. Rallies are likely to now find the 200 day ma at 1.2702 acts as near term resistance and we look for the market to ideally fail on rallies into the 1.2480/1.2620 band," says Karen Jones, head of technical analysis for currencies, commodities and bonds at Commerzbank.

The Pound-to-Dollar rate already crashed through two key levels on the charts late last week, setting it up for the losses that were crystalising on Tuesday, although there could still be more downside ahead. The nearby 1.1958 level marks the 100% retracement of the September 2019 uptrend and could offer Sterling some intraday support, although that threshold fails, the downside for the Pound from there could be substantial. 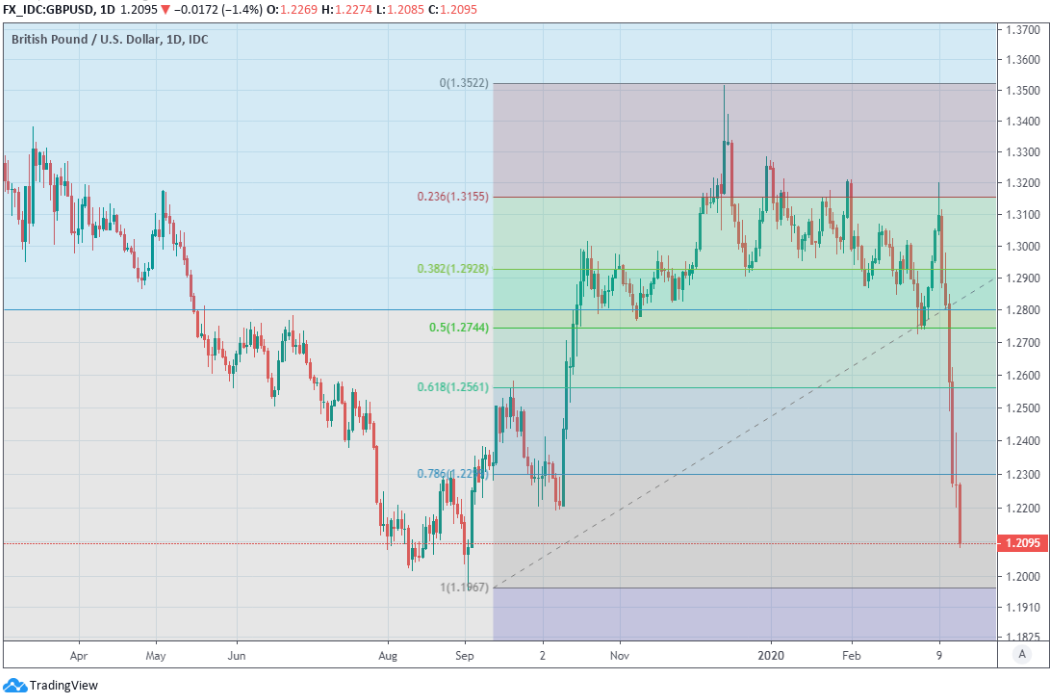 "The UK is a current account-deficit country with a higher exposure to financial risks, which is a key reason why we have maintained a short GBP/USD and long EUR/GBP position," says Jordan Rochester, a strategist at Nomura.

The current account deficit cited by Rochester is often described as Sterling's achilles heel and means the currency relies for part of its value on continuous inflows of foreign capital. Those now risk being interrupted amid the unprecedented threat to the economy and operations in the City of London stemming from the coronavirus. London is home to assets worth more than three times GDP and is fast shaping up to be the virus hotspot in the UK, where cases rose to 1,950 on Tuesday, despite testing of only hospitalised patients.

Coronavirus cases have risen sharply from 373 a week ago and as a result Prime Minister Boris Johnson said Monday the British public should avoid "unnecessary social contact" and keep away from pubs, restaurants and other social haunts. This is 'a very British' form of 'lockdown' in its own right, although one that could potentially be formalised and enforced at a later date. The government is set to announce further measures Tuesday.

"The system is coming under enormous pressure as those who can are tapping the full extent of their credit lines and as banks are running to central banks for support. US large banks tapped the Fed’s lending window yesterday and a number of countries were out with hefty efforts to get ahead of the solvency contagion risk. France moved aggressively on that front with a raft of measures and Sweden blasted an enormous support bazooka at the economy as it has proven tardy in enacting the shutdown measures other EU countries began in previous days," says John Hardy, head of FX strategy at Saxo Bank. 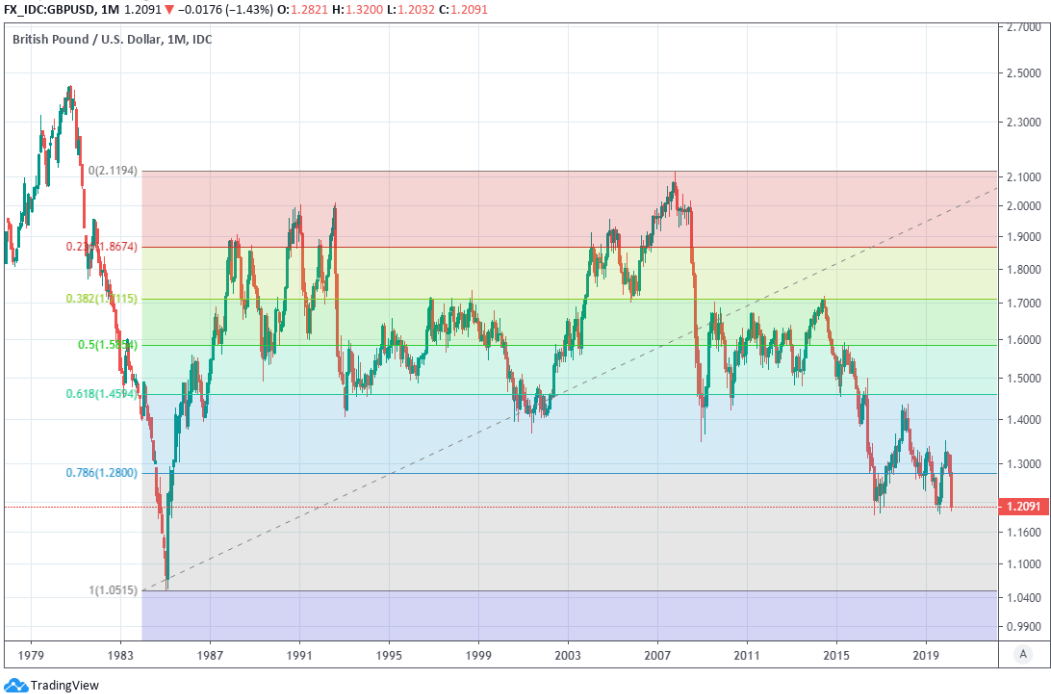 Two-year British bond yields fell Tuesday while 10-year yields rose for a sixth consecutive day, with the latter +12.2% move being far above the 3% increase seen in Germany but close to the 14.3% of Spain and the 23.7% jump in France. Both latter countries are under a draconian lockdown. Some investors bought stocks on the FTSE Tuesday, although the domestic markets have underperformed international counterparts of late.

Combined this could indicate capital outflows or a so-called buyers strike on UK assets, which would contribute to the ongoing losses in Sterling. The Pound has found little if any support on both the good days and its bad days of late, with neither improved risk appetite nor increased risk aversion enough to generate a sustained bid for the currency that's inceasingly being pushed to levels consistent with 'no deal Brexit' fears being at their most palpable

"We add to that [short position] and consider the potential for GBP to reach, what is in our view, it’s Hard Brexit equilibrium of 1.15-1.18. This is not because of Brexit, but it is also a level at which the UK's current account starts to turn into balance (with risks, it is even lower given the current environment). Finding this balance (and a lower pound with it) will be key, as low market risk appetite will make foreign investors more reluctant to fund the UK's current account deficit."

Rochester is looking for Sterling's woes could drag the Pound-to-Dollar rate down near to 1.15 in the weeks ahead but once the British currency is below 1.1958 it will have snapped the September 2019 uptrend and previous to that, there were only downtrends visible on the charts over multiple horizons. Observers have to go as far back as 1985 to find the genesis of the last remaining uptrend that's still alive but that won't offer the Pound-to-Dollar rate any support until the 100% retracement around 1.0515.