- GBP retains initiative on charts but will struggle to best 1.3180.

- Support for Conservatives has ebbed broadly, the pollsters say.

- While USD set to remain on front foot amid strong growth figures.

The Pound rose strongly against the Dollar last week and is poised for further gains, according to analysts studying the charts, although election headlines have turned into a headwind and could weigh on the British currency in the days ahead while the Dollar is being tippped to remain on its front foot.

Sterling gained almost a full percent on the greenback last week, making it the second best performer among major currencies, after being aided by YouGov predictions of election victory for Prime Minister Boris Johnson. It's now up almost 9% from its early-September lows beneath the 1.20 handle and is tipped to retain the intiative in the days ahead. 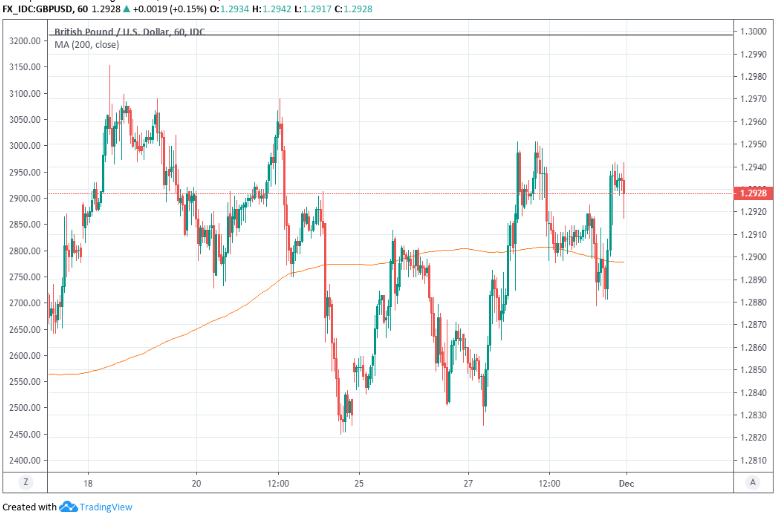 Jones', who studies trends and momentum on the charts rather than economic fundamentals or election polls, says the Pound could hit 1.3187 in the coming weeks - its highest level since May over the coming weeks and months.

However, she anticipates weakness over the next one-to-three weeks that could take the Pound back down toward last week's lows where she has advocated that Commerzbank clients step in and buy the exchange rate.

The 1.3187 level is also being billed as "tough resistance" that is likely to prove insurmountable for the Pound. Jones says the trend in the market will remain negative so long as the market is capped by that level. 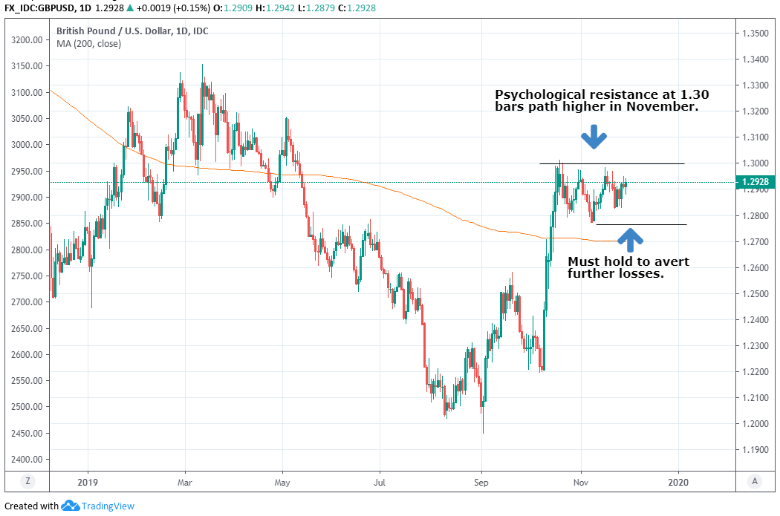 The Pound gained almost a full percent against the Euro and Dollar last week after being boosted earlier by YouGov projections suggesting Prime Minister Boris Johnson is on course to win a solid majority in next month's election, but it enters the new week at risk of declines.

Sterling is expected to continue taking its cues from election headlines this week, although they may have turned negative for the British currency over the weekend with polls having shown support for Prime Minister Boris Johnson ebbing less than a fortnight away from the December 12 vote. Support for the opposition Labour Party has risen and helped close some of the gap between the two, bringing Johnson's lead down notably with some pollsters.

Either the polls are wrong or the squeeze is on#ge2019

The poll disappointment comes with analysts increasingly suggesting the Pound is running out of road and that further upside would require an actual Conservative Party victory at the election.

"Despite the growing likelihood of a Conservative majority, sterling has only edged higher in recent weeks. We think that the pound could rise further if the party wins a majority, but that its stance on Brexit limits the upside for now," says Oliver Allen at Capital Economics, in a note to clients last week.

Currency markets favour a Conservative government because its manifesto would negate the threat of a 'no deal' Brexit and, some say, enable the economy to move on from the current stage of negotiations that has paralysed the Bank of England and some businesses.

Another part of the bias comes from fears about the opposition Labour Party, whose economic and political agenda could send the Pound as low as 1.20 against the Dollar if the party wins the election, according to Capital Economics.

"Two of the three probable outcomes, a Conservative Party majority or an alliance of parties that favoured a second referendum, point to GBP upside while a hung parliament would point to a sharp decline. Although the scale of the downside move is potentially large, we think the probability we would attach to a hung parliament outcome is far outweighed by the other two possibilities. On balance, it points to GBP upside," says David Bloom, global head of FX research at HSBC. "Nonetheless, although we think a higher GBP is the more probable path based on the evidence of the current polls, if we are wrong, the downside could be greater than the topside."

There are no major economic figures expected in the week ahead although IHS Markit will releases its PMI surveys of the services, manufacturing and construction industries, although the importance of them has been reduced by the addition of the new 'flash' surveys to the calendar toward the end of each month. November's flash PMI pointed toward another contraction in the final quarter for the UK economy.

The Dollar Index closed out the week on a soft footing after a last minute surge by the Euro but is still dominating most rivals, especially its low-yielding counterparts, and some analysts are looking for the relatively strong U.S. economy to keep the Dollar on its front foot in the days ahead.

Dollar price action will be determined on the one hand by developments on the international trade front and on the other hand by economic data that is again setting the world's largest economy apart from many of its rivals.

President Donald Trump signed the Hong Kong Human Rights and Democracy Act last week while the White House was also reported by Reuters to be exploring new ways of restricting Huawei's access to U.S. technology. It's also set to announce on Monday an eagerly-awaited outcome of an investigation into the French digital services tax whic will be sure to garner the market's attention.

The White House has previously threatened to impose trade tariffs on imports of goods from Europe in response to the French levy, which it suggests is in defiance of agreements on dual taxation so the Monday decision is important. Any decision to impose trade tariffs on EU goods in retaliation over the new tax, which will mainly impact U.S. tech companies, would be likely to draw a response from the European Commission but could lift the Dollar because such an event would likely weigh on the Euro.

"The USD is well placed to strengthen further in the near-term. We expect current low FX volatility conditions to continue in the week ahead. It provides a favourable backdrop for higher yielding currencies such as the USD, says Derek Halpenny, head of research, global markets EMEA and international securities at MUFG. "EUR/USD breaking below 1.1000 would be important bullish technical signal for the USD. The SPD leadership election result this weekend could trigger euro selling as well."

U.S. economic data will also draw close scrutiny given how recent figures have discouraged markets from betting too heavily the Federal Reserve (Fed) will cut rates again any time soon. Official data revealed last week the U.S. economy actually picked up steam in the third quarter rather than slowing as many thought that it had and as the Bureau of Economic Analysis intially said it had. 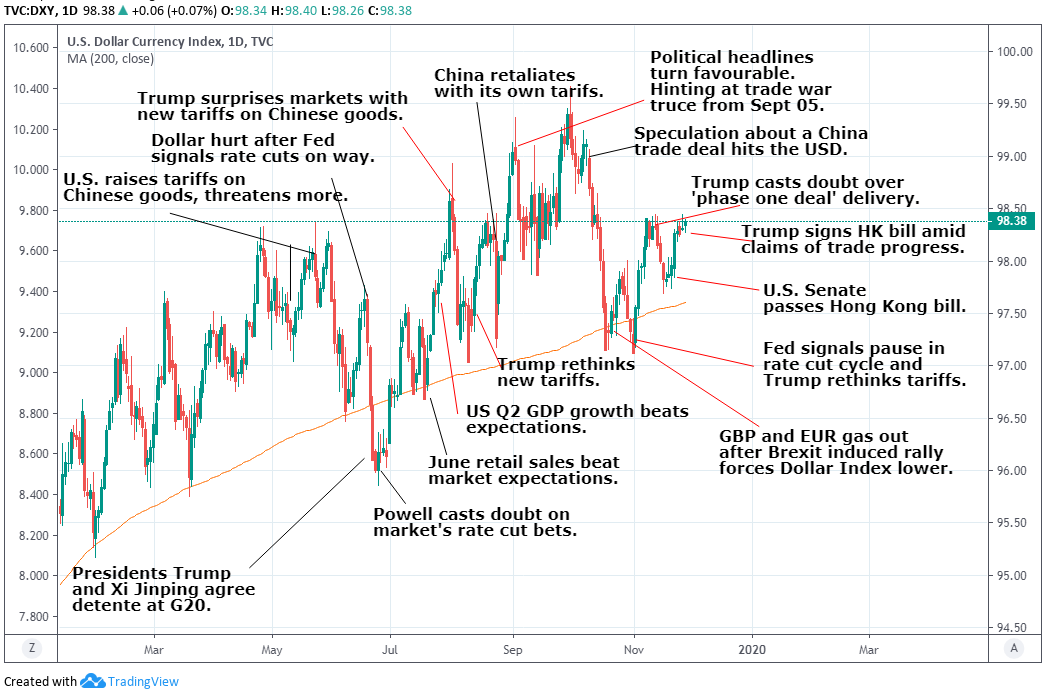 Meanwhile, the Federal Reserve Bank of Atlanta said last Wednesday its 'GDPNow' estimate of final quarter growth rose to an annualised 1.7% this week, up from just 0.4% for the week ending November 19. Investors will get another dose of figures this week that should give them a better idea of how the economy has performed thus far in the final quarter, with the Institute for Supply Management (ISM) survey of the manufacturing and services industries as well as the November payrolls report all due.

"After bouncing off decade lows last month, the market expects ISM manufacturing to continue recovering towards 50, though the weak regional Fed surveys for November place some downside risk around this estimate. Non-farm payrolls are always important, but the Fed will be watching this particularly closely to assess whether recent easing has started to bear fruit. Consensus is at 190k for employment growth and a flat-line in unemployment at 3.6%," says Daniel Been, head of FX research at ANZ.

Fed Chairman Jerome Powell, as well as other policymakers, has recently said the economy and interest rate settings are “in a good place” and that it would take a “material reassessment” of the outlook to change that view. In other words, anything less than truly dire ISM and payrolls numbers might simply entrench the Dollar's bond yield advantage over lower-yielding currencies like the Euro, Japanese Yen and Swiss Franc.

Julius Baer, a Swiss private bank, wrote last week that the greenback is primed to advance on all of those low-yielding currencies in the coming days and weeks, citing technical studies of trends and momentum on the charts.

"Combining the negatively yielding currencies and comparing them to the US dollar, we see that an inverted head-and-shoulders pattern is unfolding. As long-term momentum is bottoming, one should expect further gains in the US dollar and possibly a rise to the alltime highs from the year 2002," says Alexis Chassagnade, a technical analysis at the Swiss private bank.