- U.S. economy picked up in third-quarter - DID NOT SLOW.

- But the Chicago PMI and October PCE inflation disappoints.

The Pound-Dollar rate retreated from an intraday high as the greenback built on already-broad gains Wednesday after Bureau of Ecomic Analysis (BEA) revealed the U.S. economy actually gathered steam in the third-quarter, contrary to popular belief, although there could be more downside ahead for Sterling.

BEA figures revealed in the noon session that third quarter GDP growth was actually 2.1%, up from 2% in the prior quarter, although markets had previously been told it was only 1.9% and had looked on Wednesday for that number to be left unrevised. The implication is that U.S. growth did not slow in the third quarter, which is significant because signs of stress in the domestic economy were instrumental in the October decision of the Federal Reserve (Fed) to cut interest rates for a third time this year.

"US durable orders showed a bit more durability than we thought in the face of an auto strike and global growth headwinds," says Avery Shenfeld, chief economist at CIBC Capital Markets. "Q3 GDP got a surprise upward revision to 2.1%, but excluding inventories, GDP growth was unchanged at 2.0%. The pickup in durable orders is somewhat negative for fixed income today."

The data was released alongside the Census Bureau estimate of 'durable goods orders' received by the nation's factories during October, which both came in a far ahead of market expectations.

"Orders ex-transportation were boosted by the surprise jump in core capex orders, reversing almost all the decline of the previous two months. Machinery and computers accounted for most of the increase, which looks unsustainable," says Ian Shepherdson, chief U.S. economist at Pantheon Macroeconomics. "Elsewhere, Q3 GDP growth was revised up to 2.1% from 1.9%, above the consensus forecast for no change. Faster inventory-building and a smaller plunge in business investment in structures accounted for all the revision." 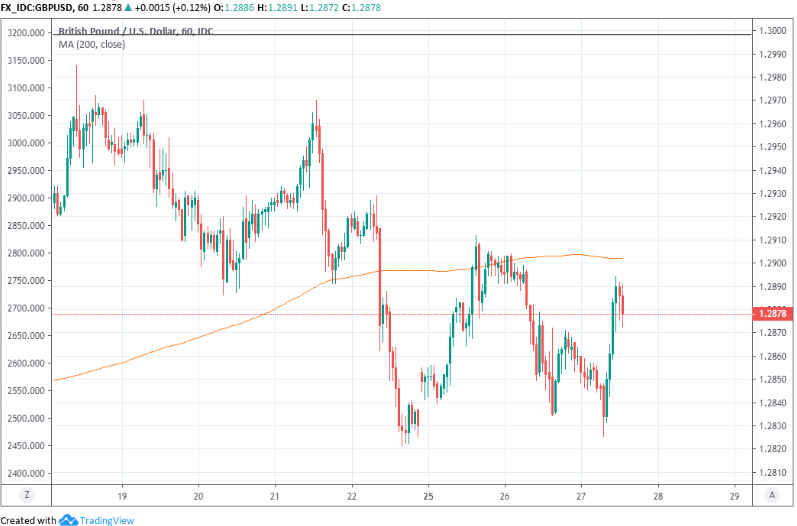 The data suggests clearly and contrary to popular belief that the U.S. economy actually picked up steam in the third quarter rather than slowing as many had come to believe and as the BEA had previously suggested.

That's good news for the Dollar although its gains were tempered later in the noon session by the October PCE Price Index and November Chicago PMI, both arguable more important than the earlier releases.

The MNI Chicago PMI surprised on the downside when it rose from 43.2 to only 46.3, because markets had been looking for an increase to 47.2. The index, which is compiled by the Institute of Supply Management, is a leading indicator of activity in the third largest U.S. city and its modest rebound this month may have tempered any newfound optimism about the economy.

Meanwhile the PCE price indices, which are the better inflation measures according to the Federal Reserve, also surprised on the downside. October's core PCE price index rose by just 0.1% when markets were looking for a 0.2% gain, which has pushed the annualised rate down from 1.7% to 1.6%, further away from the Fed's 2% target.

The PMI and PCE data suggest less inflation pressures and slower growth in the fourth quarter, which is hardly positive for the Fed rate outlook although the absence of a third-quarter slowdown might be enough to prevent investors betting too heavily on a fourth rate cut being delivered any time soon.

It might also matter to markets that the Federal Reserve Bank of Atlanta said Wednesday its 'GDPNow' estimate of final quarter growth rose to an annualised 1.7% this week, up from just 0.4% for the week ending November 19.

Fed Chairman Jerome Powell, as well as other policymakers, has recently said the economy and interest rate settings are “in a good place” and that it would take a “material reassessment” of the outlook to change that view. 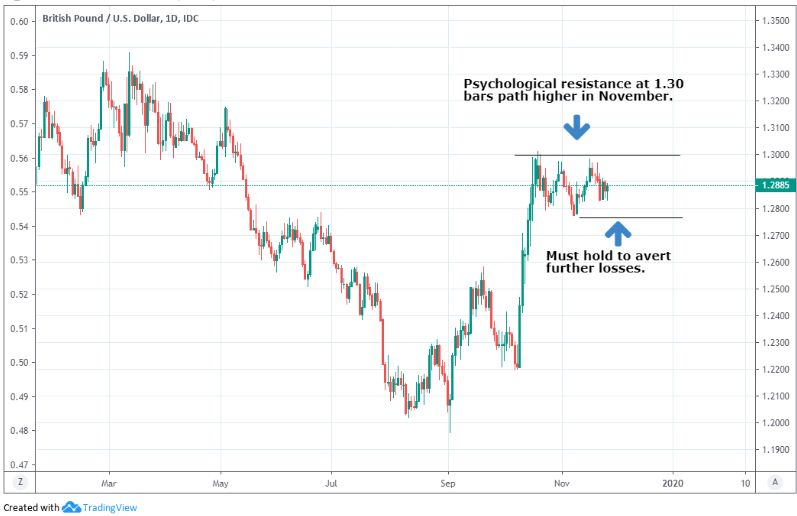 Above: Pound-to-Dollar rate shown at daily intervals and annotated with Commerzbank support and resistance levels.

Meanwhile, pre-election dynamics are again at work on the Pound this Wednesday with the British currency in retreat from session highs in the wake of the U.S. data, but ahead of the 22:00 release of YouGov polling data.

YouGov figures will include ‘MRP’ projections of support for the main parties and how that will translate into parliamentary seats. Most polls have so far focused on the popular vote and used rules of thumb to estimate implied numbers of seats but the Yougov methodology on seat numbers is a bit more scientific.

Sterling wants to see the governing Conservative Party retaining or even building upon its popular support as well as being on course for a solid parliamentary majority.

Jones, who studies trends and momentum on the charts rather than macroeconomic fundamentals, told clients Wednesday to sell the Pound-Dollar rate if it recovers to the 1.2950 level and to target a move down to 1.2525 in the weeks ahead. Her outlook lends technical support to view advocated by analysts at MUFG, who’ve been looking for pre-election dynamics to push the exchange rate down to 1.26 ahead of the December 12 ballot.

“Pro-sterling sentiment has waned over the last week as markets take note of a possible narrowing of the Conservatives’ lead in the polls over Labour,” says Shaun Osborne, chief FX strategist at Scotiabank. “A lead of ten-plus percentage points with two weeks until the election may very well lock in a Tory majority and give a boost to the pound. On the other hand, sterling may post a significant loss if the poll puts the Labour party within 8 or fewer percentage points from the Conservatives.”