- Quantitative easing to be restarted at Federal Reserve

The U.S. Dollar is being forecast to trend lower over the course of 2020 by analysts at Union Bancaire Privée, a Swiss private bank.

In their investment outlook for 2020, UBP say they see the now-overvalued Dollar moving lower in response to the U.S. economy slowing faster than many in the market are currently expecting, which will in turn prompt the U.S. Federal Reserve to provide support by cutting interest rates further, and even restart their money-printing programme.

"We believe that the uptrend has nearly run its course and that the Dollar will depreciate modestly in 2020, reflecting slowing U.S. growth and falling inflation, rate cuts by the US Federal Reserve, and an overvalued US currency," says Michael Lok, UBP Group CIO and Co-CEO Asset Management in Geneva.

The UBP predictions for Dollar weakness come as foreign exchange analysts lay out their expectations for 2020, following what has been another year of strength for the U.S. Dollar.

The currency has appreciated against six of the world's top nine freely-traded currencies, with the Canadian Dollar, Pound and Yen being the only major currencies managing to eke out gains against the Greenback thus far in 2019. 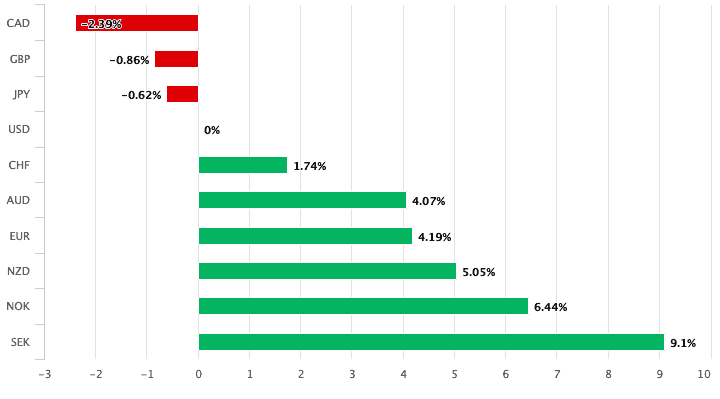 Above: Relative performance of the Dollar in 2019, image (C) Pound Sterling Live.

The Dollar index - a measure of broad-based Dollar strength according to its performance against a basket of currencies - shows it has been climbing since 2018. However, a top in the rally has been reached over recent weeks, coinciding with improved investor optimism: 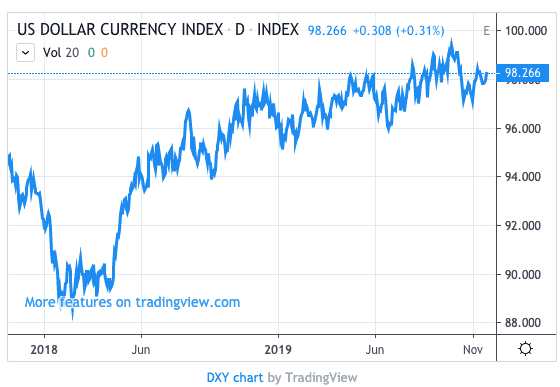 Above: Dollar index performance since 2018

A potential stalling in the Dollar's rally comes as market expectations for a 'phase 1' trade deal to be reached between the U.S. and China have grown of late, with authorities in China and the U.S. suggesting something might be signed by Christmas, or early 2020.

"When risky assets are moving up the U.S. Dollar tends to fall. Likely for this reason, sentiment around the Dollar has turned increasingly bearish as global equities have made new highs," explains Zach Pandl, a foreign exchange strategist with Goldman Sachs in New York. (See Goldman Sachs + HSBC views on the Dollar here).

However it is not just external factors that must be watched when it comes to gauging expectations for future Dollar performance: the U.S. economy must of course also be considered as developments here will likely determine where the U.S. Federal Reserve moves interest rates.

"We expect the Fed to carry on cutting rates, as U.S. growth and inflation continue to decline in 2020," says UBP in a their Investment Outlook 2020 research note.

The rule-of-thumb in foreign exchange is that when a central bank cuts interest rates, the currency it issues declines in value.

But, it is not just interest rates that the Fed can control, printing of money and buying up assets such as government bonds is another effective way of controlling the economy. This is known as quantitative easing, and again the rule-of-thumb goes that printing money puts downside pressure on the currency.

UBP says there is a good chance the Fed will start up its quantitative easing programme again in 2020, something that feeds into their expectation for a weaker Dollar.

"The Fed may also resume its quantitative easing programme, since instability in U.S. money markets in late 2019 indicates that the Fed has over-tightened monetary policy," says UBP. "Lower interest rates combined with renewed bond purchases appear necessary to stabilise money markets, and both factors are likely to weigh on the USD in 2020."

Furthermore analysts at the Swiss bank say their research shows the Dollar to be overvalued relative to other currencies, "growth, inflation and monetary policy trends stand in stark contrast to the USD’s valuation," says UBP. 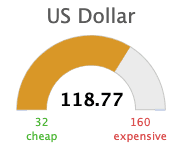 Above: The effective exchange rate of the U.S. Dollar has it flashing in the expensive region on Pound Sterling Live's tracker.

"The USD is currently trading at multi-year highs in trade-weighted and real effective exchange rate terms. It will be difficult for the currency to rise materially from its current elevated levels," says UBP.

Above: The effective exchange rate of the Dollar shows it to be at historically high levels, further strength becomes increasingly difficult to achieve from here.

The Currencies that Could Benefit on USD Decline

If the U.S. Dollar is going to go lower, there must be some currencies that stand to benefit, perhaps moreso than others.

The so-called safe-haven currencies like the Swiss Franc and Japanese Yen are expected to underperform under such a scenario.

However, movements against the Franc and Yen are difficult to predict says UBP owing to the unknown of the U.S.-China trade war.

Weakening global growth, falling inflation and muted inflation expectations and trade war concerns could "add another layer of complexity to the picture. As a result, we believe that the USD will generally weaken on a trade-weighted basis, but traditional safe havens should outperform. This means that we expect good performance from the likes of JPY, CHF and gold," says UBP.

UBP forecast the Pound-to-Dollar exchange rate to trade towards 1.35 and may even reach highs of around 1.40.

The Dollar-Yen exchange rate is forecast to move to towards 100, "with downside risks."

UBP forecast the Dollar-Franc rate can move close to 0.95.