- USD rises across board ahead of Fed decision as doubt hits market.

The Dollar strengthened against all major rivals Wednesday as markets awaited the latest Federal Reserve (Fed) interest rate decision with bated breath, after months of speculation about the outlook for U.S. monetary policy set a high bar that must now be overcome in order to weaken the greenback.

Consensus is looking for the Fed to cut its interest rate from 2.25% to 2% on Wednesday, although barring a surprise decision to leave rates unchanged or to cut by more than 25 basis points, it's the so-called dot-plot of projections for rates in the years ahead that will garner most of the market's attention.

Investors will also scrutinise Chairman Jerome Powell's accompanying statement and any comments from the subsequent press conference closely for clues about the outlook for rates. The decision is due to be announced at 19:00 London time and will be followed by a press conference at 19:30.

"The persistent strength of the US dollar is more likely to remain unless the Fed cuts rates more aggressively or President Trump takes matters into his own hands to weaken the weaken the US dollar through intervention. We do not expect the Fed to shift to a more aggressive easing stance at tonight’s FOMC meeting," says Lee Hardman, a currency analyst at MUFG. 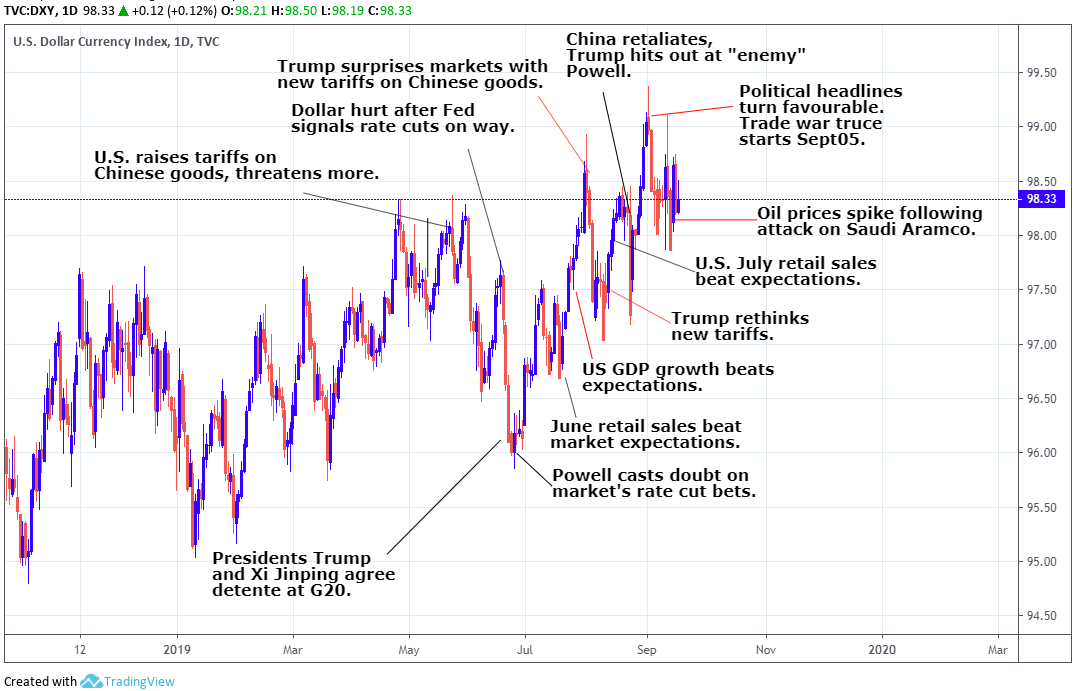 Wednesday's decision will be a landmark moment for the Dollar and all other exchange rates because investors have priced nearly five rate cuts from the Federal Reserve into the money market 'curve' for the next year, which sets a high bar that must be overcome if the Dollar is to be weakened by September's decision. Bets on U.S. rate cuts have escalating rapidly since May, in tandem the U.S.-China trade war that has flared repeatedly of late.

"The Fed should deliver a 25bp rate cut and reassurance to do more. The dot plot should reveal several FOMC voters projecting 75bp of cuts this year, and yet offer less clarity around future moves. We expect two dissents. That's the playbook for today's meeting, which should reinforce USD strength against most of the low-yielding currencies. It's a hawkish cut, leaving positioning and expectations to dictate the knee-jerk response," says Mark McCormick, head of currency strategy at TD Securities.

Market positioning already favours about as many rate cuts as the Fed could manage in the year ahead, so anything the bank says or does Wednesday that contradicts the market's view would risk strengthening the Dollar even further. The Fed will publish a 'dot plot' of Federal Open Market Committee projections for the Fed Funds rate over the coming years, which markets will use to gauge how accurate their bets on the anticipated rate cuts are likely to be.

The Fed has slowly shifted its interest rate stance this year because tariff fight between the world's two largest economies has driven a slowdown in global growth that the bank says could easily blowback and hurt the U.S. Policymakers first decided in January to be "patient" before raising rates again and eventually cut rates 25 basis points in July, leaving the Fed Funds rate at the prevailing 2.25%. But official data has shown only limited blowback from both the global slowdown and the tariff fight with China. 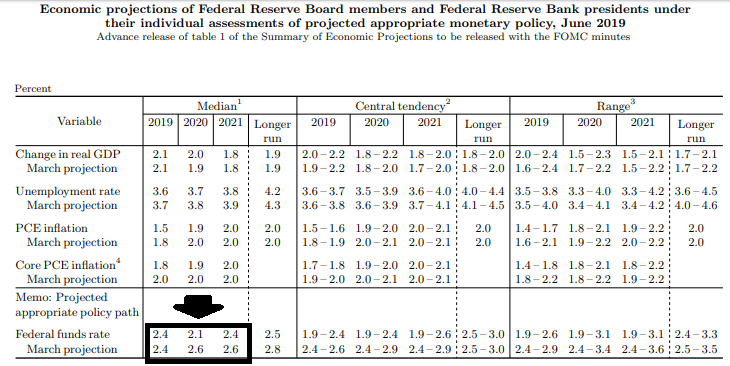 "The OIS market already discounts roughly five rate cuts over the coming year, with 120bp baked the cake. As we noted yesterday, that doesn't entirely jive with the read of Nowcast models, data surprises, and financial conditions. Instead, the current macro conditions don't satisfy a recession-focused narrative. Still, there are other things the Fed has to contend with like geopolitics and, more recently, the surge in money market rates," McCormick says.

Fed data revealed Tuesday that industrial production, which includes output from the trade-sensitive manufacturing sector and a range of other industries, rose in August and is up thus far in the quarter when output has fallen in Europe and slowed notably in China. Retail sales have continued to grow strongly throughout the year as consumers remain undeterred from spending by the trade fight with China and GDP growth has softened only slightly.

"We see little reason for today's FOMC meeting to materially move the greenback one way or another, barring a major hawkish surprise such as leaving rates unchanged (USD much higher) or a dovish one such as cutting by 50bp (USD much lower) or an announcement that balance sheet re-growth lies ahead due to systemic reserves shortages (USD modestly lower given that market chatter around this possibility is already live)," says Shahab Jalinoos, head of FX strategy at Credit Suisse. 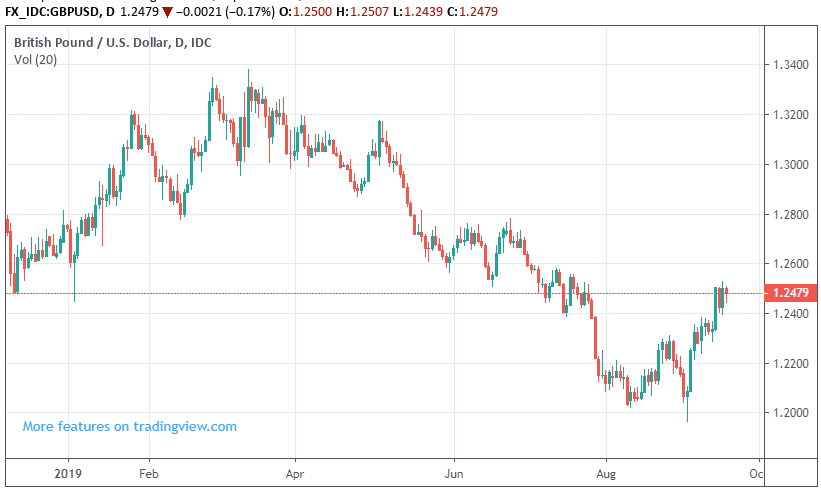 Chairman Jerome Powell has been under relentless pressure from President Donald Trump in recent months to cut rates steeply, and was even described as an "enemy" on par with Chinese President Xi Jingping in late August when he was perceived to have bucked fresh White House calls for lower rates. However, in the same late August address from Jackson Hole in Wyoming, Powell appeared to suggest he and the FOMC would take a hint from the White House.

Powell noted that inflation was rising back toward the 2% target after a long period of having undershot it, but said the bank could "try to look through what may be passing events" and simply adjust policy according to how "trade develoments" are affecting the outlook. That could have been interpreted as a sop to Trump, although even if it was, Wednesday's likely decision would still have been iobscured by the recent and ongoing truce in the trade war.

"Nothing in this speech suggests the Fed will pause in September. The hawks have been vocal recently, but they seem still to be outnumbered," wrote Ian Shepherdson, chief economist at Pantheon Macroeconomics, in August.