- But USD to decline into year-end as Fed cuts further, Trump weighs.

The Dollar was on its front foot Monday as investors continued to reappraise the Federal Reserve (Fed) interest rate outlook in the wake of last week's nonfarm payrolls report, although analysts at MUFG have tipped the greenback for further gains in the coming days.

America's Dollar is in the process of reversing June's losses to its major rivals after official data showed the economy creating jobs at a rapid clip in June, leading markets to wonder if the dire numbers from May were simply a blip within a broader and still-positive trend.

Friday's data and Monday's price action is important because Fed Chairman Jerome Powell will have numerous opportunities this week to update the market on the bank's thinking about the interest rate outlook, and markets have bet the house that the Fed will cut U.S. borrowing costs at the end of the month.

"The payroll report doesn't answer any long-term questions about the US economic slowdown, but it does make a 50bp rate cut at the end of this month very unlikely. We get to hear from Fed Chair Powell tomorrow, Wednesday and Thursday, and we get FOMC Minutes on Wednesday as well as CPI data on Thursday," says Kit Juckes, chief FX strategist at Societe Generale. "We all agree that a 25bp cut is coming."

May's paltry 75k increase in new jobs, which was followed by a 224k increase in June, saw markets speculate the economy was about to roll over and that a dramatic about-turn by the Fed on interest rate policy was necessary. 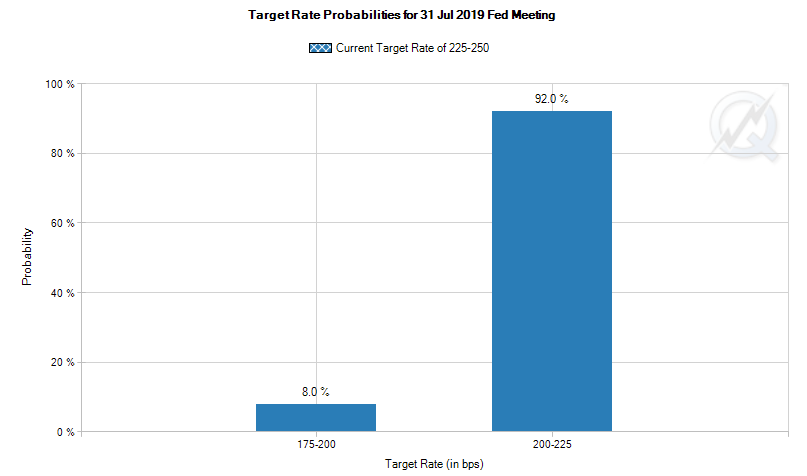 Above: CME Group's market-implied probability of one (right) and two (left) rate cuts in July.

For much of June investors were betting the Fed would slash its interest rate by as much as 50 basis points to 2% as soon as the end of July, although investors have since come to coalesce around the idea of a 25 basis point cut.

The Fed lifted U.S. borrowing costs four times in 2018, leaving the Fed Funds rate range at its current 2.25%-to-2.5%, boosting the appeal of U.S. assets in the process and helping to lift the Dollar by 4% against rivals that year.

May's payrolls report and the subsequent bets on a Fed capitulation saw analysts predictions of an end to the 18-month Dollar rally begin to proliferate, but the consequent decline in the Dollar Index is now being described by MUFG as a "false break" that's liable to go into reverse. 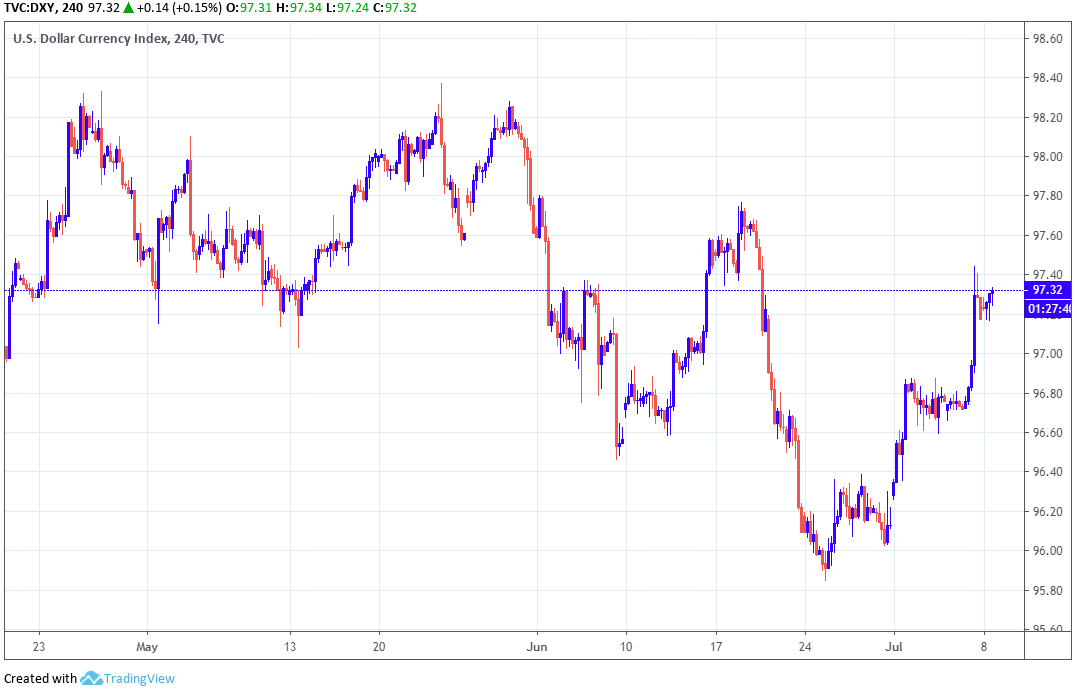 "If the Fed does not agree with the market pricing of a 25 basis point rate cut this month, then Fed Chair Powell has the opportunity to dampen those expectations this week," Hardman adds, in a written briefing to clients. "It poses upside risks for the US dollar this week."

MUFG, the world's fifth largest bank and a significant foreign exchange dealer, forecasts the Fed will go ahead and reduce U.S. interest rates by 25 basis points at the end of July and that it will cut again in September.

But the bank says the Dollar should remain on its front foot in the run-up to the July announcement and that risks are to the upside this week. Part of the reason for this is the exact level of Fed cuts this year could well be less than that recently anticipated by the market.

However, there's also a risk that Fed chairman Jerome Powell uses his semiannual testimony to Congress this week to further dissuade the market from betting on radical action. Thursday's inflation figures could also be a source of Dollar gains, especially if June's numbers surprise on the upside.

U.S. inflation pressures have waned in 2019 but both Fed Chairman Powell and private sector economists have warned that the decline could be temporary. And even with recent weakness taken into account, U.S. inflation has remained close to the 2% target thus far in 2019.

Interest rate decisions are normally only made in relation to the inflation outlook, with rate rises seeking to reduce prices by cooling the economy and rate cuts being deployed to lift inflation by stoking faster growth.

"We still expect the Fed to deliver a 25 basis point rate cut this month," Hardman says. "Nevertheless, the US dollar should continue to trade on a firmer footing in the near-term given downside risks from a larger rate cut have diminished." 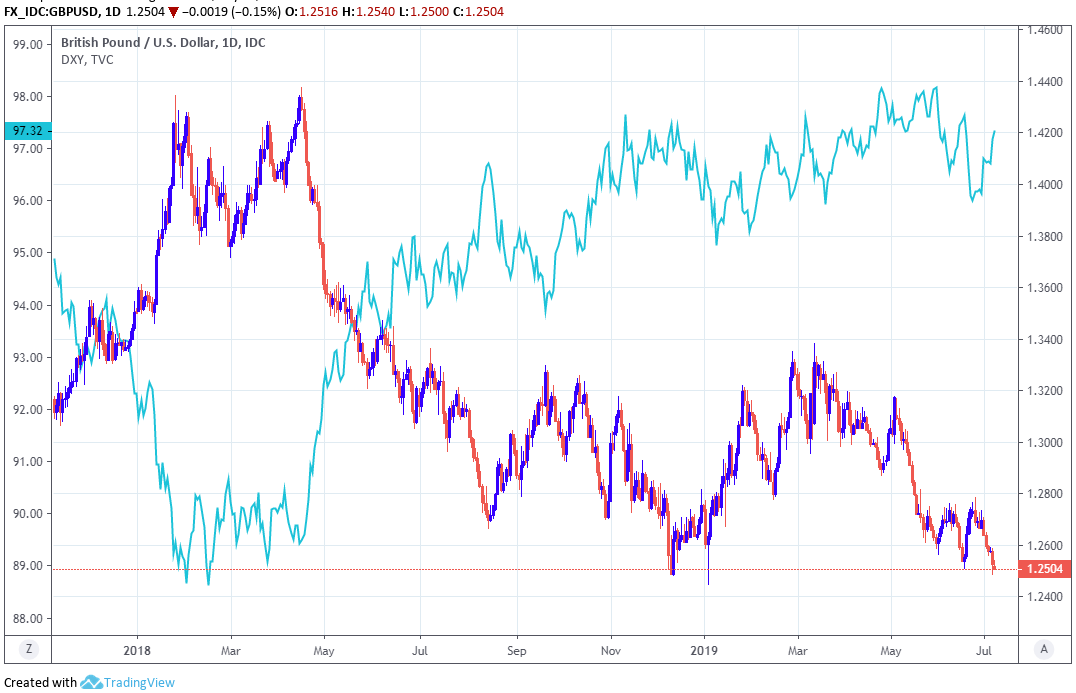 Hardman and the MUFG team are bullish in their outlook for the Dollar this week but have long been looking for the greenback to reverse 2018's gains this year, as the Fed begins to cut back its interest rate. And they're not alone in looking for a weak Dollar beyond the short-term either.

"The wild-card of FX intervention is another reason why we prefer the dollar to be topping out this summer and retain year-end forecasts for EUR/USD and USD/JPY at 1.15 and 103 respectively," says Franscesco Pesole, a strategist at ING Group, in a note to clients Monday.

President Donald Trump accused China and Europe last week of using central bank policies to gain competitive advantage over the U.S. by manipulating their currencies, before arguing the Fed should do the same. This was the latest in a long line of attempts to influence Fed policy and weaken the Dollar.

A strong or strengthening currency can be problematic because it raises the cost of exports, which risks making them uncompetitive, and creates an incentive for domestic companies and consumers to buy more imports which hurt the economy because they're a subtraction in the calculation of GDP.

Trump is up for reelection in 2020 only by then the economy is expected to have slowed sharply as 2018's tax cuts will have worn off, the trade war with China will have harmed the manufacturing sector and the nine rate hikes to have been announced by the Fed since the end of 2015 may also be taking a heavier toll on the economy.

The above combination of threats to Trump's economic record explains why the White House has increasingly lashed out at the Federal Reserve for its restrictive interest rate policy in recent months, which has now got the market attuned to the threat of direct intervention.

"Dollar strength or least the weak currencies of key trading partners of the US are certainly on Washington’s radar. So far the White House has exerted indirect pressure on the dollar via the need for Fed easing. If the dollar doesn't start to fall later in the year, we suspect pressure will grow for the US Treasury to take more direct action on the dollar," says ING's Pesole. 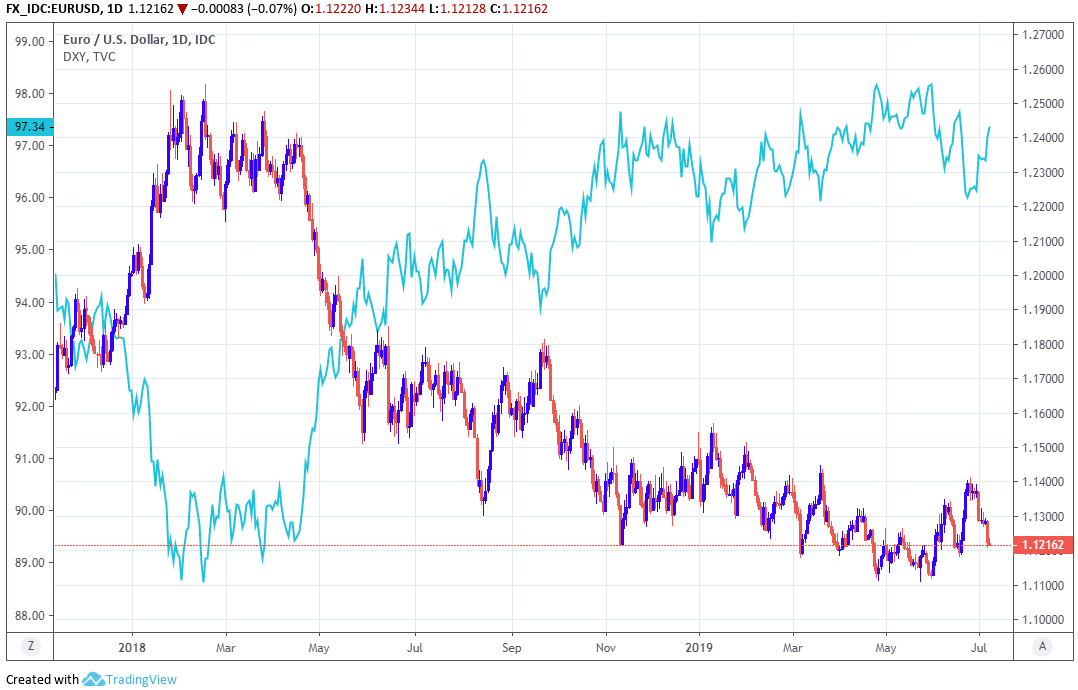