The Dollar built on earlier gains Friday after the latest nonfarm payrolls report revealed a sharp rebound in U.S. jobs growth during June, taking the market by surprise even though investors were already looking for a steep rebound.

The U.S. economy created 224k new jobs during June, up from the paltry 75k seen back in May and when consensus had been for an increase of only 162k, although the unemployment rate rose and wage growth disappointed.

Unemployment rose to 3.7% last month, from 3.6% previously, while American wage packets grew by just 0.2% when consensus had been for an increase of 0.3%. However, economists are unfazed about these two latter points.

"The US labor market came roaring back in June," says Katherine Judge, an economist at CIBC Capital Markets. "The unemployment rate ticked up but that was a reflection of the increase in the participation rate, which still has room to rise further ahead. Wages disappointed, with a 0.2% advance on the month a tick below expectations, but there was a positive revision to the prior month, leaving annual wage growth unchanged at 3.1%."

The Bureau of Labor Statistics says the actual number of individuals who're unemployed "changed little" in June while the organisation's data shows a fall in the total number iof people who're not in the labour force at all, at the same time as an increase in the number who've been out of the work force for a while but are now looking for employment.

It's the above change that explains why the 'participation rate' increased 10 basis points to 60.6% in June, which drove the increase in the unemployment rate. Previously those inactive workers would not have been considered 'unemployed' for statistical purposes because they weren't looking for jobs only now that they are searching, they've been thrown back into the jobless tally.

Above: Bureau of Labor Statistics table.

"The 224,000 gain in non-farm payrolls in June was much stronger than the consensus estimate of 160,000 and would seem to make a mockery of market expectations that the Fed will cut interest rates by up to 50bp late this month," says Andrew Hunter at Capital Economics.

Friday's data follows a dramatic slump in the pace of job creation during May that got analysts and economists fearing the U.S. trade war with China was finally beginning to bite the economy outside of the manufacturing sector, which stoked speculation of that Federal Reserve (Fed) rate cuts are imminent.

The last five years have produced four occasions on which monthly payrolls growth has been below 100k and each had seen a subsequent rebound where the economy has added between 198k and 287k new jobs, so a rebound of Friday's order was probably always likely.

"Employment growth is still trending gradually lower but, with the stock market setting new records and trade talks back on (for now at least), the data support our view that Fed officials are more likely to wait until September before loosening policy," Capital Economics' Hunter adds. 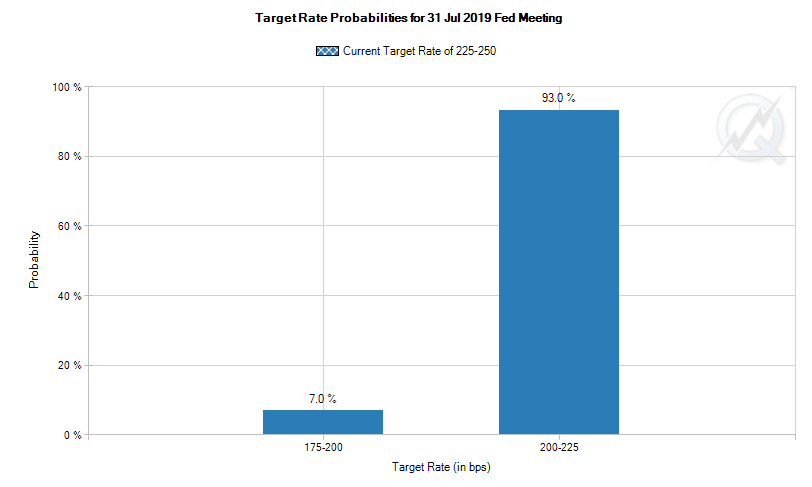 Above: CME Group estimate of market-implied probability of a July interest rate cut.

"The economy does not need the Fed to ease, but the market continues to scream for action on July 31. This Fed won’t disappoint unless the data between now and then are so clear that market expectations shift substantially. That’s entirely possible, but don’t bet on it," says Ian Shepherdson, chief U.S. economist at Pantheon Macroeconomics.

Investors have been bettting increasingly heavily in recent weeks that the Federal Reserve will cut its interest rate on July 31, which has weighed on the Dollar ever since early June when the previous payrolls report was published.

"A big upside surprise in the US data has helped the USD to extend this morning's consolidation," says Mark McCormick, head of FX strategy at TD Securities. "A positive US growth story is still good for risk assets, though it favors the USD against the low-yielders like EUR, JPY and CHF." 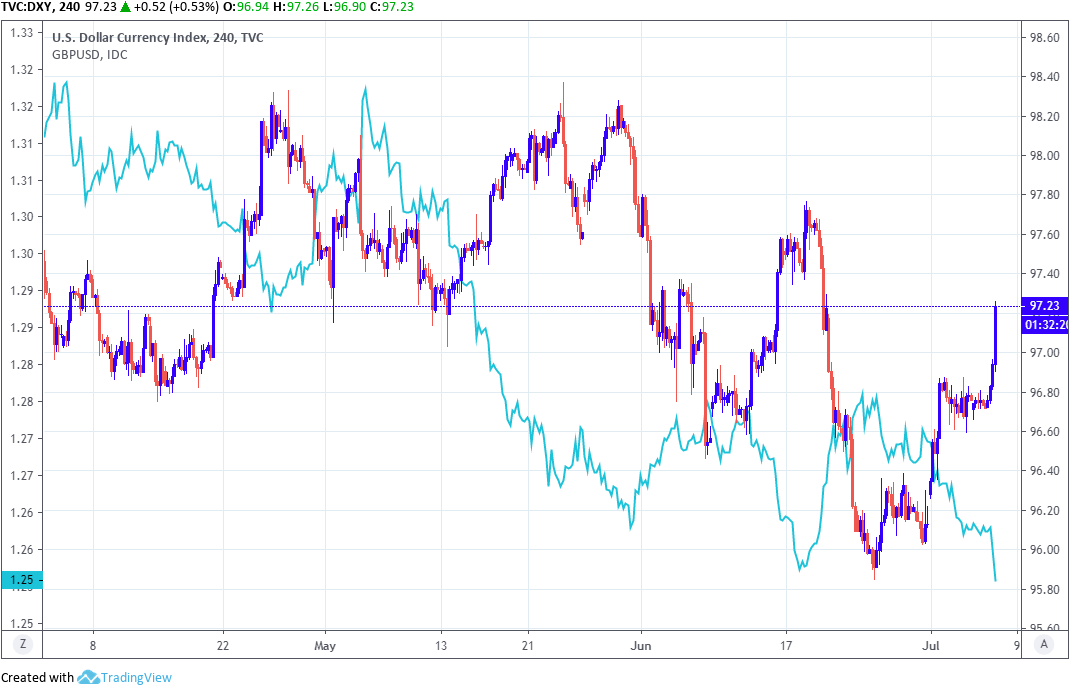 The Dolar index was quoted 0.39% higher at 97.14 following the report after having risen above the 97 handle in response to the data. It's now up 1.17% for 2019 after shedding nearly a full percentage point in the last month.

The Pound-to-Dollar rate extended losses to trade 0.47% lower at 1.2522 following the release while the Euro-to-Dollar rate baulked its way down to 1.1243, leaving it with an intraday loss of 0.37%. 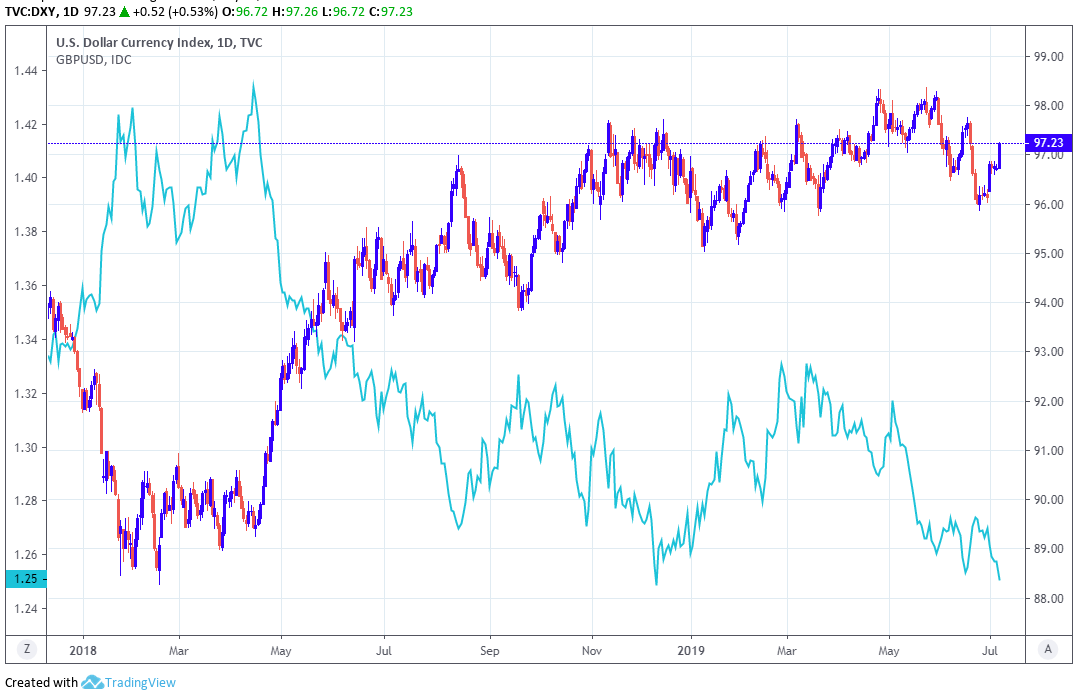 Federal Reserve Chairman Jerome Powell said in June speech the bank would do whatever is necessary to sustain the current U.S. economic expansion but that policymakers shouldn't respond to developments that might turn out to be temporary, which could have been a reference to either a 2019 fall in inflation or that month's payrolls number. The comment could have also referred to both.

Powell's remarks came as financial markets were betting heavily the Fed will cut its interest rate as many as three times before year-end in response to signs the economy is slowing, not to mention criticism from President Donald Trump, although market expectations have since been tempered by Federal-Open-Market-Committee 'dove' James Bullard who said last month that bets on three rate hikes were "overdone".

"The market narrative has been dominated lately by the question of the size of the Fed’s rate cut at the July 31 FOMC meeting, in which the majority are still looking for a 25 basis move rather than a 50 basis point chop. And they see today’s US June jobs report, especially the June Nonfarm Payrolls Change number as the possible arbiter of the Fed’s decision at that FOMC meeting," says John Hardy, chief FX strategist at Saxo Bank.

The core personal-consumption-expenditures price index, which is the Fed's preferred measure of U.S. inflation, has been below the 2% inflation target ever since December 2018 and was reported at just 1.6% in April. That might be reason enough for the Fed to rethink its interest rate policy.

The Federal Reserve raised interest rates nine times between the end of 2015 and the end of 2018, taking the top end of the Fed Funds rate range up to its current 2.5% level. However, pricing in the overnight-index-swap market now implies progressive cuts to borrowing costs are likely from here onward.