The Dollar about-turned and slumped lower during noon trading in the final session of the week after the May nonfarm payrolls report gave financial markets further grounds for betting the Federal Reserve (Fed) might need to begin cutting its interest rate soon, vindicating some analysts for their forecasts.

The U.S. economy created just 75k new jobs during May, down from 263k in April and when various third-party providers had put consensus between 175k and 185k. Unemployment was steady at 3.6%, in line with expectations, but wages rose by just 0.2%. That's below the 0.3% consensus.

"US payrolls printed weaker than expected, which will further increase bets that the Federal Reserve will be cutting interest rates before the year is out," says Andrew Grantham, an economist at CIBC Capital Markets. "Fed speakers have been hinting recently that they may be willing to cut interest rates given uncertainty around trade and tariffs, and signs of a slowing economy will further push them in that direction."

There was uncertainty ahead of the release over exactly what the market had been expecting because after the Automatic Data Processing Inc (ADP) employment report pointed Wednesday to just 27k jobs being generated last month, some analysts feared expectations of the official number had ebbed.

However, the sharp sell off seen in Dollar exchange rates after the announcement suggests expectations hadn't actually ebbed that far. The Dollar index, which is a broad measure of the U.S. currency, swapped a 0.01% gain for a 0.39% loss immediately after publication. 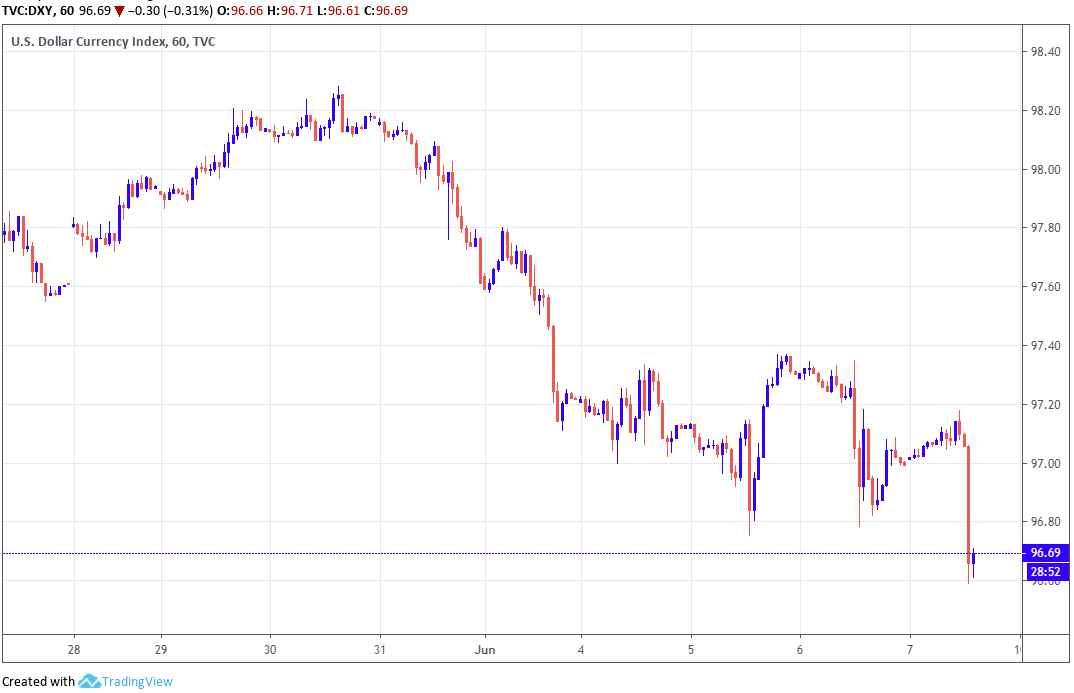 "While they are unlikely to respond to just one payrolls print, we now expect that a slower economy and continued trade uncertainty could see a cut in Q4 of this year," Grantham says of the Federal Reserve. "The weaker than expected data have seen bond yields and the US$ fall."

Adding insult to injury, the Bureau for Labor Statistics says jobs growth in March and April was slower than previously thought, before revising employment growth over the period down by 75k.

Markets care about the labour market data because falling unemployment and improving job creation are thought to put upward pressure on wages. Pay growth leads to increased demand in an economy and puts upward pressure on inflation, with implications for interest rates and financial markets.

"The soft 75,000 gain in non-farm payrolls in May wasn’t quite as bad as the dismal ADP employment reading earlier this week but, along with the downward revisions to previous months, it is another sign that economic growth is slowing," says Andrew Hunter at Capital Economics. "We still think Fed officials will want to see evidence of more sustained weakness before taking action, but we are increasingly convinced the Fed will begin cutting interest rates later this year." 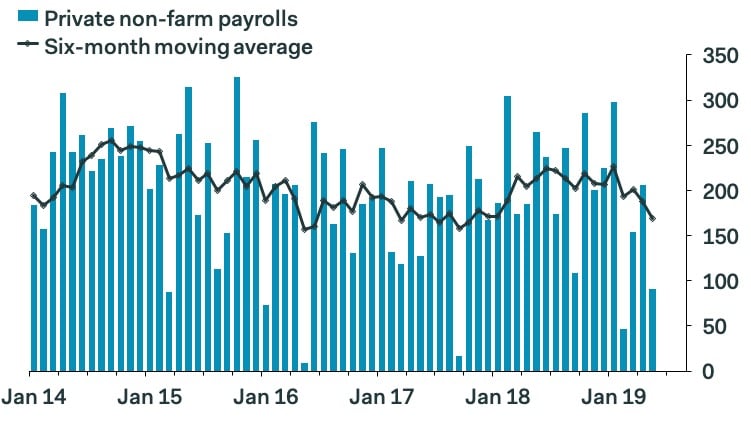 "These data make it easier for the Fed to ease either this month or next, if the trade tensions intensify and the stock market drops sharply. It’s impossible to put even a subjective probability on this, though, because that requires reading the mind of the president, upon whose whims any decisions will be made," says Ian Shepherdson, chief U.S. economist at Pantheon Macroeconomics. 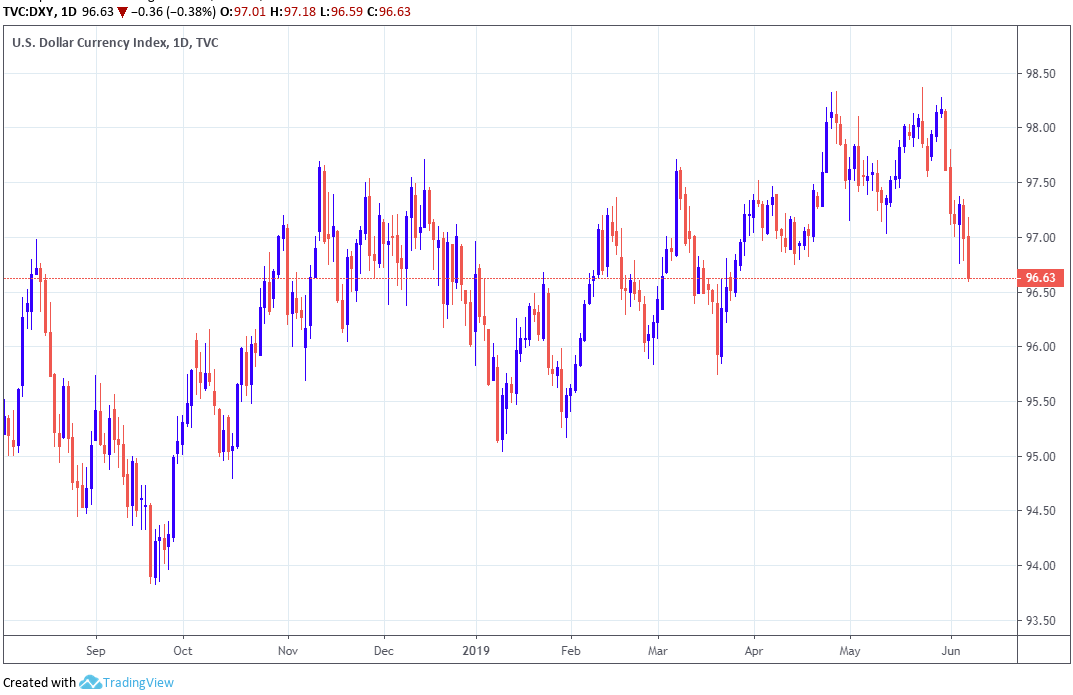 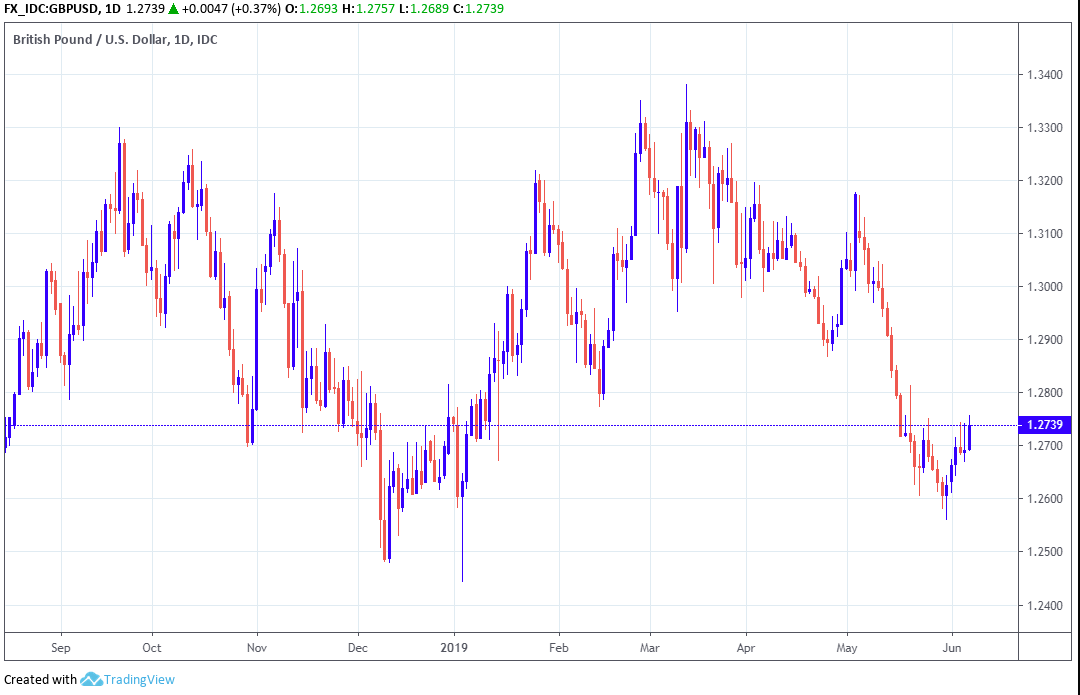 "Today’s numbers – together with the weak ISM manufacturing earlier this week – will add to the pressure on the Fed to deliver the first cycle cut in a not too distant future. Already before today’s numbers, markets were putting close to a two-thirds probability of a rate cut by July," says Kjetil Olsen, an economist at Nordea Markets.

Federal Reserve (Fed) Chairman Jerome Powell gave investors further grounds to believe the U.S. central bank could cut its interest rate before the year is out on Tuesday. Powell, who was installed in his role by President Donald Trump in early 2018, said the bank would "act as appropriate to sustain the expansion" during an event hosted by the Federal Reserve Bank of Chicago.

"The dollar hasn’t yet really responded to the marked drop in yields in the US and hence a stronger NFP print that lifts yields is, we believe, unlikely to trigger big gains for the dollar. However, a weaker than expected print on the scale that history suggests is possible in the month of May would add to the already weak dollar sentiment," says Lee Hardman, in a note ahead of the release.

That came after Federal-Open-Market-Committee (FOMC) voting member James Bullard said in a Monday address to the Union League Club of Chicago that an escalation of the U.S.-China trade war, a slowing economy and below-target inflation could mean that an interest rate cut becomes appropriate over the coming months.

Bullard's comments were made with markets already betting on two full interest rate cuts being delivered in 2019, although investors have since begun to bet that an even greater degree of policy 'loosening' is now in the pipeline.

"The press is discussing the Fed discussing a rate cut as soon as this month. Again, that would be a volte-farce, but at least it’s rapid. However, as our Fed watcher Philip Marey--who was correctly calling Fed cuts back in December, thank you very much!--argues, even an insurance cut will prove to be insufficient, especially if the threat of trade wars escalates. And it is escalating," warns Michael Every, a strategist at Rabobank.

At the heart of the market's frustration with the Dollar is President Donald Trump's trade war with China, which escalated over the recent month when the White House lifted from 10% to 25% the tariff rate charged on around $200 bn of imports from China.

Trump is also threatening to impose tariffs on all of China's remaining $300 bn of trade with the U.S. and has begun using a 'blacklist'-like tool against Chinese telecoms firm Huawei to strong-arm the government into changing it's "unfair" trading practices.

Global economic growth slowed last year when the tariff fight first broke out and analysts have been concerned what might happen to it in 2019 if the trade fight turns into an all-out economic conflict, which it's on the verge of doing.

"It is escalating, with US Vice President Pence saying tariffs on Mexico start at 5% on Monday, while Huawei is apparently working 10,000 engineers three shifts a day to work out how to strip all US components out of their phones. (Does it really take that many engineers to drop the phone in the toilet?) Indeed, the threat of a recession will most likely force the Fed to start a full-blown cutting cycle in 2020," Every writes, in a note to clients Friday. "Rabo’s recession probability model, based on the yield curve, now indicates an 83% probability of that happening by October 2020."