- USD slips ahead of crunch Federal Reserve decision and forecasts.

- Signal of indulgence would likely come through the Fed's 'dot-plot'.

The Dollar fell against many of its G10 rivals ahead of the latest interest rate decision from the Federal Reserve (Fed) Wednesday, which analysts say should validate recent bets by the market that U.S. interest rates will be cut this year.

Investors are increasingly betting the Federal Reserve will slash U.S. borrowing costs before year-end and Wednesday, at 19:00, will reveal whether the central bank is willing to indulge market concerns over the outlook for the economy.

Consensus is for the bank to leave the Fed Funds rate range unchanged at between 2.25% and 2.5% so it will be the content of the accompanying statement as well as the latest economic and financial forecasts that garner most of the market's attention.

"I suspect the Fed will more or less deliver what the market is expecting for the near term (indication of a tilt in favour of a July rate cut and adjustment to the statement to remove the  word “patient”). As for the pricing of the Fed’s rate schedule beyond July, the Fed may have a hard time delivering a message that offers clear evidence it expects to cut as much as the market now expects," says John Hardy, chief FX strategist at Saxo Bank.

The Fed said last month that a combination of "moderate" economic growth and below-target inflation would mean it could be "patient for some time" before adjusting rates again. This came after it shifted to the sidelines of the interest rate field in January, telling markets it'd be "patient" before moving again.

If the Fed is to change its guidance it would most likely use the so-called dot-plot of rate setters' projections for rates to do so, although the bank could always say explicitly that it's likely to cut. The dot-plot suggested in May that one more hike would take the Fed Funds range up to 2.5%-to-2.75% in 2020.

"The White House counsel’s office examined the legality of stripping Powell of his chairmanship and leaving him only as a Fed Governor. When asked about it yesterday, President Trump told reporters “well, let’s see what he does”," says Lee Hardman, an analyst at MUFG. "It has further increased pressure on the Fed to signal that they are moving closer to easing monetary easing at a today’s FOMC meeting. The US dollar’s recent rebound will extend further if the Fed disappoints market expectations."

"Markets currently expect around 100bp in Fed cuts over the next year while the last dot plot penciled in +25bp in hikes over the Fed’s forecast horizon. That is a large gap," says Richard Franulovich, head of FX strategy at Westpac.

Pricing in the overnight-index-swap market implies that two interest rate cuts from the Federal Reserve are a near certainty before year-end, which reflects a significant increase from the situation the existed on May 01. In May market pricing was still some way off implying that even one rate cut is a done deal.

Financial markets had bet to some degreee as far back as late 2018 that policymakers would be cutting rates before 2019 is over, due largely to expectations the U.S. economy would slow this year as the positive effect of President Donald Trump's tax cuts wears off.

However, the month of May brought with it some clear signs the trade war with China might now be hurting at least some parts of the U.S. economy, which risks compounding the slowdown that many already expected. Then the trade war also escalated further in May. 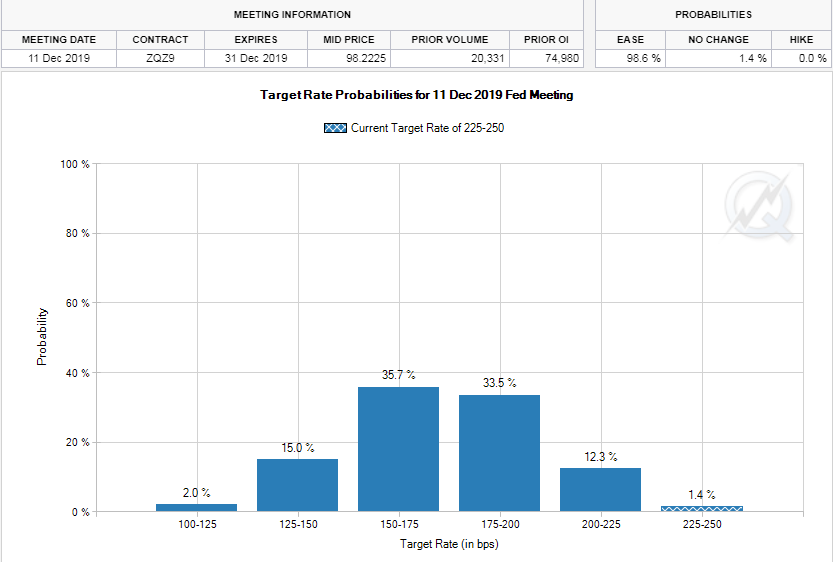 Now, CME Group data suggests that there's just a 1.4% probability that the Federal Funds rate range will remain at the current 2.25%-to-2.5% setting in December 2019, and no investors at all appear to expect that interest rates will be any higher than that. Substantially all are anticipating rate cuts this year.

"Long USD positioning has not shifted materially since the market was pricing in further Fed hikes. This makes the market vulnerable to a positioning washout on a dovish FOMC result. As such, we elect to play it safe and close our long position at 97.67, for a return of 0.3%," says George Davis, a strategist at RBC Capital Markets.

Davis closed on Tuesday, his earlier bet the U.S. Dollar index would go on rising over the coming weeks because he's concerned that if the Fed does indulge market pricing of rate cuts, then other investors who've also been backing the Dollar could be spooked into selling it.

Despite investors betting heavily in interest rate markets that the Fed will lower U.S. borrowing costs this year, the Dollar has remained relatively well supported on the currency market due to a range of factors including 'safe-haven' flows relating to the trade war.

If the Federal Reserve fails to indulge the market Wednesday then the Dollar could rise as a result and if does go ahead and vindicate investors for betting the way they have done the Dollar might fall despite such a thing already being expected, because the currency market has not yet responded to bets in the interest rate market. 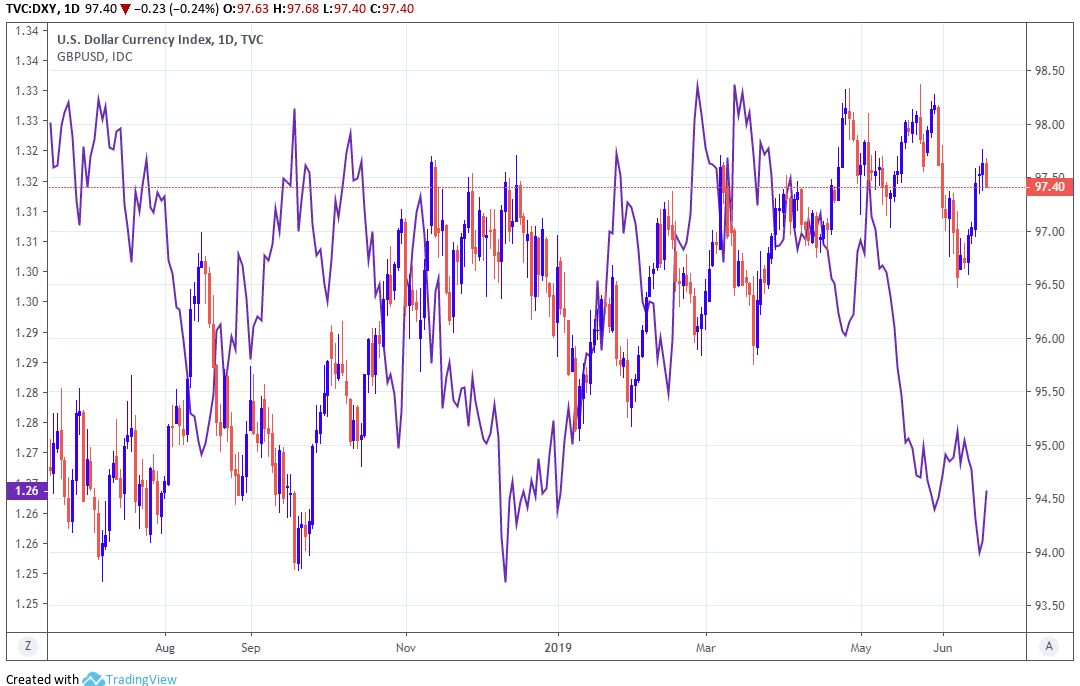 "We see further USD weakness in store. The FOMC meeting next week may reveal greater Fed concern about the underlying strength of the US economy than the market expects," says Geg Teng Khoo at Morgan Stanley, in a note to clients. "The Fed has further room to cut than many other central banks. We suggest fading any potential post-FOMC USD rally. A DXY break below lower support at 96.50 suggests further downside momentum."

The U.S. 12-month consumer price index fell from 2% to 1.8% in May and core inflation, which is seen as a truer measure of domestically generated inflation pressures because it excludes changes in commoditised food and energy prices, also surprised on the downside.

Meanwhile, President Donald Trump has reportedly been exploring ways in which he can pressure Federal Reserve chairman Jerome Powell into lowering U.S. rates in order to keep the economy growing at a healthy clip through 2020, which is an election year.