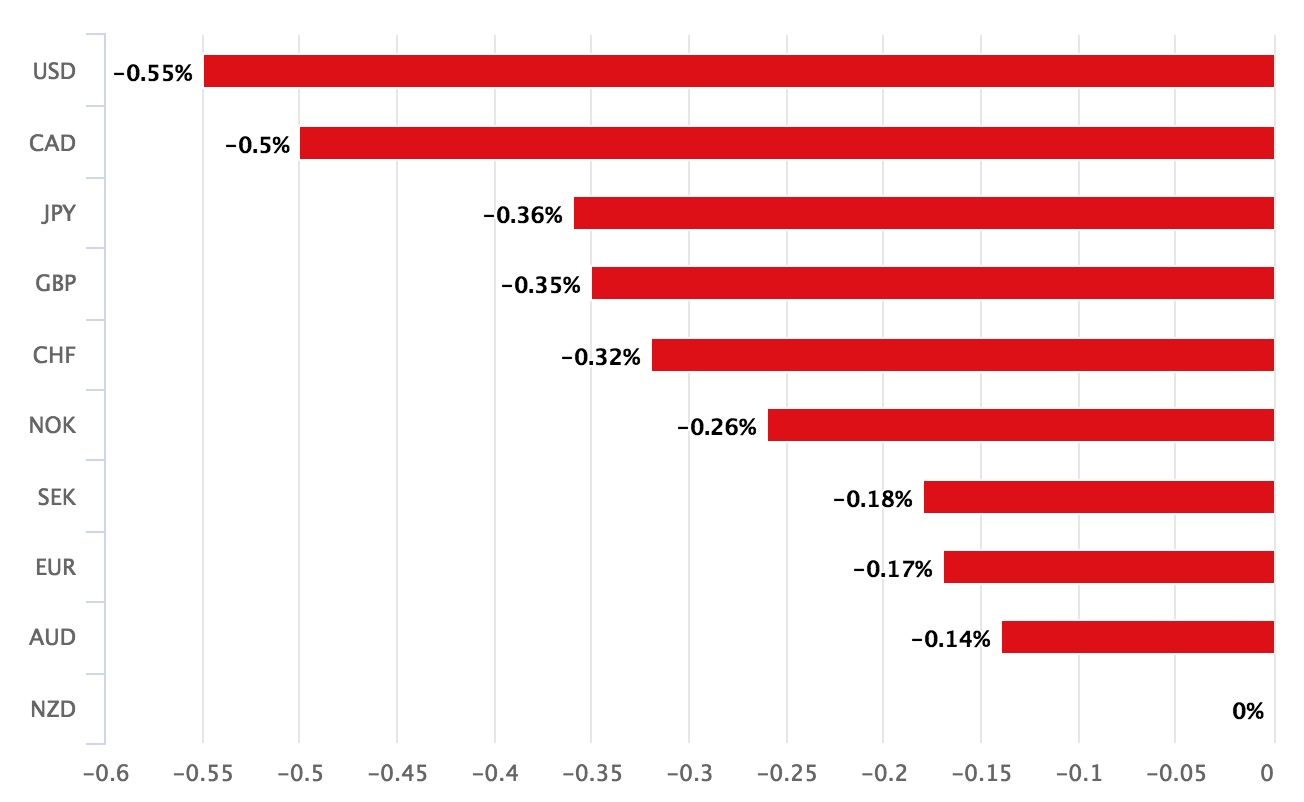 The NZ Dollar was seen to be the laggard of global foreign exchange markets a day after below-par inflation data were released and confirmed to markets the RBNZ is unlikely to move rates higher anytime soon.

There are a number of reasons for the move lower however, including a combination of a stronger US Dollar and decline in global equity prices which in turn signal 'risk-off' conditions; a scenario that typically tends to see NZD underperform rivals.

"The NZD has since declined to around 0.7265, around a two week low, in sympathy with the broader strength in the USD and decline in equities," says Nick Smyth with BNZ in Auckland, referencing the NZD/USD exchange rate.

The weakness is being felt across the board:

Above: The New Zealand Dollar is the worst-performing major currency ahead of the weekend

The Pound-to-New Zealand Dollar exchange rate is trading at 1.9483, having been as low as 1.9343 this week and the overall look-and-feel of the GBP/NZD charts suggest to us the exchange rate remains supported. 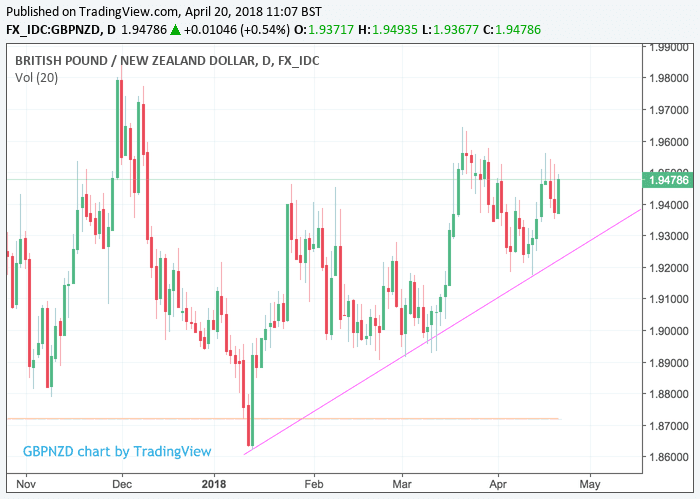 "A very sharp and sudden weakening deserves attention and could lead to more," says John J Hardy, chief currency strategist at Saxo Bank, in relation to the NZD's performance.

The New Zealand Dollar is meanwhile seen facing a 'yield problem' - a scenario whereby interest rates across the rest of the world are on course to catch up with those in New Zealand.

The NZD has been for years supported by the fact that the country had the highest interest rates on offer in the developed world which attracted vast inflows of foreign capital.

The trend is fading, particularly with little sign that the Reserve Bank of New Zealand is likely to raise interest rates anytime soon.

The value of the New Zealand Dollar briefly spiked on Thursday, April 19 on the release of the country's most recent set of inflation numbers, which were the main event on the currency's calendar the week.

Inflation tends to drive interest rate policy at the RBNZ and hence why it matters for the New Zealand currency.

The spike did however prove short-lived and it has largely been downhill for the currency since.

CPI was +0.5% and in annual terms came in as per RBNZ expectations at +1.1%, which forms the bottom end of the 1%-3% target the RBNZ is looking to achieve.

Low inflation has understandably put a lid on expectations for higher New Zealand interest rates for some time now.

Factoring in base effects (after food prices rose sharply in Q1 last year) and the fee-free first year of education, and this set of data doesn't leave too much to get excited about.

"That said, even excluding education, annual CPI fell from 1.5% to 1.3% and core inflation dropped from 1.1% to 0.9%, the first time core inflation fell below 1%/yr in 2 years. So it does appear as underlying CPI is softening in NZ," says a note from global investment bank TD Securities following the event.

Analysts at TD Securities warn momentum is starting to work against the New Zealand Dollar and a softer CPI print "should amplify the downside in the interim" and the lower-end of their estimates argue for support in NZD/USD to lie near 0.71.

The RBNZ has now held its cash rate at a record low of 1.75% ever since November 2016 and, according to pricing in interest rate derivatives markets, is not expected to raise it from here until well into 2019.