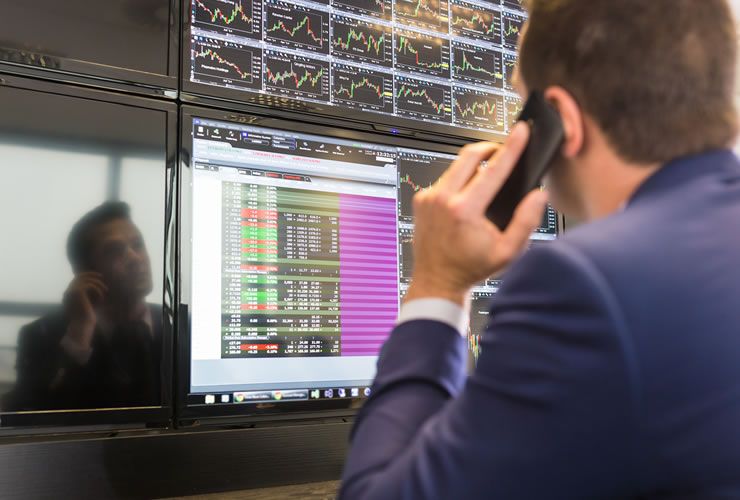 The GBP/NZD exchange rate is now closing in on the key 1.90 level and, while analysts think there is scope for further gains, the charts signal that caution is necessary.

The Pound-to-New Zealand Dollar exchange rate has broken out of its bullish triangle pattern and moved higher following the announcement that a Labour-led coalition will govern New Zealand for the next three years, just as we forecast in earlier pieces on this currency pair. 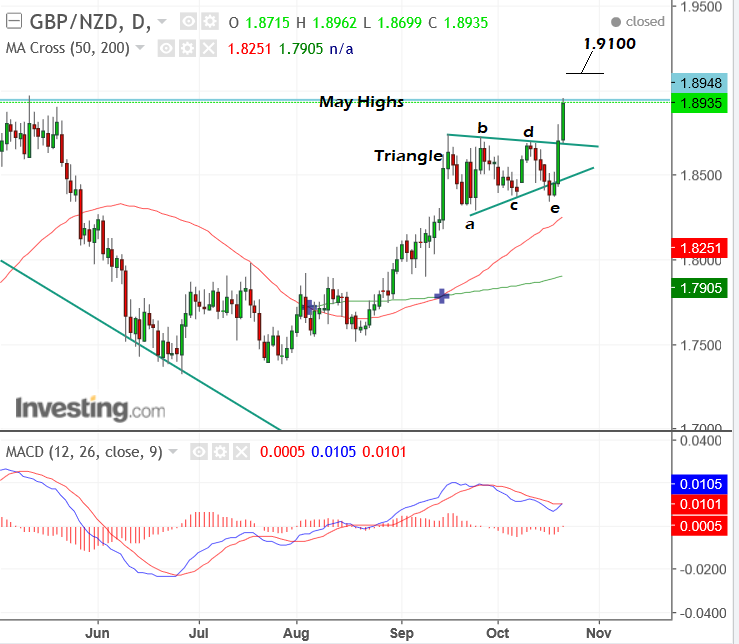 It has now reached the May highs and our upside target calculated from the triangle at 1.8950.

Whilst the trend is still very bullish and there is no evidence it has finished, triangles usually precede the final move in a trend, and therefore there is a chance the current breakout move is the last move in the current short-term uptrend.

In addition, we see the May highs as a key resistance level, which could very well repel the exchange rate due to high numbers of sellers entering the market at that level in anticipation of a pull-back.

Whilst a clear break above the May highs, confirmed perhaps by a move above the 1.9055 level (a key high from July 2016) would be a very bullish sign, and probably lead to a move up to 1.9100 we are a little reluctant to continue making bullish forecasts given our knowledge of triangles and the fact that they often occur late in trends.

Data, and Events that Could Move the New Zealand Dollar

The New Zealand Dollar lost lots of ground in the previous week following the news that the next government will be made up of a Labour-New Zealand First coalition.

This was the most negative of all the possible outcomes for the Kiwi, due to their anti-immigration and central bank reformist policies.

"The RBNZ will add an employment mandate similar to the Fed, immigration will be cut back and the government will renegotiate elements of the Trans-Pacific Partnership to increase restrictions on foreign home purchases," says Kathy Lien, Managing Director at BK Asset Management.

"With only the trade balance on tap, NZD may spend the week with a political hangover," says Lien, forecasting more weakness for the Kiwi in the week ahead.

On the hard data front, the Balance of Trade for September is released at 22.45 on Wednesday, October 25.

"September is a soft month for exports, so we pencil in scant improvement on the weak August print, while imports are expected to be strong as energy prices surged (more so than consensus). We look for a -$NZ1.3b deficit. This report also gives guidance for Q3 trade estimates, where we look for the current account deficit to remain at around -2.8% of GDP," says a note from TD Securities in a note covering economic events to watch in the coming week.

Data and Events that Could Move the Euro

The main event for the Eurozone in the week ahead is the meeting of the European Central Bank (ECB) to decide monetary policy, on Thursday at 12.45 BST.

Back in June the ECB said it would discuss a gradual reduction of its QE stimulus programme - otherwise known as "tapering" in the "fall".

Given this will be their last opportunity to announce their tapering programme before the onset of winter most analysts are taking them literally and expecting a detailed announcement.

Currently, the ECB buys 60bn of bonds per month as part of its programme, but most see this being reduced to 40bn for a period of 6 months.

Others expect a deeper cut to the monthly amount -  from 60bn down to 30 or 25bn but for a longer duration of 9-12 months,  such as Société Genérale's, Chief FX Strategist Kit Juckes, and TD Securities' Chief Macro Strategist Jacqui Douglas.

This, they argue, might be to keep the Euro anchored given recent misgivings that its recent rally might upset growth.

"Last month, the ECB suggested that not all decisions will be made at this month's meeting because the euro was a source of uncertainty but the currency is now trading at 1.18 instead of 1.20 so they should not be as worried," says BK Asset Management's Managing Director, Kathy Lien.

Lien thinks the ECB will opt for a 'dovish taper' by which she means, "cutting bond purchases by only 20B and extend it to September or beyond because they can always adjust it later and right now there's too much political uncertainty."

If she is right, she thinks the Euro will fall in line with most analysts; if wrong and the "ECB marries a more aggressive reduction with hawkish comments from Draghi, EUR/USD will hit 1.20 easily."

On the hard data front, the main release for the Euro will be PMI data on Tuesday at 10.00 BST.

Both Manufacturing and Services PMI's are expected to slip in October, with the former expected to come out at 57.8 from 58.1 and the later to come down to 58.7 from 58.8.

Nevertheless, despite expecting them to fall, IHS Markit who compile the data, view PMI's as broadly falling in line with the steady uptrend in regional growth.

"Both the degree to which output is rising and the extent to which price pressures have intensified are consistent with the ECB starting to rein in its stimulus," says Aw.

"The flash October PMI data will, therefore, play an essential role in gauging the health of the economy as we approach the end of the year, and thereby provide further insights on future monetary policy," added the economist.