The New Zealand Dollar fell but then recovered posture at the start of the new week following the resignation of New Zealand's Prime Minister Key.

GBP/NZD has slid at the start of the new week having amidst some broad-based selling of the Pound.

It was on the New Zealand Dollar side of the pair where the action was to be found however as markets were greeted by the unexpected announcement that Prime Minister John Key had called time on his tenure at the top.

Key will step down for family reasons, citing the desire to spend more time with his wife.

The NZ Dollar took a knock on the surprise but soon regained composure.

The odds-on favourite to succeed Key at a meeting of National party MPs on 12 December is finance minister Bill English, following his anointing by Key in his announcement, though he has yet to formally put himself forward.

The resignation allows the National party to consolidate behind a new candidate ahead of 2017's elections.

Markets therefore appear to like the stability Key's move allows over the longer-term; if this had come closer to the elections then the continuity that the National party represents could be jeoparised.

Despite the NZ Dollar trading higher, fading chances of the Bank of England (BOE) easing monetary policy combined with soft-Brexit talk mean the Pound has gekd the upper hand of late.

By contrast, the outlook for the New Zealand economy, from a macroeconomic point of view, is not as supportive as it was through the majority of 2016.

The cooling housing market may also put pressure on the domestic economy.

The GBP/NZD pair is still consolidating in an extended range between 1.79 and 1.73.

The range looks like the ‘B’ wave of an ABC correction, which suggests wave C has not yet unfolded (see below).

Wave C is probably in the process of unfolding higher and we expect it to push up to a target at around the 1.8100 mark.

The MACD indicator is above the zero line, indicating the pair is probably in an uptrend. 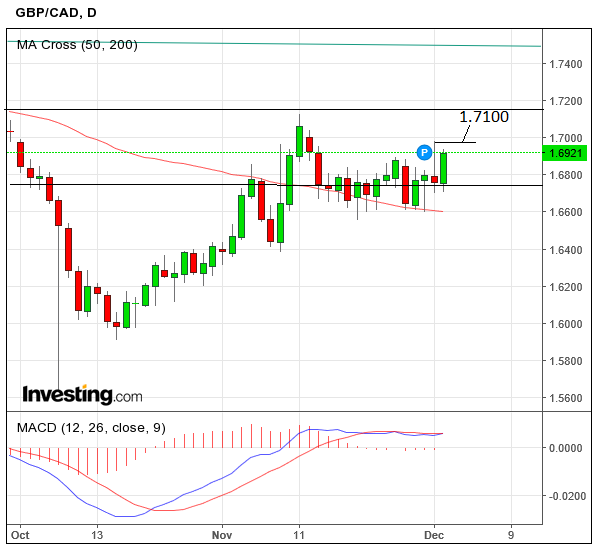 Data For the New Zealand Dollar

It is a quiet week for the New Zealand Dollar from a data perspective with the only release of any not Electronic Card Retail Sales for (mom) in November.

Data for the Pound This Week

A major release for the pound will be Services PMI for November on Monday, December 5 at 9.30 (GMT).

On Wednesday, December 7 at 9.30, there is the release of October Manufacturing Production.

Finally, on Friday, December 9 at 9.30, the Trade Balance for October is Released.