The Pound to New Zealand Dollar exchange rate recovery of early October has given way to a corrective setback that deepened in midweek trade due to a strong performance from the Kiwi and ahead of a Bank of England (BoE) policy decision that will either make or break the rebound for Sterling.

New Zealand's Dollar rose against all G20 counterparts while pushing Sterling to multi-week lows on Wednesday as economists looked again at assumptions about the outlook for the Reserve Bank of New Zealand (RBNZ) cash rate.

"While slowing global and domestic growth should reduce some of the demand-side pressures on the job market, weak migration should keep the supply of workers constrained and ensure that difficulty finding workers remains a persistent issue. That’s a recipe for wage inflation to remain elevated and keep concerns about a wage-price spiral at the forefront of the RBNZ’s mind," says Nathaniel Keall, an economist at ASB Bank.

"All-up, we expect the Bank to deliver a 75bps hike at this month’s meeting and an OCR peak of 5.25% in early-2023, though there’s the risk some of those latter hikes may not need to be delivered as the OCR gets further and further away from neutral levels. Beyond that, we need to see some relaxation in labour market conditions before the cash rate can move lower again," he adds.

Some forecasts for the Kiwi cash rate were lifted after Statistics New Zealand announced a sharp third-quarter increase in average hourly earnings and overall worker pay that will inevitably be perceived by the RBNZ as something that will risk keeping inflation above the 2% target for longer. 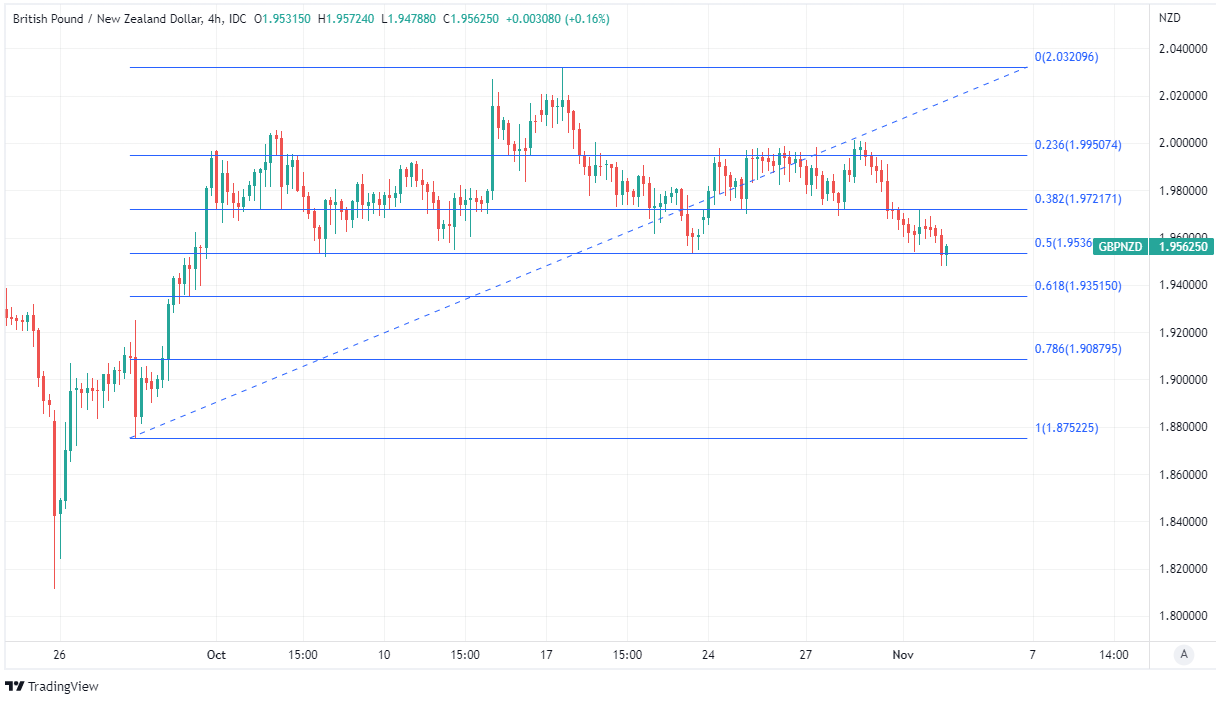 Hourly earnings rose by 7.2% for the 12 months to the end of September, which was a record increase that matched the third quarter inflation rate of 7.2% and exceeded the core inflation rate of 6.2%, likely leaving many Kiwi pay packets more or less unchanged for the last year.

This is in an environment where the RBNZ is hoping to eat into incomes using its cash rate to sap demand from within the economy and help drive inflation back into the one-to-three percent target band, hence Wednesday's upgrades to forecasts for the cash rate.

"The labour market has only continued to tighten in Q3 (from already remarkable levels in Q2), and is now a key source of domestic inflation. Today’s data reinforce our expectation for a 75bp OCR hike (to 4.25%) at the RBNZ’s November meeting," says Finn Robinson, an economist at ANZ.

"With employment and hourly earnings growth coming in hotter than the RBNZ expected, the data also tilt the odds further towards our forecast of a 75bp hike in February (to 5.0%)," Robinson also said on Wednesday.

Both ASB and ANZ now forecast the RBNZ to raise its cash rate by 0.75% on November 23, which would be its largest interest rate rise to date, ahead of additional increases in the new year that would have potentially favourable implications for Kiwi interest rate differentials with the Dollar and Sterling. 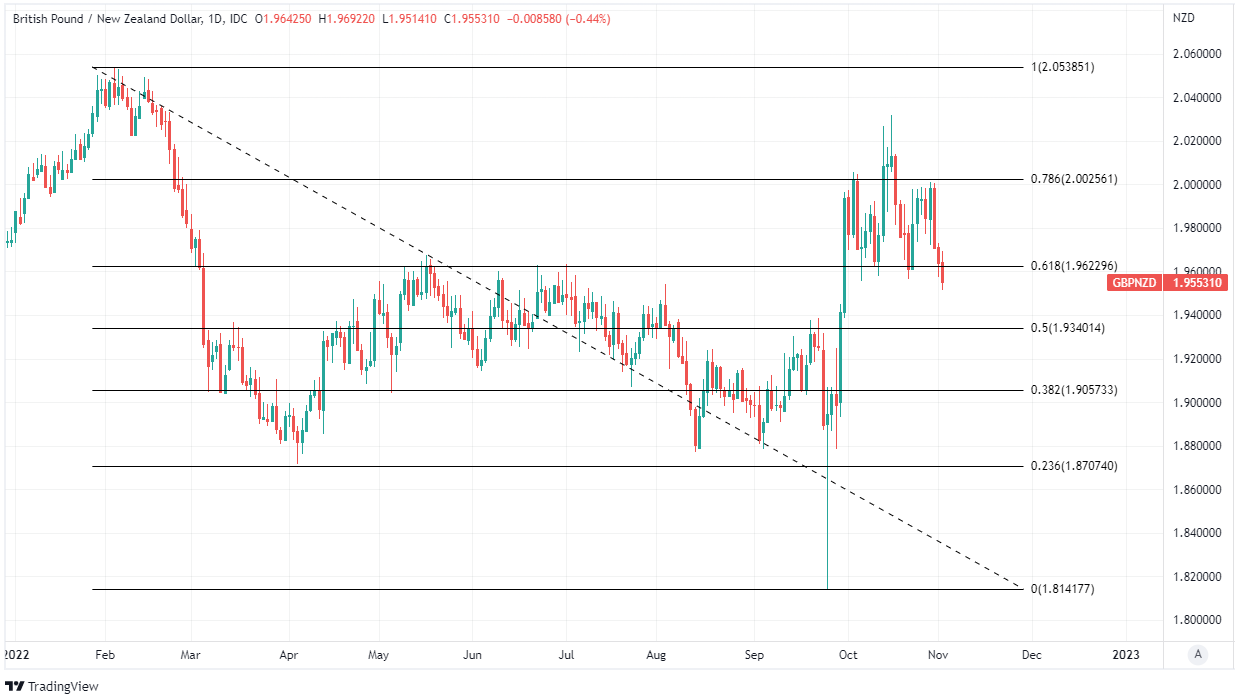 Much about the interest rate differential and outlook for GBP/NZD does also depend, however, on Thursday's policy decision from the BoE and the extent to which it's minded to continue lifting Bank Rate in the face of a slowing economy and the frugal fiscal policy of the newly composed government in London.

"We continue to highlight the risk of a dovish surprise (50bp hike)," says Francesco Pesole, an FX strategist at ING.

"A USD-positive FOMC and a GBP-negative Bank of England means cable could test 1.1300 by the of the week," Pesole said in a Wednesday warning that would have bearish implications for GBP/NZD if realised.

The BoE warned in September of a forceful response if it appeared that former Prime Minister Liz Truss' budget would provide a significant boost to the economy but since then HM Treasury has about-turned and is now looking to cut spending and raise taxes in pursuit of a budget surplus.

None of this has stopped many economists and the markets from looking for Bank Rate to rise by three quarters of a percentage point to 3% on Thursday.

That would also be the BoE's largest increase so far but the risk is of a market disappointment that deepens the corrective setback underway in GBP/NZD. 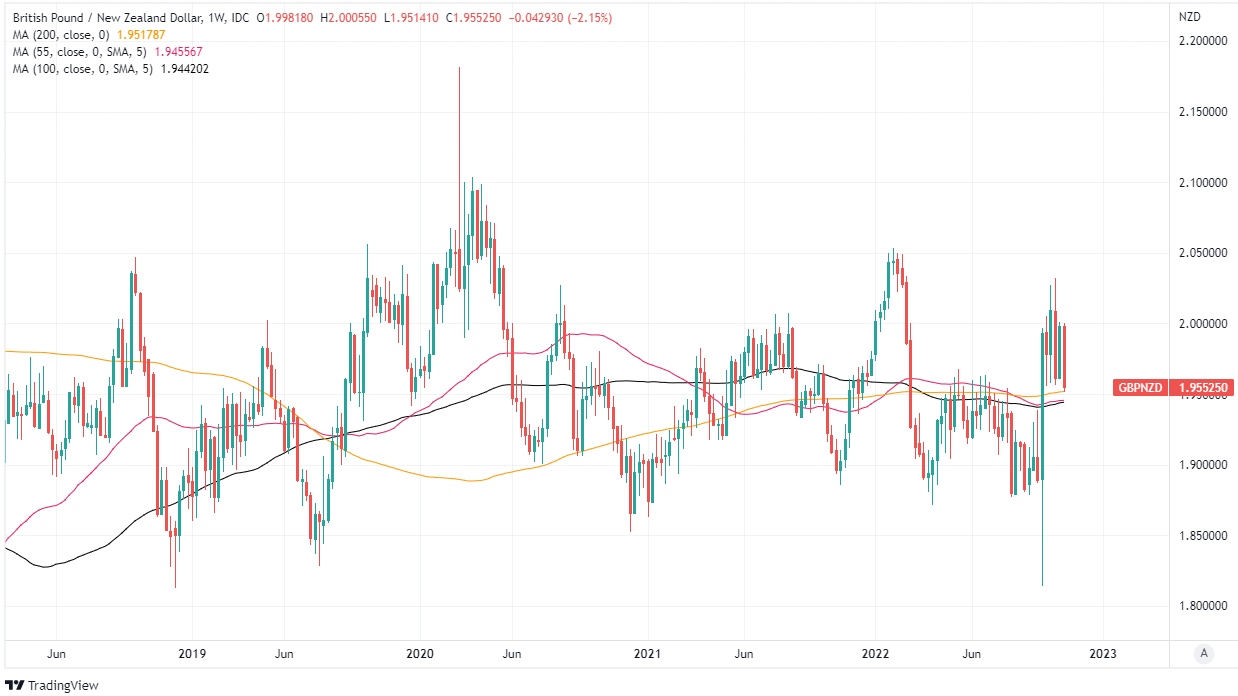 GBP/NZD tends to closely reflect the relative performance of the Kiwi and Sterling when each currency is measured against the U.S. Dollar and would risk falling below the 1.95 handle on Thursday if ING's Pesole is right about how GBP/USD would respond to a smaller 0.5% increase in Bank Rate.

This would be likely even if the Kiwi also falls against the U.S. Dollar along the way for reasons relating to Wednesday's Federal Reserve policy decision.

"The market is pricing in high odds of a 75bp hike and is 50:50 on whether the 15 Dec MPC will produce a 50bp or 75bp move," writes Shahab Jalinoos, head of FX strategy at Credit Suisse, in a Wednesday market commentary.

"Before the “Trussonomics” fiasco, the BoE consistently disappointed market expectations for hikes by flagging the longer-term disinflation a deep recession could produce. If it reverts to type with only a 50bp rate hike, GBP has a long way to fall, with a move to 1.1200 possible on the day," he adds.

GBP/NZD would fall even further and potentially below the 1.93 handle this week if Credit Suisse's Jalinoos is right about the main Sterling exchange rate, GBP/USD, being likely to fall back to 1.12 or below in any scenario where the BoE merely continues to raise Bank Rate at September's pace.