The Pound to New Zealand Dollar exchange rate remains close to its early August lows but has been finding support around 1.8950 in recent trading and could be likely to stabilise above this level for as long as risk aversion continues to characterise the mood in global markets.

New Zealand's Dollar softened against many currencies during the opening half of the week as the U.S. Dollar extended its late August rally and risky assets built further on the losses sustained following last Friday's keynote address from Federal Reserve (Fed) Jerome Powell at this year's Jackson Hole Symposium.

"A fall to around 0.6000 over the next few weeks would not surprise," Speizer and colleagues said of NZD/USD on Wednesday.

The Kiwi's latest declines  have broadly matched those seen by Sterling when each currency is measured against the U.S. Dollar, which is what is reflected in the stabilisation of GBP/NZD near to August lows and some of its softest levels for more than two years. 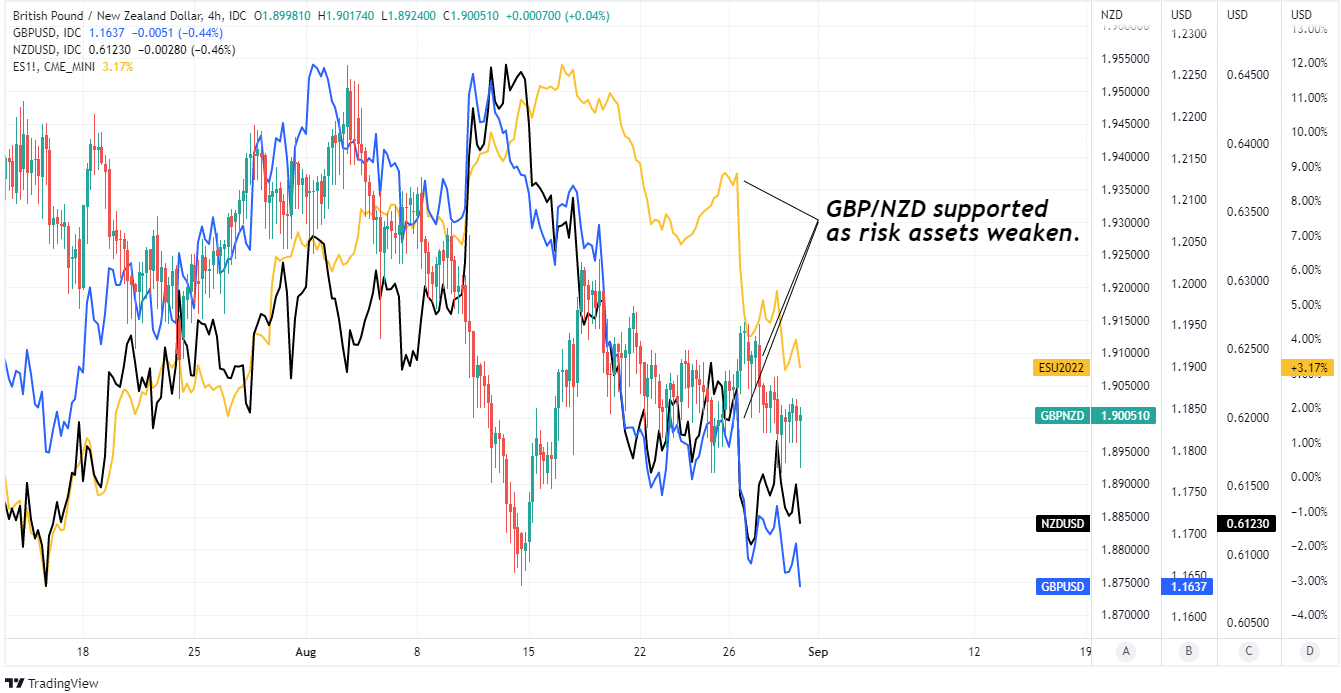 The Pound to New Zealand Dollar rate often demonstrates a negative correlation with exchange rates like GBP/USD and NZD/USD so may be likely to remain relatively well supported near or above current levels for as long the U.S. Dollar remains on its front foot.

"The NY Fed’s John Williams said the Fed is “quite a ways from” having reduced demand pressures enough to get inflation down, noting real interest rates need to get into positive territory," says Nathaniel Keall, an economist at ASB Bank.

"The message: markets may be getting ahead of themselves by beginning to price cuts from mid next year. Shifts in Treasury yields have been fairly modest despite those comments, given Powell and Kashkari have already been hammering the message over recent days," Keall also said on Wednesday.

Fed policy has lifted U.S. bond yields and the U.S. Dollar strongly in recent weeks, inspiring weakness in risky assets and supporting GBP/NZD, although there is a risk that this will be only a temporary period of respite for the Pound. 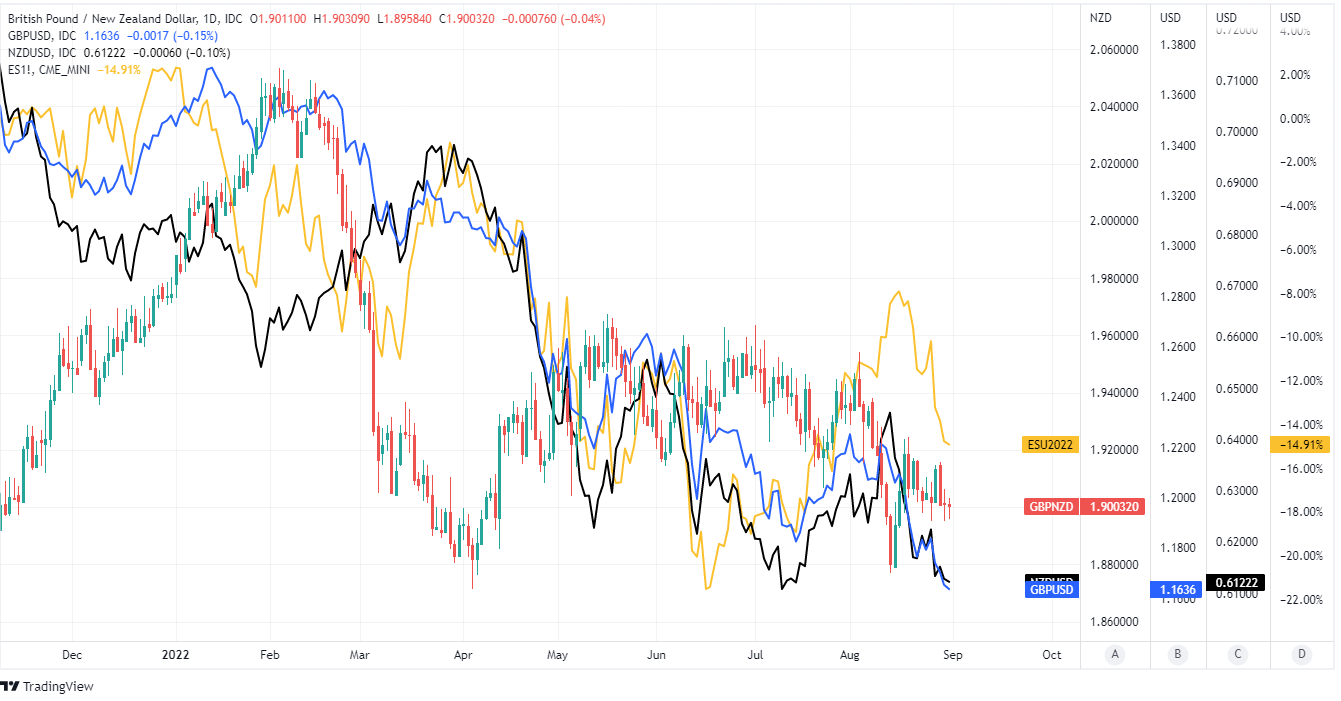 GBP/NZD would likely come under pressure anew if the U.S. Dollar's advance stalls or if risky assets stabilise because the Kiwi often tends to benefit more from those things more than Sterling.

However, the divergent fortunes of the UK and New Zealand economies may be likely to also remain a weight on Sterling up ahead.

"The current narrative in FX markets seems to be that the USD will be the best of a bad bunch if global growth does slow, and additionally, that if the RBNZ was an early started with rate hikes, NZ could be at risk of entering a recession sooner," says David Croy, a strategist at ANZ.

"That logic is hard to refute, and we remain pretty neutral on the Kiwi here now that it’s close to our 2yr-ahead estimate of fair value," Croy wrote in a recent research briefing.

New Zealand's economy surprised many around the markets when contracting during the first quarter of the year and some more recent data, including second quarter retail sales figures released last week, has suggested that the economy may have remained soft throughout the year.

However, Reserve Bank of New Zealand Governor Adrian Orr gave an upbeat assessment of the outlook when telling CNBC from the Jackson Hole Symposium last week that the Kiwi economy likely regained some momentum during the recent quarter.

Governor Orr said that local inflation rates are likely in the process of peaking and that there is unlikely to be any technical recession in New Zealand this year even after a "couple more" increases that are widely expected to lift the cash rate to 4% or more by year-end.

This is in contrast to the outlook for a UK economy that is tipped by the Bank of England to enter recession by year-end and just as inflation tops 13%, which would be almost twice the rate of New Zealand inflation.

The risk is now that Kiwi interest rates rise further and to higher levels than in the UK while inflation comes down during the months ahead, burnishing the Kiwi's relative appeal to investors and prompting further declines for the Pound.

"New Zealand’s terms of trade for Q2 2022 will also be released (Friday). A strong terms of trade may help to lessen the downward pressure on NZD from the narrowing NZ-US interest rate differential and the worsening global economic outlook," says Joseph Capurso, head of international economics at Commonwealth Bank of Australia. 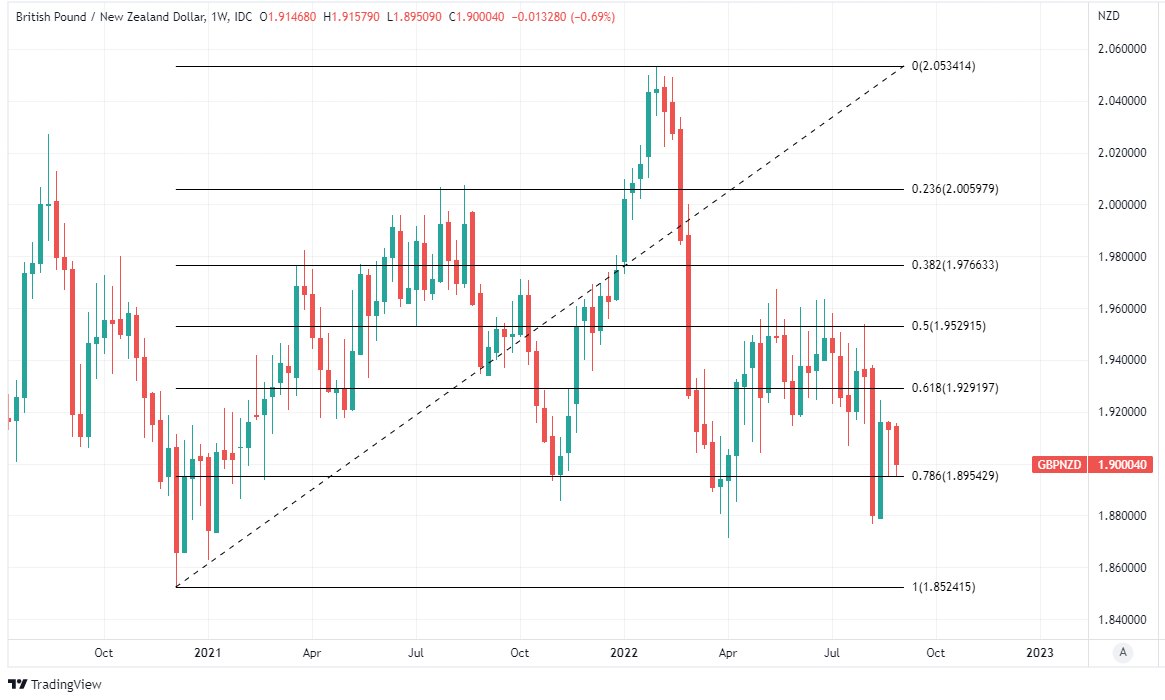