The RBNZ is expected by markets to raise interest rates a further 50 basis points to 3.0%, but it is the tone of the guidance that comes out of the Bank that will likely spark any sizeable moves in the currency.

"Importantly, we would not be surprised to see slightly more dovish guidance from the RBNZ," says Kamakshya Trivedi, Co-head of Global Foreign Exchange Research at Goldman Sachs.

Goldman Sachs says the meeting is likely to be one of the key events for foreign exchange markets this week, and the outcome is likely to be in line with their bearish NZ Dollar thesis.

Their economists remain more dovish on the path for future RBNZ rate hikes (i.e. they expect less) than the market currently is. 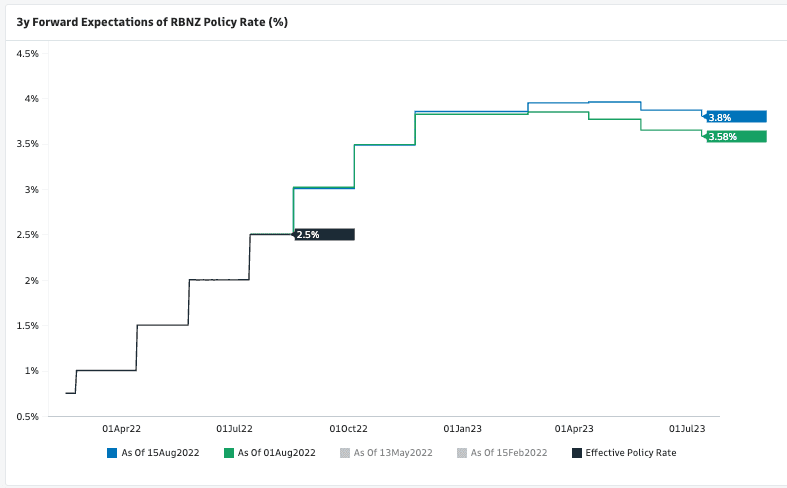 "NZD has strengthened since the July meeting, which likely has dampened any concerns around additional inflationary pressures through a weaker currency. Thus, if the RBNZ decides to follow the Fed in widening its criteria to focus on the downside risks to growth as well as the upside risks to inflation, we could see more idiosyncratic weakness in NZD going forward," says Trivedi.

He adds that such an outcome would be consistent with the broad performance of other currencies following recent major central bank meetings.

The Pound's decline in the wake of the Bank of England's August policy update provides an example: Sterling exchange rates fell after the Bank hiked 50 basis points, largely because of the dire forecasts that were presented.

The bank said it expects recession to hit the UK by year-end, all else being equal.

This is a part of a theme whereby central banks hike aggressively into a slowdown; currency analysts do not see this as necessarily supportive of currencies.

Dominic Bunning, Head of European FX Research at HSBC, says he is also looking for this kind of reaction.

"A recurring theme for many central banks in recent months – tightening somewhat aggressively while laying out a less hawkish forward-looking message. We saw the negative impact of this on the AUD, GBP and even USD after recent policy decisions. The NZD and NOK are likely to be in the same boat this week, in our view," says Bunning.

HSBC economists say a rise to 3.0% means New Zealand policy rate will be above the RBNZ's estimate of 'neutral', so it may be time for guidance to turn less hawkish as the economy starts to feel the effects of earlier tightening.

"The risks appear skewed to the downside in terms of forward guidance relative to what the market has priced in," says Bunning.

New Zealand CPI inflation hit a 32-year high of 7.3% year-on-year in the second quarter of 2022, over and above the official 1-2% target range, confirming a need for the Bank to maintain a policy of rate hikes.

But forward-looking gauges show inflation is near a peak: the most recent monetary conditions survey showed one-year inflation expectations easing to 4.86% in the third quarter from 4.88% a quarter ago. 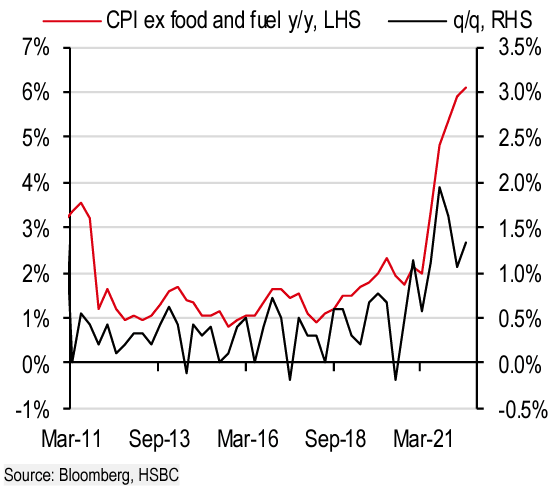 Above: HSBC says there may be signs of moderating inflation in New Zealand

Two-year expectations fell to 3.07% from 3.29%, suggesting a re-anchoring of inflation expectations.

"Although inflation has stayed elevated or even accelerated, the activity data pulse has slowed to a near standstill," says Bunning.

"Will the RBNZ be able to deliver a more hawkish message or set of forecasts than it already has done? We think this is unlikely given the central bank expected rates to get to 4% over the next year," he adds.