The New Zealand Dollar starts the new week on a soft footing as it follows its Australian peer lower in response to a soft set of Chinese economic data, although the domestic focus for the currency is Wednesday's Reserve Bank of New Zealand (RBNZ) interest rate hike.

The Pound has rallied by nearly a percent against the Kiwi on Monday following the release of data from China - New Zealand's most important trading partner - that showed industrial production grew 3.8% year-on-year in July, underwhelming against the 4.6% expected by markets.

Retail sales meanwhile expanded 2.7% year-on-year, just half of the 5.0% the market was looking for, confirming the impact of China's unrelenting zero-Covid policy remains a burden on domestic activity.

In response, the People's Bank of China (PBoC) surprised analysts by cutting both one-year and seven-day lending rates by 10 basis points in response.

"The week starts with focus on China's 10bp cut in its one-year Medium-Term Lending Facility (MLF). Rather than rallying on the prospect of stimulus, commodity currencies have softened on the view that China may not be the engine of world growth for some time," says Chris Turner, Global Head of Markets and Regional Head of Research for UK & CEE at ING Bank.

The New Zealand Dollar is considered a commodity currency given that the majority of its exports end up in China, while the world's number-two economy remains a key growth engine for the Asia-Pacific region more generally.

The Pound to New Zealand Dollar exchange rate (GBP/NZD) has risen by three quarters of a percent to quote at 1.8934 in response to developments, leaving exchange rate quotations on bank accounts for Kiwi Dollar payments at around 1.8405.

Independent payment specialists are meanwhile quoting at around 1.8878.

From a technical perspective, the Monday rally suggests some support is in play at around the 1.8788 area (Friday's low), which corresponds with similar levels that offered support back in March-April when the post-Russian invasion sell-off in the pair stabilised.

The low was at 1.8714 and this would appear to be the last major level of support for the pair; a more protracted decline could ultimately ensue if it is broken. 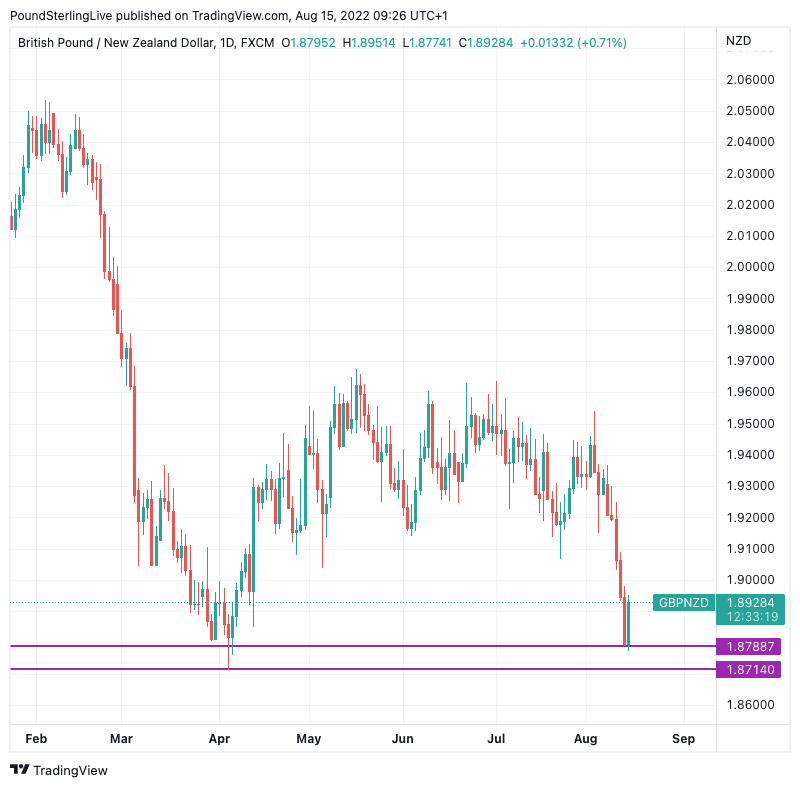 Above: GBP/NZD at daily intervals, giving a rough idea of where support lies. (SET your FX rate alert here).

Whether the GBP/NZD finds itself holding above support over coming days could well depend on the outcome of the August 17 RBNZ policy update.

The Bank is expected to hike by another 50 basis points, taking the OCR to 3.0%.

After the 50bps hike on 13 July, CPI inflation hit a 32-year high of 7.3% year-on-year in the second quarter of 2022, over and above the official 1-2% target range, confirming a need for the Bank to maintain a policy of rate hikes.

However, the RBNZ might sound less 'hawkish' than in previous updates as the monetary conditions survey showed one-year inflation expectations easing to 4.86% in the third quarter from 4.88% a quarter ago.

Two-year expectations fell to 3.07% from 3.29%, suggesting a re-anchoring of inflation expectations.

The tone of the RBNZ with regards to the outlook will arguably be the most important determinant of how the NZD trades on the day.

New Zealand fuel prices have fallen in line with falling global oil prices and after the Treasury reduced fuel excise duty, road user charges, and public transport fares, extending the cuts until the end of January 2023.

"With the OCR above the estimated 2% neutral rate, RBNZ may slow the pace of hikes to 25 bps at each of the remaining two meetings of the year to 3.50%, near the 2Y and 10Y yields," says Taimur Baig Chief Economist at DBS Bank.

Should market expectations for future NZD interest rate hikes cool, the NZ Dollar could cool too, offering GBP/NZD some respite at a time of increasing downside pressure.

"The NZD is more likely to weaken in the short term," says Lemon Zhang, an analyst at Barclays Bank in Singapore, "any indication of a slower pace of hikes ahead could weigh on the NZD."

Barclays expects the RBNZ to deliver its fourth consecutive 50bp hike and maintain its approach of "briskly" lifting the OCR, but expects the Bank to signal a slower pace of increases hereafter, as commodity prices come off, and headwinds to growth increase amid already tight financial conditions.