The Pound to New Zealand Dollar exchange rate has drawn bids in response to momentary slippage beneath the 1.93 handle thus far in the new week but could find itself stifled by a resilient Kiwi Dollar upon any advance toward the round number of 1.95 in the days ahead.

Pound Sterling ceded ground to the New Zealand Dollar on Monday as the Kiwi currency benefited from an extended rebound by China’s Renminbi as well as an indecisive market for U.S. Dollar exchange rates before GBP/NZD’s decline was arrested beneath 1.93 in Tuesday’s Asia session.

“Lockdowns in China are starting to ease as COVID-19 cases fall. This will help boost economic activity, not only in China, but also in the countries which rely on China for trade. China is expected to release additional fuel into the global market to help clear its stockpiles. Beijing has also announced measures to try to stimulate economic activity through additional government spending,” says David Croy, a strategist at ANZ.

“The Kiwi is a touch stronger this morning, but it looks more like a currency at the upper end of trading ranges than a currency on the verge of a major breakout. Time will tell, and it was the USD leg of the equation that did the moving amid thin liquidity (US markets were closed for Memorial Day), but the NZD has gone sideways in TWI terms, and is slipping against the AUD,” Croy said in a note to clients around Tuesday’s Asia open. 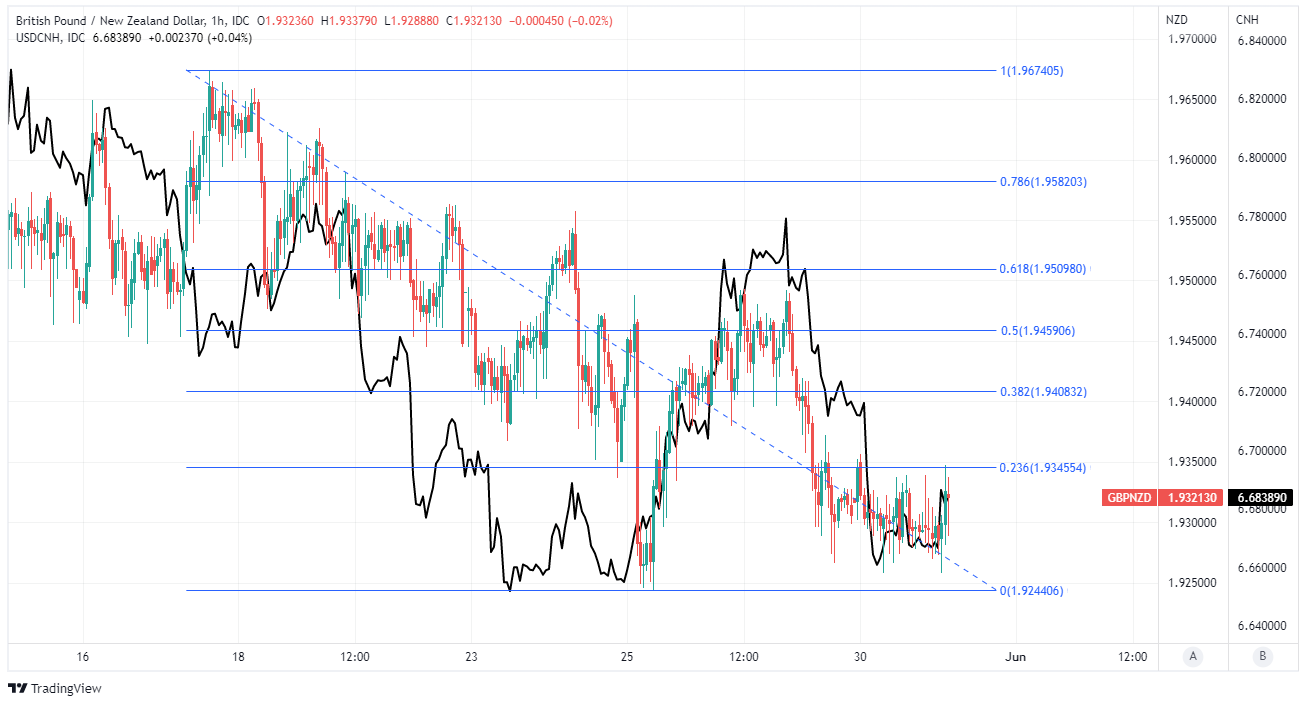 Above: GBP/NZD at hourly intervals with Fibonacci retracements of May 19 fall indicating possible technical resistances for Sterling and support for the Kiwi and shown alongside USD/CNH. Click image for more detailed inspection.

The reopening in Shanghai and other parts of China is accompanied by local and national government efforts to stabilise foreign trade and investment, all with a view to striking a balance between coronavirus control objectives and the needs of the economy, which is a positive development for the world’s second largest economy as well as trade partners economies.

But the rally in risky currencies and earlier decline in the Pound to New Zealand Dollar rate was halted in Asia on Tuesday European Union members “agreed in principle on the sixth sanctions package” that will “cut around 90% of oil imports from Russia to the EU by the end of the year.”

The announcement was followed by a rally in oil prices that weighed on currencies of importing countries and prompted broad gains for the U.S. Dollar, in the process lifting the Pound to New Zealand Dollar rate from its Monday lows beneath the 1.93 handle.

“Unless the EU is going to stop using oil --which is not the case-- it means supply-chain reshuffling as (discounted) Russian oil goes off somewhere else, and the pricier oil they had been buying heads to the EU at higher logistical cost. So that could hurt Russia – and the EU,” explains Michael Every, a global strategist at Rabobank.

I am glad that tonight leaders agreed in principle on the sixth sanctions package. This is an important step forward.

We also agreed to work on a mechanism to provide Ukraine with a new, exceptional macro-financial assistance package of up to €9 billion. https://t.co/La3bZl6JNp

Rabobank’s Every has long warned that many economies will increasingly face acute, inflationary shortages in supply of the “building blocks of a modern economy,” and not limited to simply just this kind.

He argues these could only be resolved by a mass mobilisation and repurposing of resources aimed at developing safe and secure international supply chains.

He said on Tuesday that this should "involve on-, near-, or friend-shoring supply chains, industrial policy, a massive step up in US involvement in (maritime) logistics, and/or capital controls."

"If not, it’s not much of a plan for inflation,” he added. 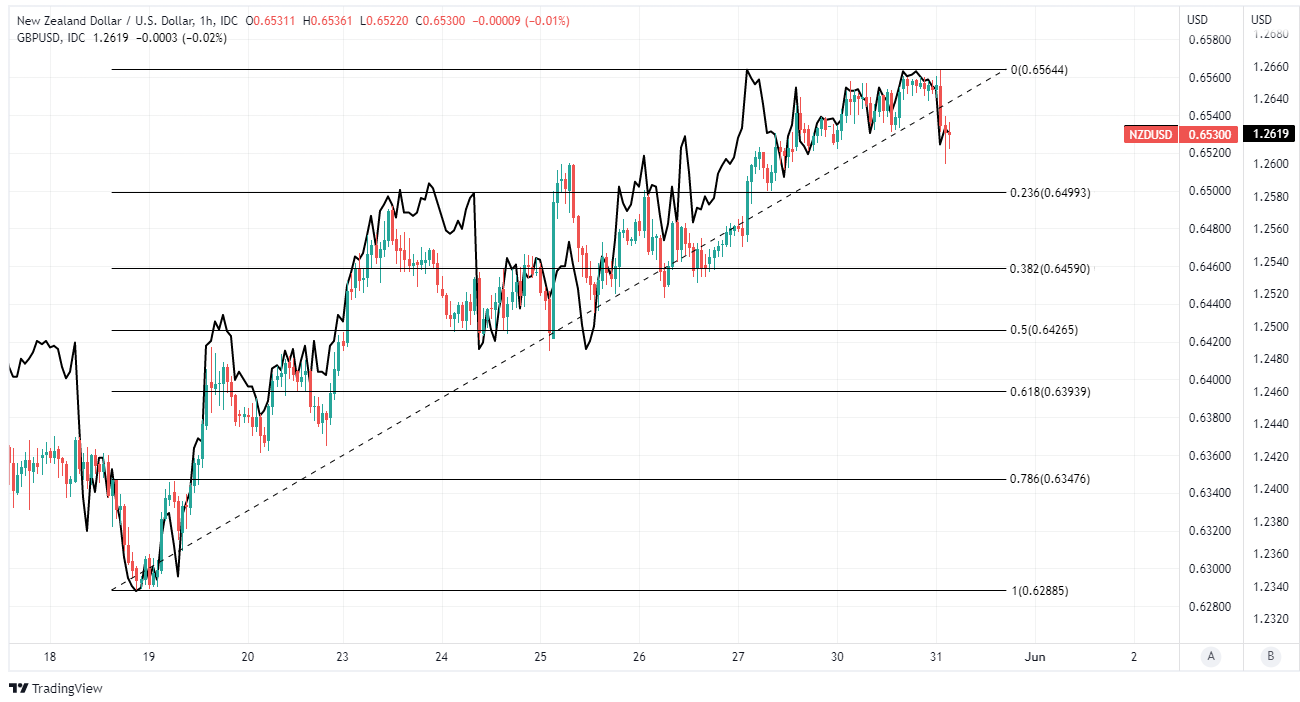 Above: NZD/USD rate at hourly intervals alongside the GBP/USD and with Fibonacci retracements of May 19 rally indicating possible technical supports for the Kiwi and resistances for the Dollar. Click image for more detailed inspection.

The Pound to New Zealand Dollar exchange rate could recover above 1.94 but struggle on the approach of 1.95 if the rally in oil prices and tentative rebound by the U.S. Dollar partially pares back the moves whipped up by the earliest suggestions of Shanghai’s reopening entering the pipeline.

This could potentially see the main Kiwi exchange rate NZD/USD and its Sterling counterpart, GBP/USD, ceding the 0.65 and 1.26 levels respectively with implications for a GBP/NZD pair that often tends to benefit when U.S. Dollar exchange rates are rising.

“Today, pay attention to the meeting between US President Joe Biden and Fed Chair Jerome Powell. The Oval Office agrees with the Fed’s assessment that fighting inflation is the top priority and will support the Fed’s independence and judgment in bringing down inflation. Investors are looking for optimism that US inflation has peaked and that the US economy will avert recession,” says Philip Wee, an FX strategist at DBS Group Research.

U.S. Dollar exchange rates including NZD/USD and GBP/USD, which are each key influences on GBP/NZD, could be sensitive on Tuesday to anything emerging from the White House following a planned meeting with Federal Reserve (Fed) Chairman Jerome Powell. 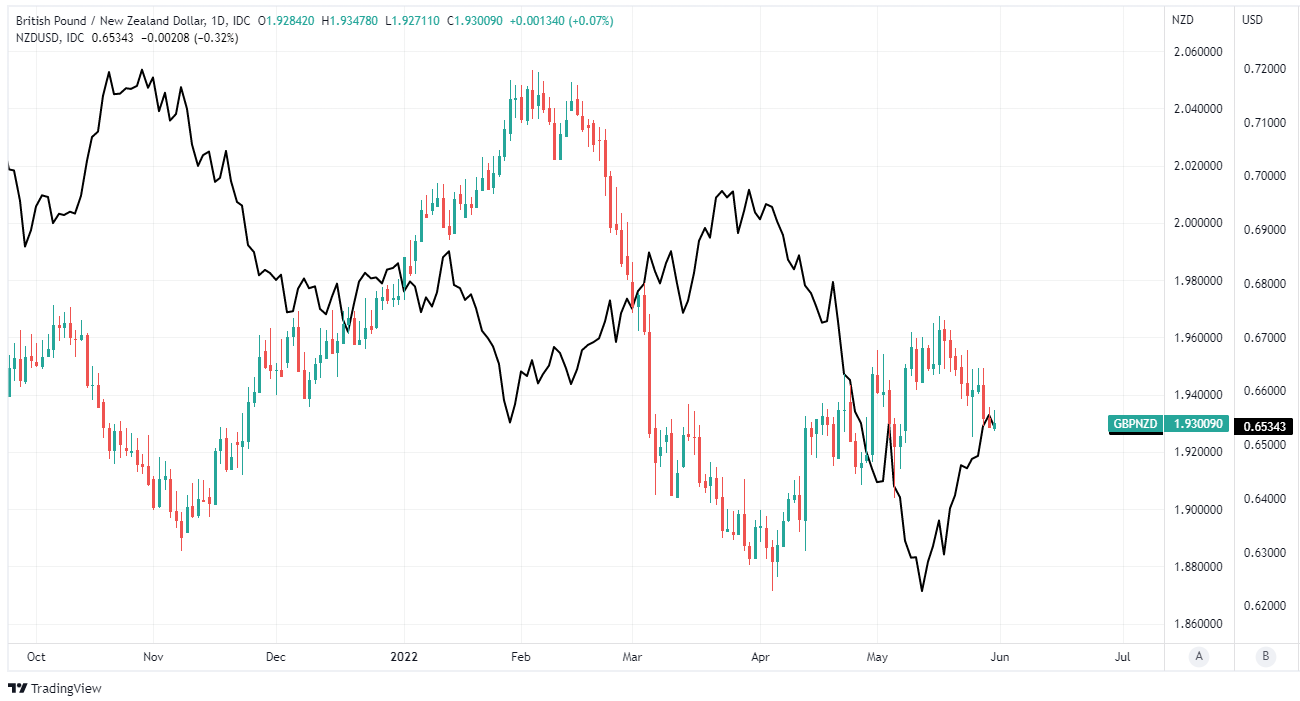 The above is important because the rally in NZD/USD and May’s trend lower in GBP/NZD has recently been buttressed by a softening U.S. Dollar reflecting data that economists view as being suggestive of ebbing growth momentum that could have implications for the inflation outlook.

GBP/NZD could be supported and NZD/USD stifled by any monetary policy relevant remarks that lift the U.S. Dollar although the upside for Sterling and downside for the Kiwi is potentially limited by the increasingly hawkish monetary policy stance of the Reserve Bank of New Zealand (RBNZ).

“Markets have again jumped above the RBNZ, although only moderately so. The RBNZ forecasts a peak OCR of 4.0%, while markets price 4.3%. We expect this state to persist until there is evidence that inflationary pressures are starting to subside,” says Imre Speizer, head of NZ strategy at Westpac.

“That said, markets are now reluctant to price too much beyond 2023, given the track’s downward inflection from 2024. The result is a large hump in short-end rates and curve inversion beyond that. The RBNZ is increasingly concerned about the risk of higher inflation becoming embedded in people’s thinking and actions,” Speizer and colleagues said on Monday.