The Pound to New Zealand Dollar exchange rate could be at risk of slipping further in the direction of its November 2021 trough over the coming days due to an ongoing rally by the Kiwi currency.

New Zealand’s Dollar was the top performing major currency on Tuesday when it lifted the NZD/USD exchange rate back above 0.69 for the first time since November, weighing on GBP/NZD and other Kiwi-facing exchange rates along the way.

The New Zealand Dollar has been rallying since late in January while commodity-linked currencies more generally have outperformed since the Russian military began its ongoing invasion of Ukraine on February 24, which could impact the availability of Russian raw materials on global markets.

“We expect this source of support to persist for much of this year. Surging commodity prices have not been fully priced into the NZD, which is one reason for it trading well below fair value (around 0.74),” says Imre Speizer, head of NZ strategy at Westpac. 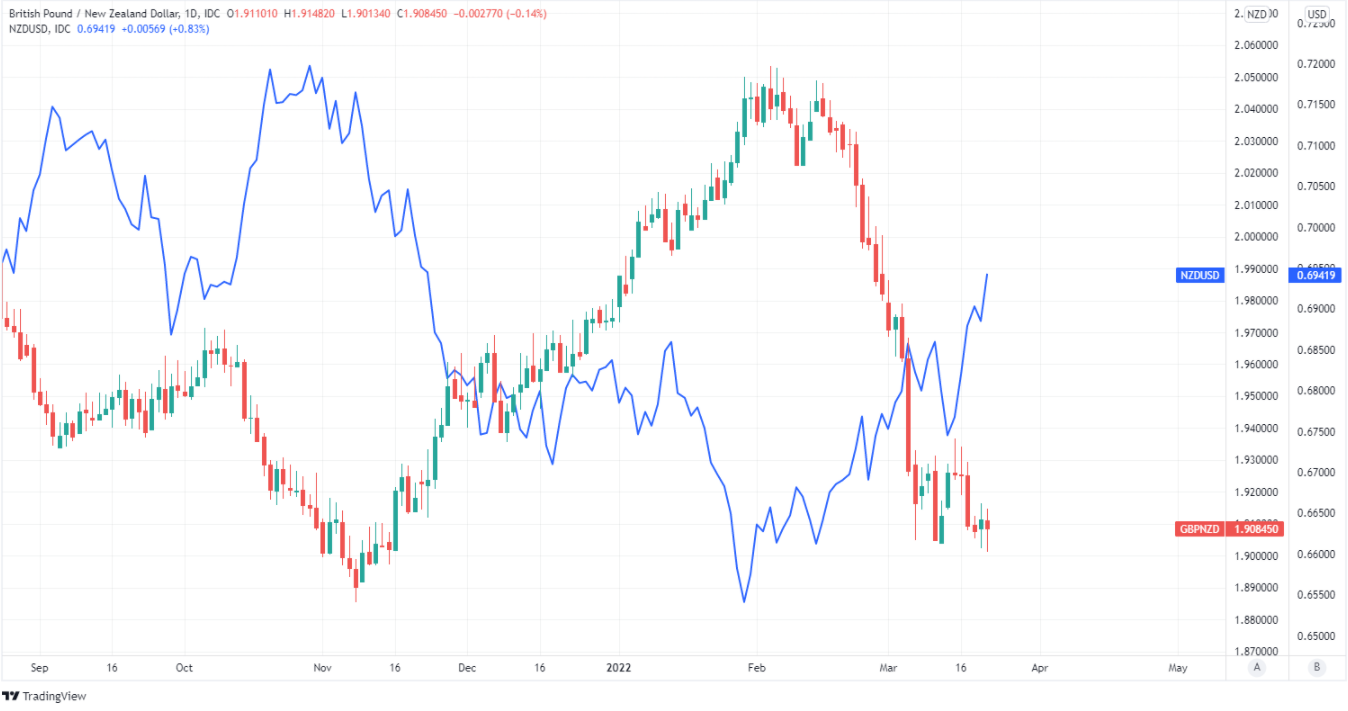 Commodity-linked currencies are notorious for what often appears to be an inconsistent relationship with commodity prices, although the latter have evidently provided an uplift to many currencies including the New Zealand Dollar during recent weeks.

One possible reason for the latter is that for many producer economies, the international response to the Russian invasion of Ukraine will create opportunities for investment in production and could lead to new trade relationships being forged.

Speizer and Westpac colleagues said on Monday there is scope for NZD/GBP to rise back toward 0.53 over the coming weeks and this implies that GBP/NZD could fall toward 1.8867, which would be close to Sterling’s November 2021 trough and near its lowest ebb since January 2021.

GBP/NZD would be likely to fall to around 1.8950 this week if the rally in NZD/USD continues in the direction of the 0.70 handle and in part because it tends to closely reflect the relative performance of Sterling and the Kiwi when each is measured against the U.S. Dollar.

Recent increases in commodity prices are an added boost for the Kiwi Dollar, which could also be in line to benefit in the months ahead of Reserve Bank of New Zealand interest rate policy after the RBNZ signalled in February that it could lift the Kiwi cash rate to 3% or more in the year or so ahead.

“Inflation expectations in New Zealand have risen aggressively over the past year –and there’s a real risk that recent price spikes could cause expectations to become unanchored from the RBNZ’s 2% target for CPI inflation –especially as Omicron exacerbates already stretched domestic supply chains,” says Sharon Zollner, chief economist at ANZ.

“In essence, inflation expectations are a form of self-fulfilling prophecy. If people think inflation is going to be strong in the future, then they will likely put up their prices or demand higher wages now, in anticipation. If enough people do this, inflation will rise and people may then revise up their expectations for inflation. You can see how such a feedback loop can quickly get out of hand,” Zollner and colleagues said in a Tuesday research note. 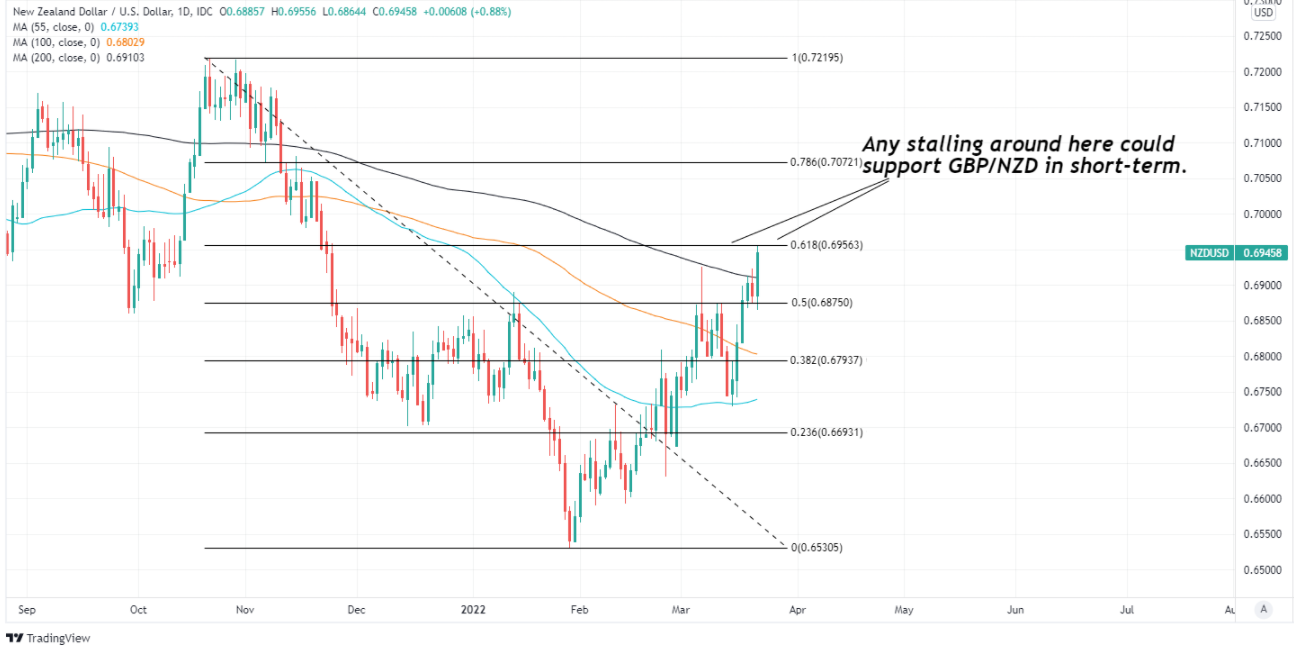 The NZD/USD rally is an added headwind for a GBP/NZD rate that was also weighted down last week when the Bank of England (BoE) indicated that economic damage done by runaway increases in oil and gas prices could potentially serve as a substitute for further increases in Bank Rate.

The BoE lifted Bank Rate back to the 0.75% it was at prior to the coronavirus crisis last week but financial markets have been wagering that multiple further increases would lift the cash rate to 2% or more this year and these expectations were called into question by language in Thursday’s statement.

“GBP has been outperforming in Europe. Its strength, despite last week's dovish hike by the BoE, is a reminder that continental Europe faces the same, if not worse pressure from the current energy shock,” says Chris Turner, global head of markets & regional head of research at ING.

“In focus over coming sessions is the UK Chancellor's spring statement (tomorrow). There is much press speculation over support measures such as a cut in fuel duties, increases in national insurance thresholds, and more generous corporate tax breaks to encourage investment. That the UK's fiscal position has some room to support the economy may provide a little more room for the Bank of England to hike,” Turner also said on Tuesday.

The remainder of the week is devoid of major appointments on the economic side for the Kiwi but will see several important reports published in the UK including February inflation figures on Wednesday and the latest budget statement later in the same session.