This is according to research that shows some currencies have a remarkably predictable ability to completely flip January's performance, particularly if the moves appear extreme.

Adam Cole, Chief Currency Strategist at RBC Capital has studied the performance of currencies in the months of January and February, going right back to 2000.

"January is prone to overshooting in crowded consensus trades that subsequently unwind," he says in a research note. 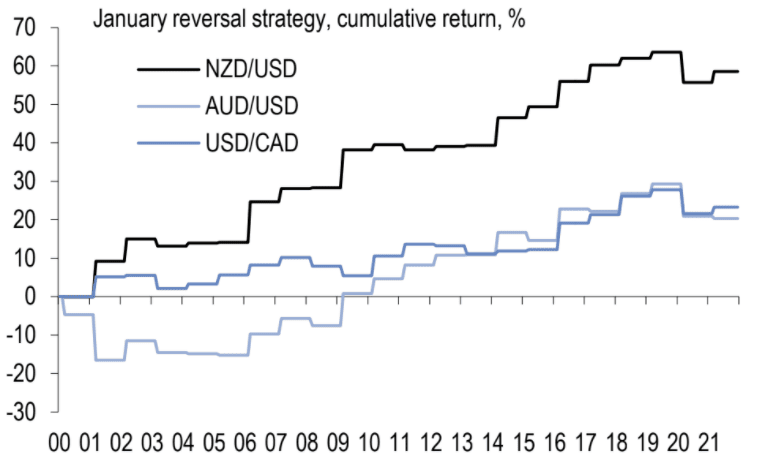 The New Zealand Dollar was the biggest loser in January 2020, falling against all its peers.

"It is hard to overstate just how badly NZD traded in January. After a 3.7% fall against USD, it was the worst performing currency within G10 and major EM. It is also difficult to explain why it traded so badly," says Cole.

Cole's research finds that for NZD/USD, almost all of the monthly move is "unexplained."

This is important in that it opens the door to seasonality as an explanation.

Indeed, Cole finds that some of the usual suspects - a combination of weaker equities and narrower rate spreads - accounted for just 0.5% of the 3.7% monthly fall.

"We argue ... that NZD (and AUD and CAD) has a strong tendency to overshoot (in both directions) in January and reverse in the remainder of Q1," says Cole.

If the findings are correct the New Zealand Dollar could be in for a February of gains against the likes of the Pound, Euro and U.S. Dollar.