The New Zealand Dollar is forecast to experience further near-term gains on a combination of fading U.S. Dollar strength and firming expectations for the Reserve Bank of New Zealand to begin raising interest rates, with a first potential hike coming as soon as October.

Although New Zealand might be experiencing restrictions to counter the spread of Covid-19 analysts say this is not enough to discourage the Reserve Bank of New Zealand (RBNZ) from pursuing higher interest rates.

With foreign exchange markets proving sensitive to interest rate expectations the promise of higher Kiwi rates is supportive of the domestic currency's outlook.

"We expect the reprieve in August to prove short-lived and for the tightening cycle to start before year end," says Nathan Penny, Senior Agri Economist at Westpac.

Westpac note inflationary pressures in New Zealand are high and that a degree of this inflation is not simply being generated externally and therefore cannot be ignored by the central bank.

Inflation across the world's major economies has shot higher in 2021 as the effects of the global pandemic continue to be felt in supply chain disruptions and elevated commodity prices.

But for central banks what is important is how much price pressures are being generated in the domestic economy.

New Zealand's economy is now larger than it was prior to the pandemic with unemployment low and inflation at 3.3%, well above the Bank's mandated target.

The regular ANZ Business Outlook survey recently showed expectations for inflation over the year ahead rose to 3.05%, the highest level since late 2011, and a sign that expectations for higher prices are becoming entrenched. 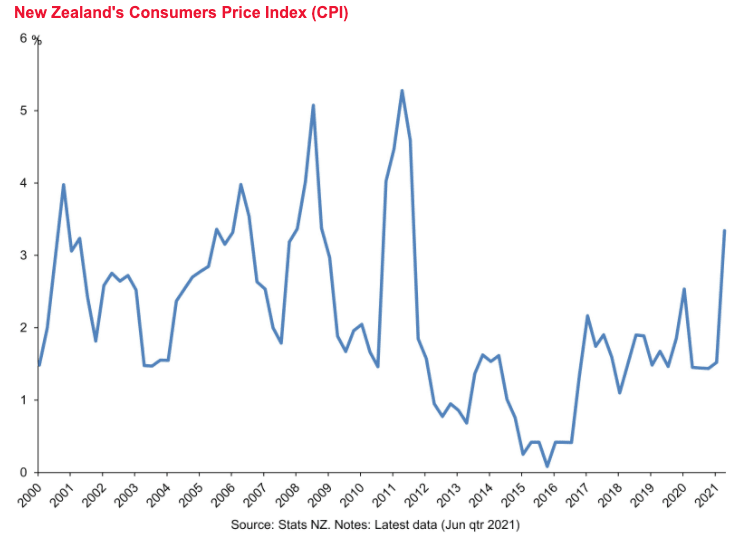 "Over the last week or two, Reserve Bank officials have been at pains to point out their keenness to act on these pressures," says Penny.

Although Westpac anticipate the RBNZ will raise rates by 25bp in November they aren't ruling out a move in October, a surprise that could generate further NZ Dollar upside.

The call comes as the New Zealand Dollar rebounds from multi-month lows against both the Pound and U.S. Dollar:

The Pound-to-New Zealand Dollar exchange rate has fallen back to 1.9384 at the time of publication, having been as high as 2.00 in August.

The below chart shows the New Zealand Dollar's trading patterns against the Pound (top) panel and against the U.S. Dollar (lower panel) since the start of 2021.

As can be seen, the GBP/NZD has been mirroring movements in the USD/NZD for much of the year: 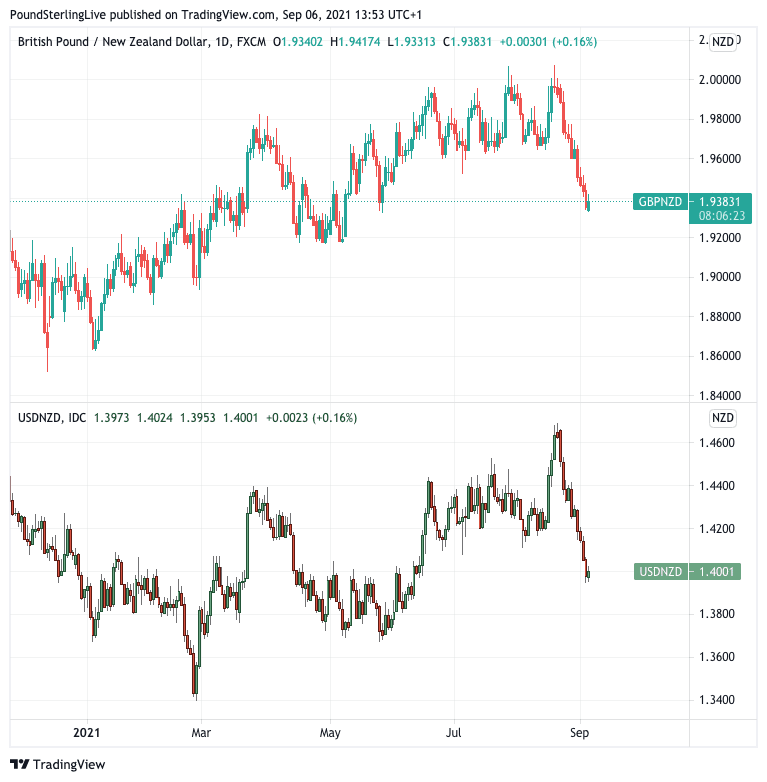 The chart confirms that to a great extent much of the price action in GBP/NZD is a function of NZD/USD and therefore what the Dollar does matters greatly for the entire spectrum of Kiwi exchange rates.

Note too however that there are still some intricacies in the GBP/NZD, namely that formidable resistance at GBP/NZD that appears to have stymied Sterling's advance against the Kiwi and will therefore likely remain a long-term objective for bulls.

The New Zealand Dollar's rebound kicked into gear on August 20, a pivotal moment for the foreign exchange market more generally given that it was here that the broader U.S. Dollar turned direction.

We note the Dollar to have reversed direction against the Pound, Euro and Australian Dollar around this time and further Dollar weakness could therefore aid not just the New Zealand Dollar but these currencies too.

Indeed, analysts at CBA have said they see some growing upside risks in the Australian Dollar given their belief Federal Reserve will likely only announce it intends to taper asset purchases in November, having previously expected the call to come in September.

Any delay to central bank monetary tightening - particularly at the Fed - is deemed positive for stocks and commodities while being a headwind to the U.S. Dollar.

For the New Zealand Dollar's outlook much therefore depends on how this pro-risk trade can extend for.

With this in mind, investment bank Crédit Agricole have told their clients they are upgrading their U.S. Dollar projections as they don't yet see Dollar outperformance as having ended.

"We upgrade our near-term USD outlook across the board because we expect the currency to remain supported from factors like the US economic outperformance and the Fed QE taper that could boost its rate and yield advantage in the near term," says Valentin Marinov, Head of G10 FX Strategy at Crédit Agricole.

If this call for Dollar strength is correct then the New Zealand Dollar's recent trend of recovery against the Pound and Euro could also have its limits.

"The USD can also benefit from its role as a liquid safe-haven currency during recurrent bouts of risk aversion fuelled by concerns about the negative growth impact from the pandemic and the tightening of global financial conditions," says Marinov.

But looking at a medium-term timeframe - generally considered over a multi-month period - the Dollar is expected to ultimately turn.

"In the medium term, we expect the US economic outperformance to become less pronounced and the Fed to embark on a very gradual policy normalisation which could keep US real yields negative," says Marinov.

Such a turning point in 2022 could ultimately allow for a broader rally in the New Zealand Dollar's value.