The Pound-to-New Zealand Dollar rate exchange rate was on course for its twelfth consecutive loss ahead of the weekend but would be likely to stabilise over the coming days if as NZD/USD meets nearby technical resistances on the charts, the Kiwi unit pauses for breath in its recovery rally.

New Zealand’s Dollar was the second best performer in the G10 contingent of major currencies for the week on Friday following extended declines in U.S. exchange rates as well as supportive outcomes for commodity and stock markets.

Friday’s price action came as the Northland region joined the remainder of New Zealand - with the exception of Auckland - when exiting the ‘lockdown’ inducing Alert Level 4 in favour of the less imposing restrictions in place at Alert Level 3 following a two-week shut-in response to the latest coronavirus outbreak.

“The Kiwi has been one of the better performers and is approaching, or has broken, key levels on a number of crosses. The local Delta outbreak remains a key concern, but markets are doing their level best to look through it,” says David Croy, a strategist at ANZ, who sees a risk of GBP/NZD falling to 1.9325 up ahead.

“The higher and steeper NZGB yield curve is also giving the NZD a bit of a tailwind; that’ll likely persist for a couple more weeks,” he adds.

The Kiwi rose against all but a resurgent Australian Dollar on Friday as well as for the week overall, with the main New Zealand exchange rate NZD/USD on course for its seventh consecutive gain as Sterling looked set to sign off on a 12th day of declines against its antipodean counterpart.

Pound-New Zealand Dollar declines have this week been driven in their entirety by an extension of the Kiwi Dollar’s sharp recovery from late August lows, which has been attributed by analysts to a mixture of domestic and international factors. 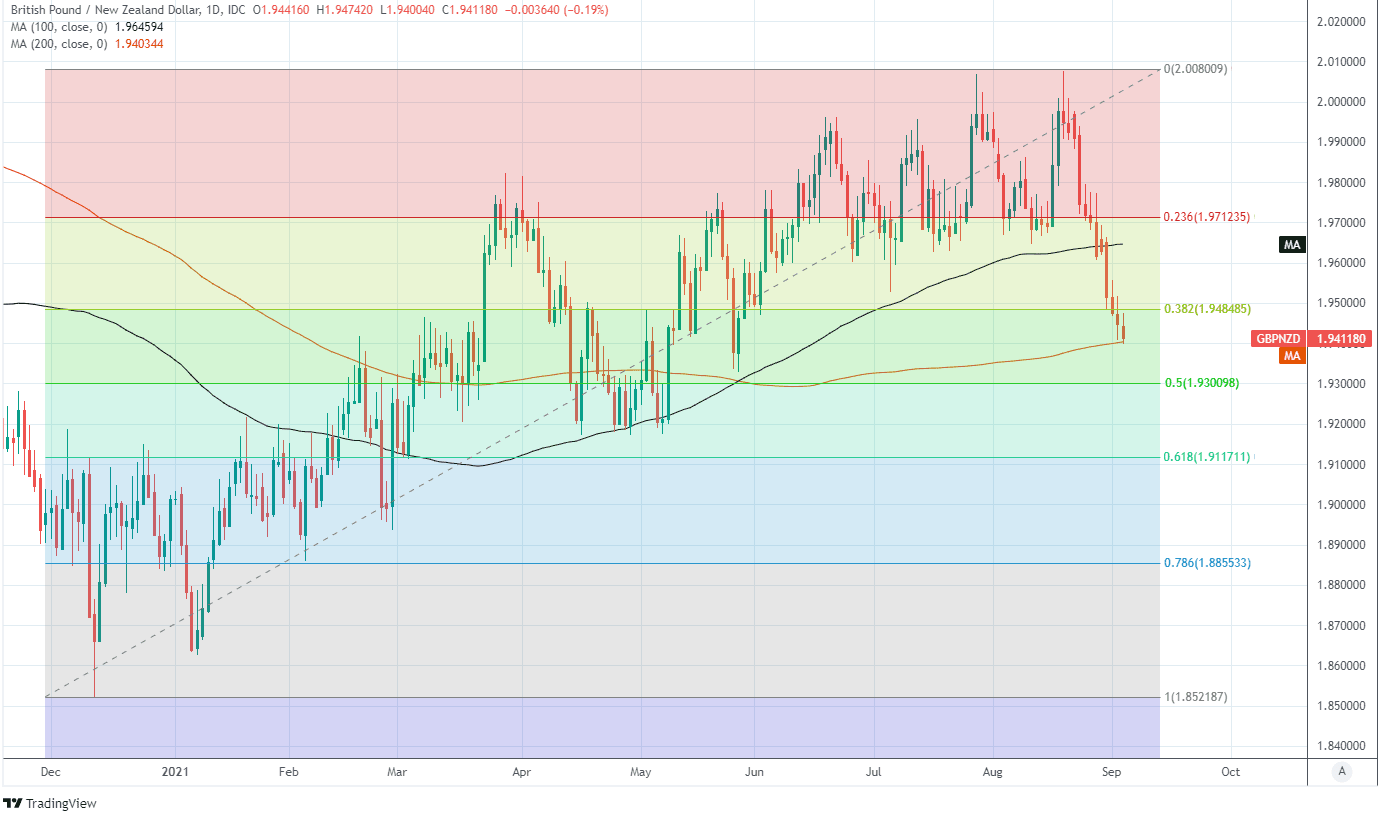 “Yesterday we learned the NZ terms of trade lifted a further 3.3% in Q2. A decent lift in import prices was more than offset by a whopping lift in export prices, such that the terms of trade are now back near record highs,” says Mike Jones, a senior economist at ASB Bank.

“As with interest rate differentials, the high terms of trade are of course a strong fundamental support for the NZ dollar, something we’ve been banging on about for some time. It’s a key part of the reason we’ve been expecting dips in the currency to be shallow and for the appreciation trend to resume once the current COVID fog begins to clear,” Jones writes in a Thursday note.

New Zealand’s tentative effort to ease restrictions on social contact and business activity offers hope to the market that its latest experience with the coronavirus will be shorter-lived than that of Australia, offering the economy a better shot at delivering the performance necessary in the months, quarters and years ahead in order for the Reserve Bank of New Zealand to deliver on its guidance and meet market expectations for interest rates.

“We remain bullish NZD/USD for the week ahead. A break above 0.7090 would signal a potential rise to the 0.7300 area. The primary driver of this two-week old rally is the USD,” says Imre Speizer, head of NZ strategy at Westpac in Auckland, writing in a Thursday research note. “The main risks to our bullish NZD view are a worsening of the Delta outbreak, and a rebound in the USD (noting payrolls on Friday).”

The RBNZ has already indicated that it will seek to avoid allowing coronavirus-related restrictions to dislodge the bank from its new monetary policy course, one that envisages New Zealand’s main interest rate lifted from 0.25% in early September to a little over 2% by 2024, which has proven increasingly supportive of the New Zealand Dollar since late August and has helped to undermine the earlier uptrend in GBP/NZD.

Meanwhile, the overall U.S. Dollar trend as well as changes in commodity and other risk asset prices have also been important contributors to the New Zealand and Australian Dollar out performances of the last week, although what matters most for the Pound-to-New Zealand Dollar rate going forward is of NZD/USD is able to overcome a looming set of resistance levels on the charts over the coming days, or if it’s recovery is ultimately stalled by them.

“NZD/GBP is gathering steam after the break above 0.51 [Below 1.96 in GBP/NZD], capitalising nicely on momentum. Short-term technicals still look positive,” ANZ’s Croy says.

The Pound-to-New Zealand Dollar rate always closely reflects the relative performance of NZD/USD and GBP/USD, and could be likely to stabilise temporarily around its 200-day moving-average at 1.94 over the coming days.

This would be especially likely if either the U.S. Dollar bounces following its trio of declines this week or if for any other reason NZD/USD proves unable to immediately get past its pre-weekend peak of 0.7134. 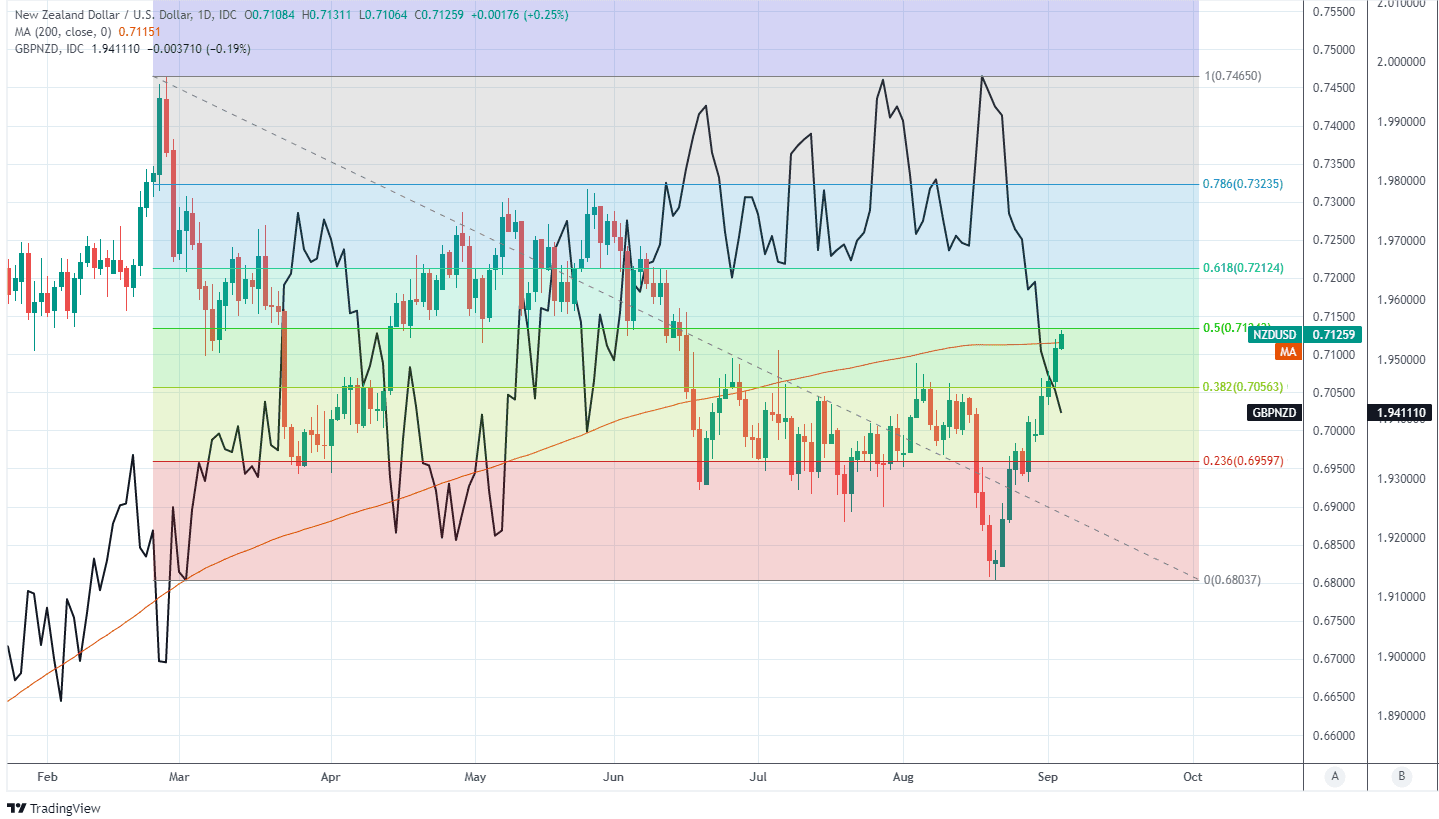