New Zealand’s Dollar outperformed major counterparts in the mid-week session when continuing a recovery from 2021 lows against the U.S. Dollar that has curtailed last week’s GBP/NZD rally and which analysts say now threatens to engineer a further slide in the EUR/NZD rate.

The Pound-to-New Zealand Dollar rate was quoted as low as 1.9703 when testing a notable level of technical support coinciding with the 23.8% Fibonacci retracement of Sterling’s 2021 uptrend on the charts, having been pushed lower from levels as high as 2.0078 last week.

“The RBNZ communications machine is still going full tilt following last week’s last-minute call to delay rate hikes. The Bank has been keen to spread the word that it was only timing that stopped a rate rise (hiking rates on the 1st day of lockdown being a bad look), not necessarily any ill economic effects from the lockdown,” says Mike Jones, a senior economist at ASB Bank in Auckland.

While the Pound has edged lower against many currencies in the five trading days to Wednesday, the New Zealand Dollar has climbed out of its earlier trough against the U.S. Dollar, accentuating the decline in GBP/NZD and lifting the Kiwi against all other majors for the period also. 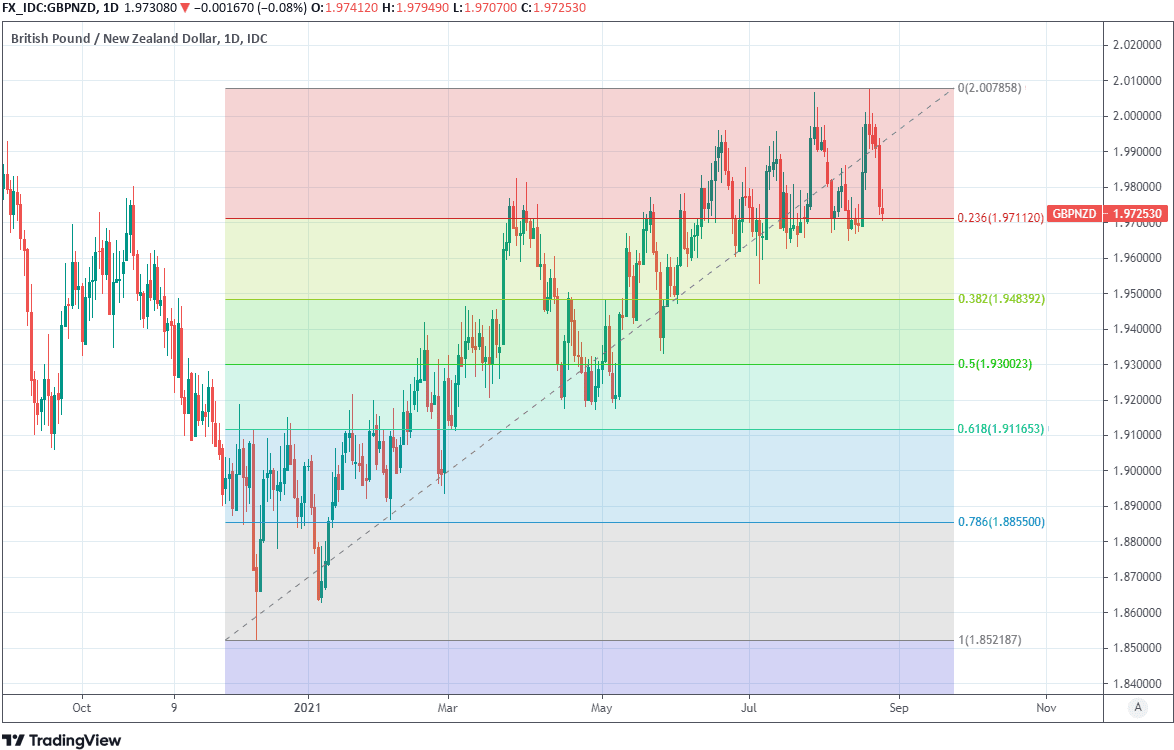 The Kiwi has outperformed for the week overall following commentary from the Reserve Bank of New Zealand (RBNZ) that has provided improved clarity on the outlook for interest rates after the bank’s plans to lift its cash rate were scuppered by another ‘lockdown’ last week.

The RBNZ has made clear that had it not been for Wellington’s decision last Tuesday to return the country to Alert Level 4 and a state of all-out lockdown, the cash rate would’ve been raised from its all-time low of 0.25% in a process the RBNZ assumes will eventually see the benchmark for borrowing costs lift as far as 2.25%; as part of an effort to ensure that returning inflation pressures are kept under control over the medium-term.

“It was less about Covid stopping us doing it and it was more about the timing of communicating our policy move - was the 18th of August the right day as the country went into lockdown?” Assistant Governor Christian Hawkesby told Bloomberg News in an interview on Tuesday.

New Zealand’s return to Alert Level 4 is the first since March 2020 and potentially a significant blow to the country’s previously outperforming economy, although the rub for Sterling and some other currencies is that RBNZ staff including Assistant Governor Hawkesby and the bank’s chief economist Yuong Ha have both been clear in media interviews this week that policymakers are yet to see anything to deter an interest rate rise later this year.

Hawkesby was also reported to have told Bloomberg that future decisions on the cash rate “aren’t going to be tightly linked to Covid and whether we’re in lockdown or not, or what level of mobility restrictions are in place.”

This is due in part to the impact these measures have had on the inflation the bank is charged with managing in the context of a 1%-to-3% target.

“It looks like the RBNZ wanted to put the record straight regarding events at last week's rate meeting,” says Chris Turner, global head of markets and regional head of research at ING. “The start of the RBNZ tightening cycle now looks fully priced for the October 6th meeting.

With ample government financial support provided to companies and households, many economists expect damage to the economy to be reversed quickly once the latest outbreak is brought under control, while expectations for a period of above-target inflation continue to be fueled by shortages in the supply of certain goods as well as labour due border closures and other containment measures in New Zealand as well as elsewhere in the world. 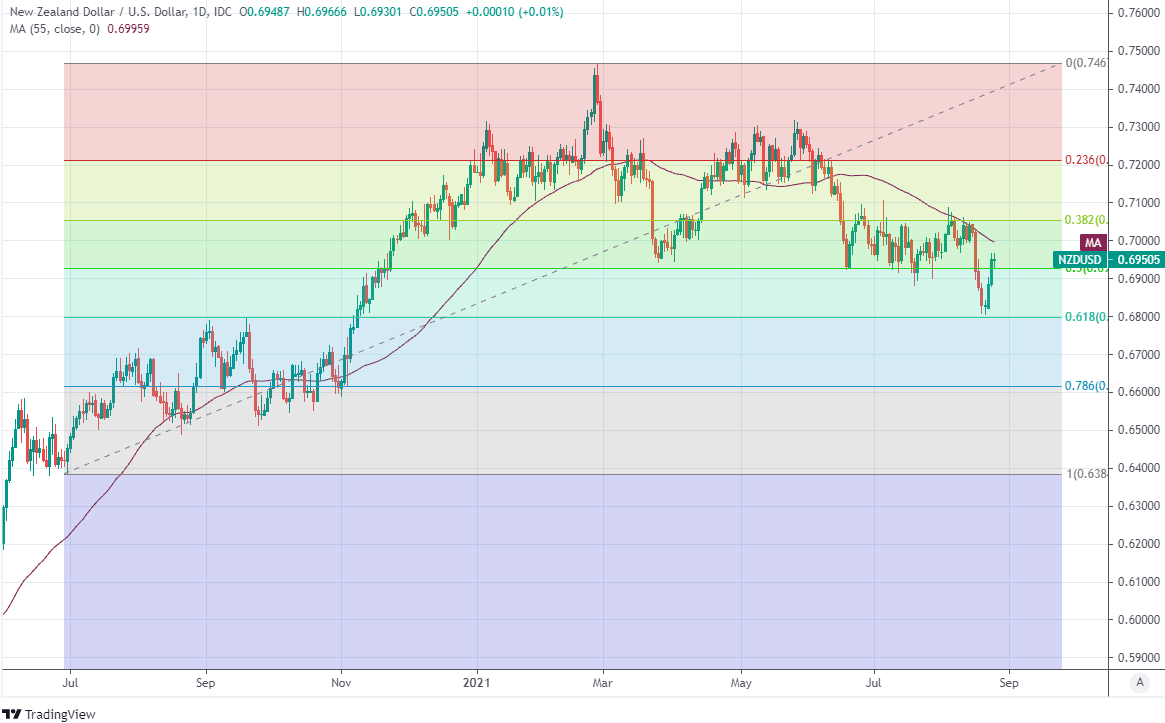 Above: NZD/USD at daily intervals, recovering from 2021 lows coinciding with the 61.8% Fibonacci retracement of its extended rally from July 2021.

“We think that the EURCAD and EURNZD crosses are exposed to a strong correction in the coming weeks if the mood in markets normalizes and the focus turns towards policy tightening in Canada and New Zealand in contrast to the ECB’s long hold,” says Shaun Osborne, chief FX strategist at Scotiabank. “We expect the EURNZD to aim for the 1.66/65 area with further downside possible until ~1.6325.”

This week’s commentary from Hawkesby and Yuong Ha has seen pricing in the overnight-index-swap market recovering higher such that the market-implied cash rate for October 06 sat aty 0.44% on Wednesday, implying around an 84% chance of a 24 basis point rate rise that month.

This is supportive of the New Zealand Dollar in relation to an overwhelming majority of currencies but especially those with central banks that are widely perceived to be among the last in line to eventually lift their interest rates, like the European Central Bank, Bank of Japan and Swiss National Bank among others, although this supportive influence could yet become stronger still.

New Zealand’s Dollar could potentially garner stronger support, and further outperform others in the months ahead if the market begins to perceive the RBNZ as likely to opt for a larger rate rise than the 0.25% step that has increasingly been priced back into financial markets this week.

“Hawkesby, if anything, stepped up the hawkish rhetoric,” says ASB Bank’s Jones. “For the first time, to our minds, Hawkesby confirmed they may have hiked 50bps last week, absent lockdown: “A 50 basis point move was definitely on the table…”. A 50bp hike later this year wasn’t ruled out.” 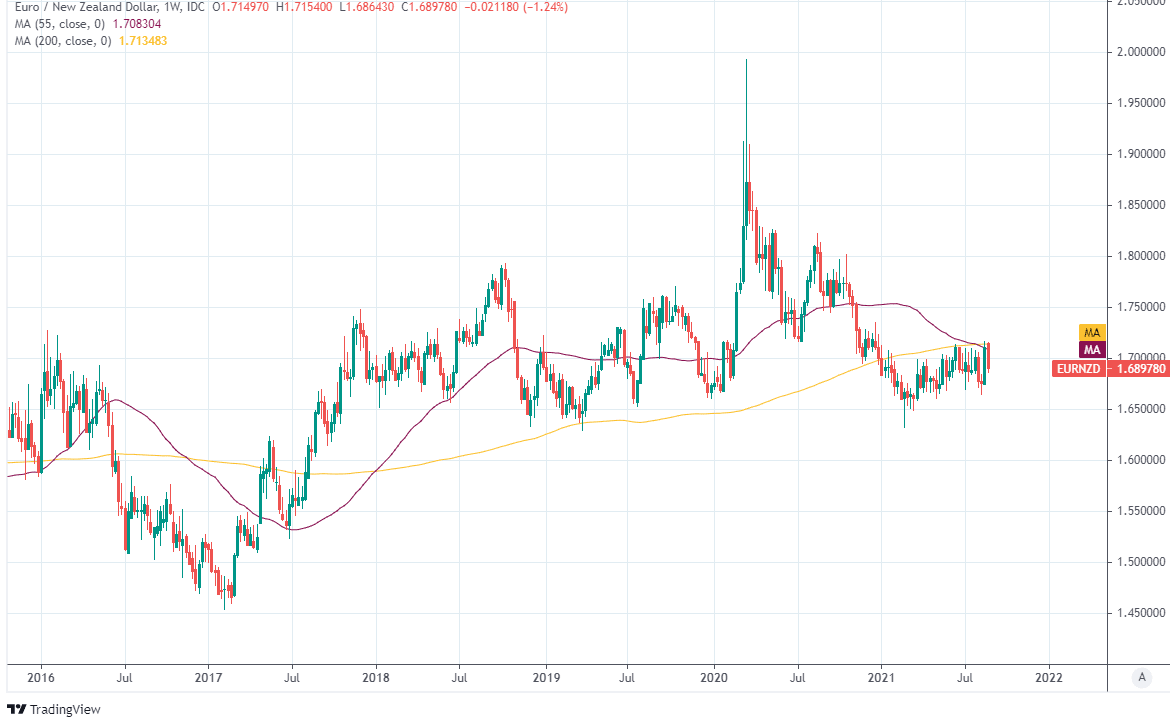 Above: EUR/NZD at weekly intervals, repelled lower this week by its 200-week moving-average at 1.7138.