The Pound-to-New Zealand Dollar rate beat a further retreat from one-year highs early on this week in the latest indication that its rally could be stalling, and may now struggle to advance beyond the nearby 2.00 level if the Kiwi continues to stabilise over the coming days.

The New Zealand Dollar lagged other commodity currencies on Monday but edged higher against the U.S. Dollar, Euro, Swiss Franc and Sterling among others after appearing to overlook Wellington’s extension of the country’s third ‘lockdown’ to run at least until midnight on Friday.

New Zealand’s latest coronavirus outbreak had grown from just a solitary infection at the point when the country returned to ‘lockdown’ last Tuesday to more than 107 by Monday, although the main Kiwi exchange rate NZD/USD has continued to stabilise in price action that appears to have played a role in calling a halt to the short-lived rally in the Pound-to-New Zealand Dollar rate.

This is potentially due to the Reserve Bank of New Zealand (RBNZ) indicating twice in the last week that it could still look to raise the Kiwi cash rate from its crisis low of 0.25% over the coming months, with the latest coming from the bank’s chief economist this Monday.

“As optimistic as one can be (given NZ went hard, early), markets will still take things one day at a time, especially given what they have seen in Australia, which tends to colour views on the Kiwi,” says David Croy, a strategist at ANZ. 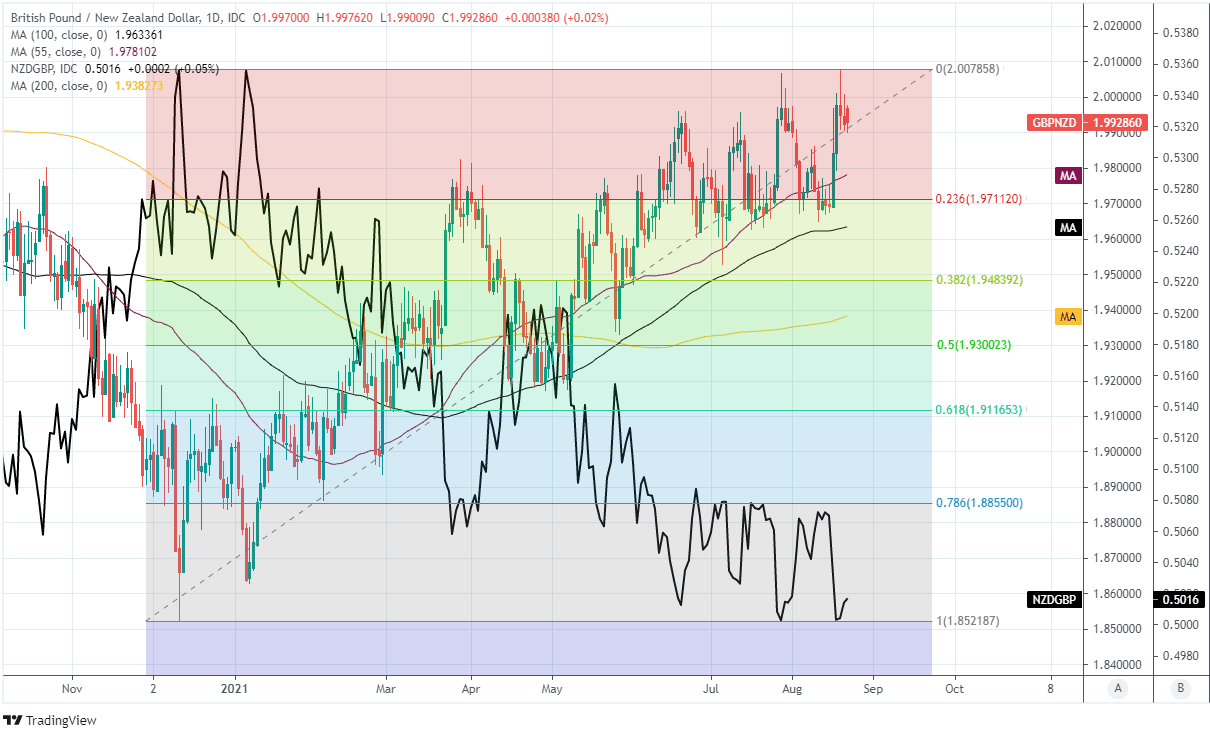 Above: Pound-to-New Zealand Dollar rate shown at daily intervals alongside NZD/GBP, and with major moving-averages as well as Fibonacci retracements of 2021 rally indicating possible areas of support.

The RBNZ already swerved an initial interest rate rise last week but indicated at the time that the move had merely been delayed rather than derailed, which is a sentiment that was reiterated by chief economist Yuong Ha in a telephone interview with Reuters this week.

“We’re in a much better position to manage it via fiscal policy. We understand what those policies are and how they can be used effectively. Monetary policy will be there to support,” Governor Adrian Orr said of the coronavirus outbreak and resulting ‘lockdown’ in last week’s press conference.

“I don’t want this conference to get confused. Our general path is toward tightening monetary policy,” Orr said last week.

Market attention has since shifted to the bank’s meetings in October and November where it’s expected to announce rate rises worth a total of 0.50% in 0.25% increments, marking the beginning of a process to steadily withdraw the monetary support provided to the economy during the crisis in a bid to ensure that rising inflation rates remain consistent with its 1%-to-3% target band over the coming years.

“The longer the lockdown, the less convinced interest rate markets will be that the RBNZ will soon tighten,” says Joseph Capurso, head of international economics at Commonwealth Bank of Australia. “NZD/USD can remain heavy against a backdrop of a firm USD and near‑term economic uncertainty.”

Assumptions published in the bank’s latest quarterly monetary policy statement indicated last week that it now expects to lift the cash rate as far as a little over 2% in the coming years, which potentially explains how and why the Kiwi has been able to find its feet in recent days.

However, local analysts are unconvinced that the New Zealand Dollar’s nascent stability is sustainable and some have warned of further declines ahead for NZD/USD this week, which would have bullish implications for the Pound-to-New Zealand Dollar rate.

“NZD retains potential for further downside, a test of 0.6800 is likely near term. NZ markets will be fixated on developments in the local Covid outbreak, in particular the possibility of a longer lockdown in areas which have seen cases rise sharply,” warns Imre Speizer, head of NZ strategy at Westpac. 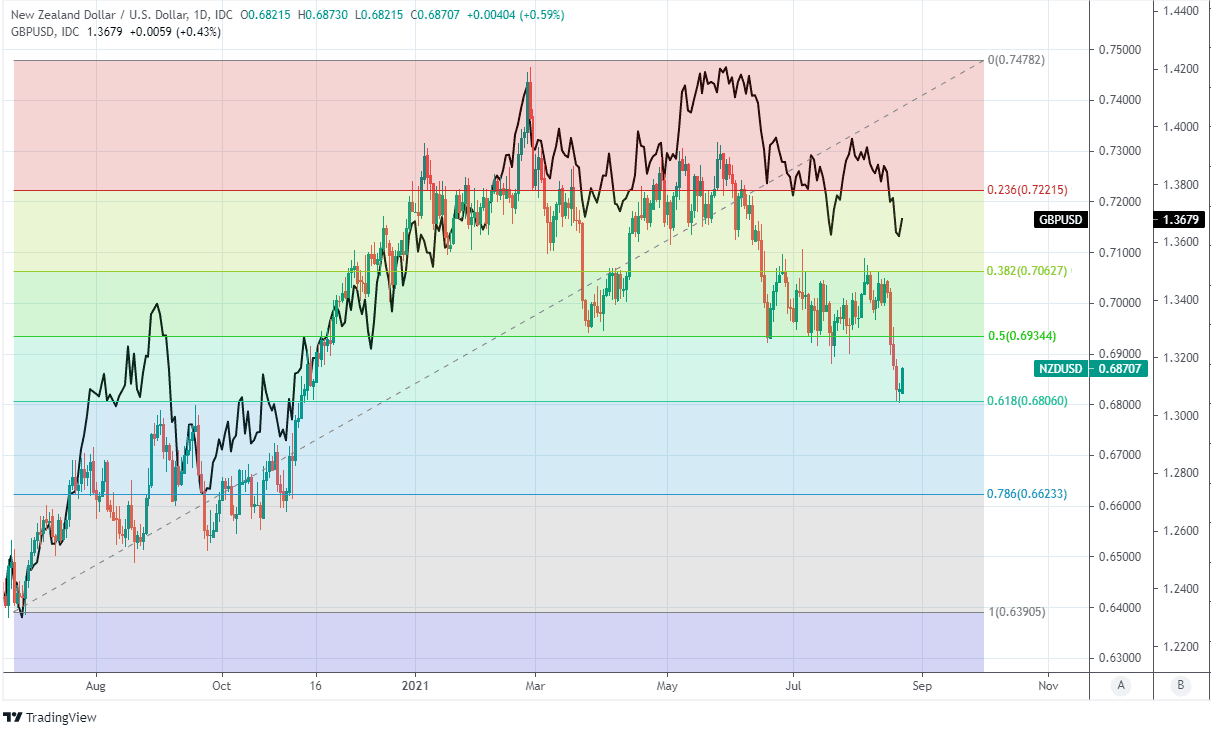 The Pound-to-New Zealand Dollar rate would rise as far as 2.01 this week if NZD/USD retests the 0.68 level flagged by Westpac’s Speizer, and if at the same time the main Sterling exchange rate GBP/USD holds steady around Monday’s 1.3670.

Those would be only limited gains from Monday’s 1.9920 for GBP/NZD, which always closely reflects the relative performance of NZD/USD and the main Sterling exchange rate GBP/USD.

The Pound-to-New Zealand Dollar rate would also struggle to rise at all this week if at the same time as NZD/USD turns lower, the main Sterling pair also follows suit, and recently-softer UK economic data provides reason for why it might.

“August’s flash PMIs underline two key risks to our forecasts. First, that the economic recovery might be slowing a bit faster than we had thought, posing a downside risk to our view that the economy will return to its pre-pandemic level by October. Second, materials and staff shortages might feed into second-round effects of rising wage growth, meaning that inflation is higher for longer,” says Keira Tompkins at Capital Economics.

IHS Markit Flash PMI surveys for August showed the UK economy struggling to gather further steam mid-way through the third-quarter on Wednesday, and are just the latest in a series of soggier-than-anticipated figures to emerge from the UK economy in recent weeks.

These came after July’s retail sales fed suspicions last Friday that economic momentum slowed this quarter, which has helped cement a recent decline in confidence among those in the market wagering that the Bank of England (BoE) could be likely to raise its interest rate next year. 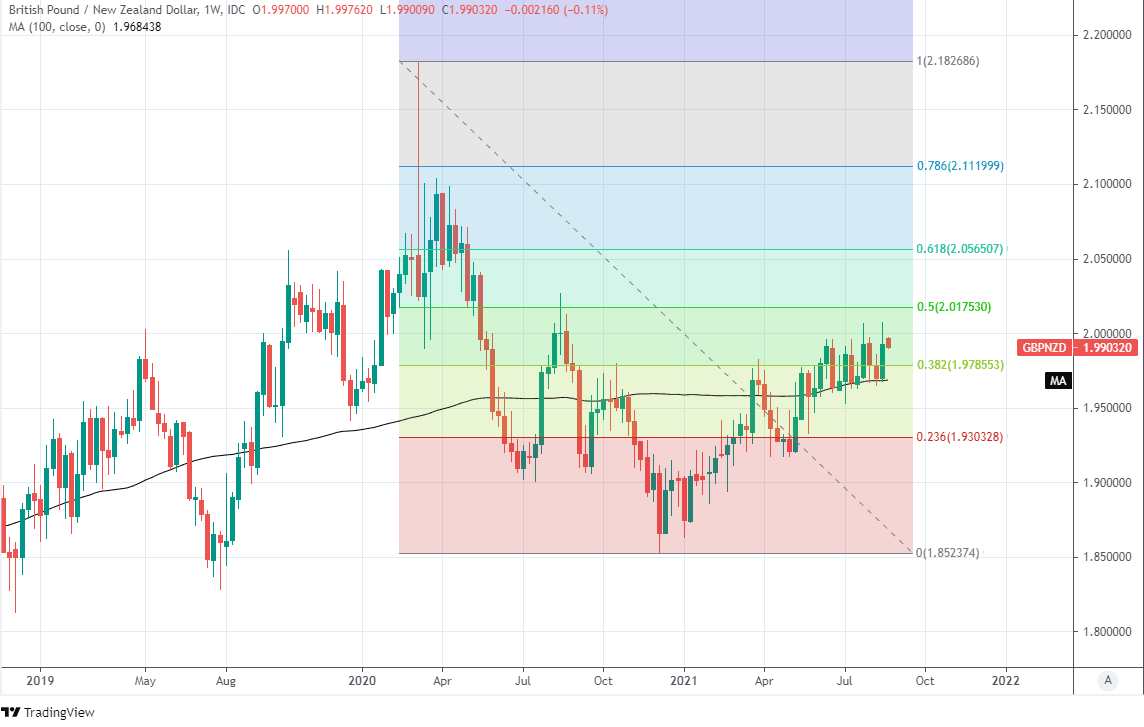 Above: Pound-to-New Zealand Dollar rate shown at weekly intervals: Supported above 100-week average at 1.9684 but facing resistance from 50% Fibonacci retracement of correction lower from March 2020 highs.