Seasonality could pull the Pound higher against the New Zealand Dollar in August 2021, a month in which the Kiwi traditionally tends to lose value against major peers, with analysts saying this performance is linked to global investor trends that typify this time of year.

A look back at the past decade of New Zealand Dollar performance shows it has lost value to the Pound and U.S. Dollar in all years but two, and even in these two outlier years the gains have been all but insignificant.

Strategist Takashima-san at Citi Bank has flagged this seasonal quirk in the New Zealand Dollar to his clients, telling them to be on the lookout for a repeat in 2021.

"NZDUSD tends to fall in the G10 currency space in August with more risk avoidance than in other months. This August seasonality is a type of anomaly, and we see no clear reason," says Takashima-san in a recent research briefing. 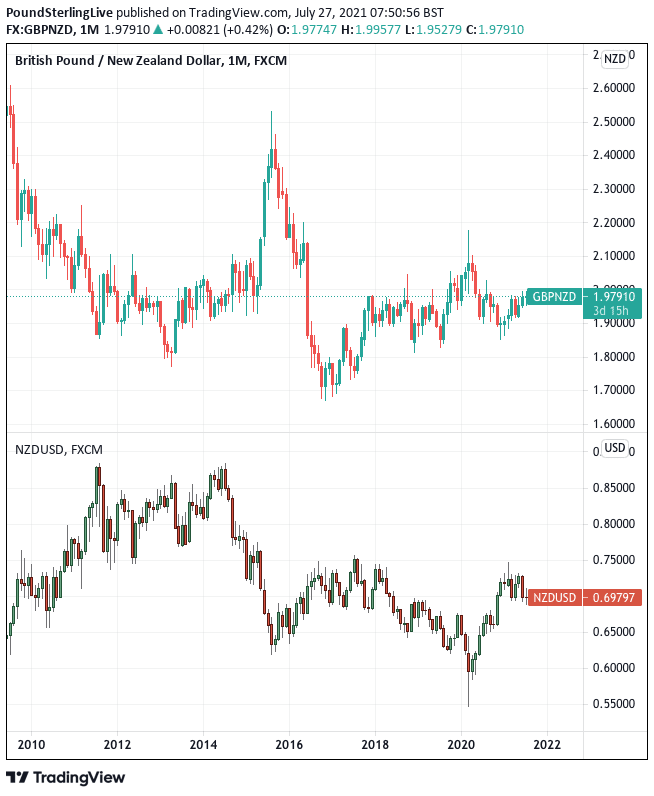 Above: Monthly chart for GBP/NZD (top) and NZD/USD (bottom).

One of the years in which the exchange rate recorded a loss was 2016, perhaps understandable as this was a year in which the Pound suffered a significant post-EU referendum slump.

The New Zealand Dollar is considered a 'high beta' currency in that it is positively correlated to global investor sentiment, rising when major stock market indices do.

And August is typically a poor time for investor returns with the S&P 500 - the global benchmark for risk - tending to struggle in the summer months.

Takashima-san says unless U.S. equities perform more strongly than past averages next month, a repeat of the New Zealand Dollar's traditional August decline is likely to be repeated.

But seasonality is by no means a perfect predictor of future performance: August 2020 saw the S&P deliver its best performance since 1984 after it rose by more than 7%.

2020 was of course an exceptional year given the turmoil in markets wrought by the global pandemic that saw stocks collapse at the start of the year to then stage a strong recovery.

For the New Zealand Dollar much will therefore depend on whether August 2021 is another exceptional year or whether the market is now settled enough to revert to its old tricks.

"We maintain our constructive view of NZD over the medium-term, although it will take some time longer for it to bottom out," says Takashima-san.

Citi says the Reserve Bank of New Zealand meeting due on August 18 will not be a definitive event to end the gradual downtrend in the New Zealand Dollar that is expected.