The New Zealand Dollar languished near to 2021 lows ahead of the mid-week session, keeping GBP/NZD near one-year highs although a recovery by the Kiwi could wound Sterling if on Wednesday morning the Reserve Bank of New Zealand (RBNZ) affirms the market consensus that it could begin lifting its interest rate early next year.

New Zealand’s Dollar was the worst performing major currency of the week to Tuesday and retains a mere middling spot in the major currency league table for the last month as well as 2021 year ahead of July’s all-important monetary policy decision from the RBNZ, which is due out at 03:00 London time on Wednesday.

The New Zealand Dollar’s recent performance suggests that currency traders have been reluctant to stock much faith in the RBNZ’s own signal, economic forecasters or in derivative market participants’ views on the outlook for interest rates in New Zealand, which by implication suggests that the Kiwi currency could be sensitive to the outcome of Wednesday’s decision irrespective of which way it cuts.

“One could argue that perhaps the FX market missed the RBNZ's bat signals, but we seriously doubt that,” says Stephen Gallo, European head of FX strategy at BMO Capital Markets, who cites the Kiwi’s lack of success against non-U.S. currencies over the last month as a curiosity.

“If the RBNZ does as expected and turns trial balloons into forward guidance, will the NZD response remain remarkably small? If so, other central banks can follow that lead, and perhaps will over the next 3 months,” Gallo says. 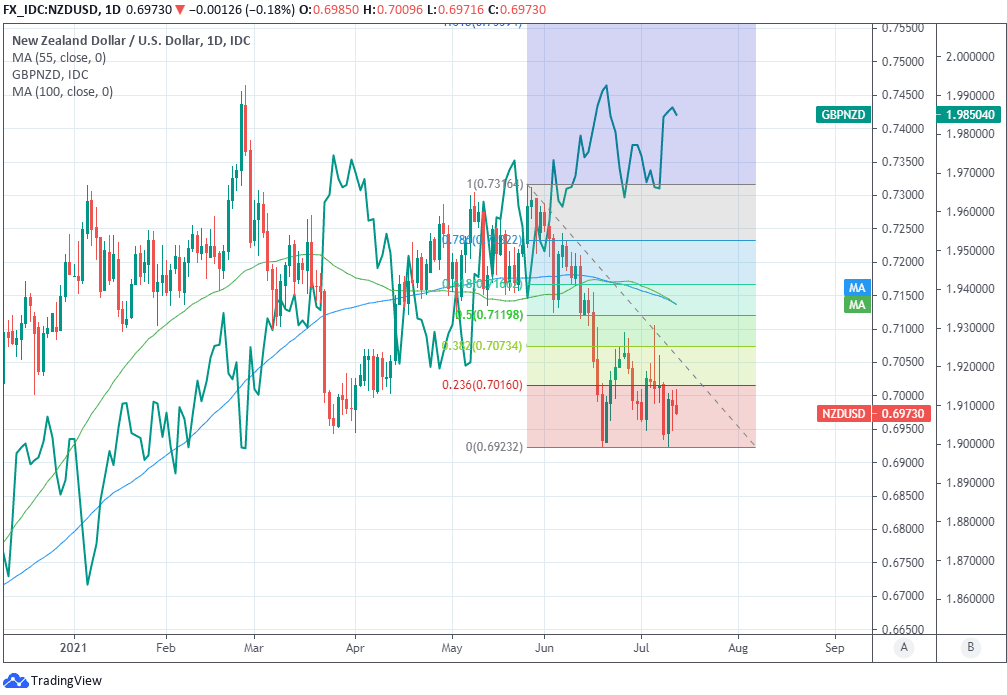 Above: NZD/USD at daily intervals, loitering near 2021 lows, with key moving averages, Fibonacci retracements of June sell-off and GBP/NZD.

New Zealand’s Dollar has barely risen since the beginning of June and throughout the period in which investor expectations of the cash rate have shifted, which is one reason for why it could potentially do well on Wednesday and through the rest of the week if the RBNZ adjusts either its language or assumptions about the economy to vindicate investors and traders for their evidently optimistic views on the outlook for interest rates.

“All eyes in the coming days will be on the RBNZ to see if it can meet the market’s expectations for hikes,” says David Croy, a strategist at ANZ. “Given how far market pricing has already moved, it may be difficult for the central bank to ‘out-hawk’ the market. As such, it may be difficult for the RBNZ decision to generate a large move in the Kiwi unless there is a large shift in the language.”

Pricing in the overnight-index-swap market - which enables investors and traders to speculate on as well as hedge themselves against changes in interest rates - has shifted sharply since the beginning of June so that it implied by Tuesday that there’s an absolute certainty the RBNZ will lift its cash rate from 0.25% to 0.50% before April 2022.

Such an outcome could lift the main Kiwi exchange rate NZD/USD away from its 2021 lows and weigh on the Pound-New Zealand Dollar rate, which was trading around 1.9850 on Tuesday but would fall to around 1.95, if not below, should the main Sterling exchange rate GBP/USD continue loitering around Tuesday’s 1.3850 while NZD/USD stages a rebound. 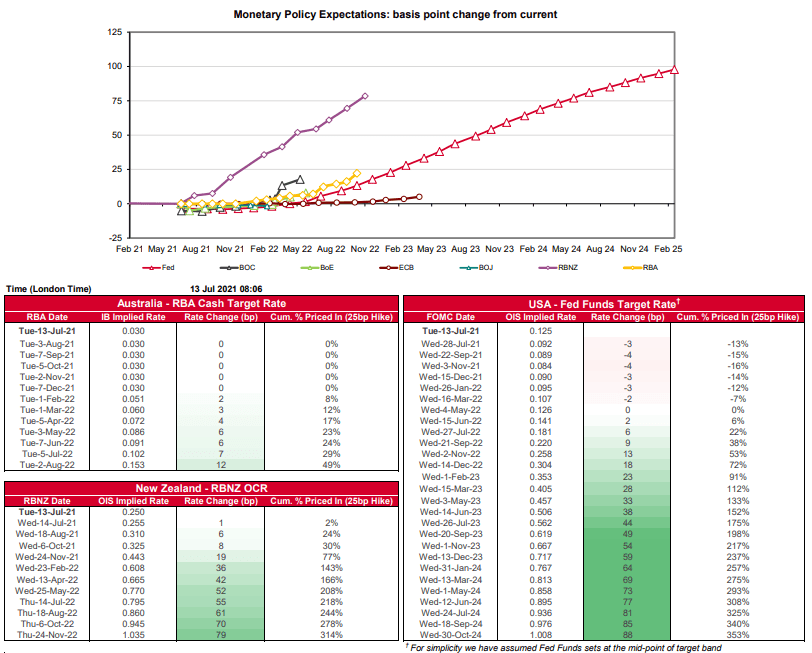 “Previously, we had assumed that the cash rate would remain on hold until 2024 due to the lingering downside risks for activity and inflation. We recently brought the forecast start of rate hikes forward to late-2022, and have now pulled that start date even closer in response to the continued strengthening in New Zealand’s economic landscape,” says Satish Ranchhod, a senior economist at Westpac.

Any NZD/USD rebound would need to reverse half of June’s Kiwi Dollar decline however, by taking it up to 0.7117, in order to pull GBP/NZD that far.

Should NZD/USD run out of steam sooner, around the 38.2% retracement of its June decline at 0.7173, GBP/NZD would test the waters slightly below the 1.96 handle but perhaps not by enough to decisively erode Sterling’s technical supports in that area.

“NZD/USD is holding just under 0.7000. The RBNZ meeting and updated Monetary Policy Review can underpin a slightly firmer NZD. Our ASB colleagues expect the RBNZ to signal it is prepared to lift the OCR by 25bps to 0.50% at the November meeting,” says Elias Haddad, a strategist at Commonwealth Bank of Australia. 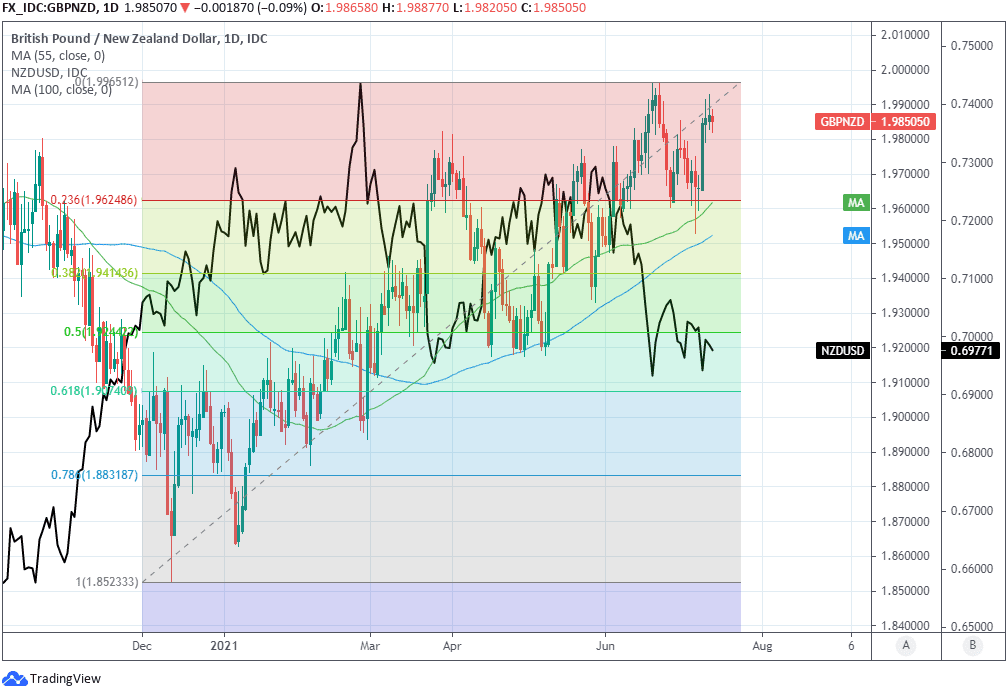 Expectations of an earlier normalisation of RBNZ monetary policy are not entirely without merit given that New Zealand has all but eradicated the coronavirus from its shores and the economy has surpassed all expectations with its initial rebound, but the real risk this Wednesday is that the RBNZ takes issue with what are without doubt exceptionally ambitious market expectations.

After all, key parts of New Zealand’s economy are still struggling due to national border closures, as many other countries around the world continue fighting a so-far losing battle to contain the coronavirus.

There’s at least some chance the RBNZ could deem expectations of a move as soon as the first quarter next year as too ambitious and seek to give the market a reality check on Wednesday.

If that’s the outcome then it would almost certainly lead to a lower NZD/USD and a higher GBP/NZD, although with the main Kiwi exchange rate GBP/USD lacking any obvious technical support beneath 0.6923 before it gets to 0.6776.

Losses for the Kiwi could in that scenario lift GBP/NZD back above the two-for-one level for the first time since the onset of the coronavirus crisis.

GBP/NZD would trade above 2.04 at least briefly in the event that NZD/USD fell back to 0.6776, even with the main Sterling exchange rate trading at 1.3850 and near to three-month lows: The Pound-to-New Zealand Dollar rate always closely reflects relative price moves in GBP/USD and NZD/USD.