The Pound's rebound against the New Zealand Dollar is likely to fade around current levels given the proximity of a layer of technical market resistance and the looming Reserve Bank of New Zealand (RBNZ) policy update.

The Pound-to-New Zealand Dollar exchange rate (GBP/NZD) has rebounded back to 1.9870 at the time of writing, but the June 18-22 highs appear to indicate a later of resistance that might stall near-term gains. 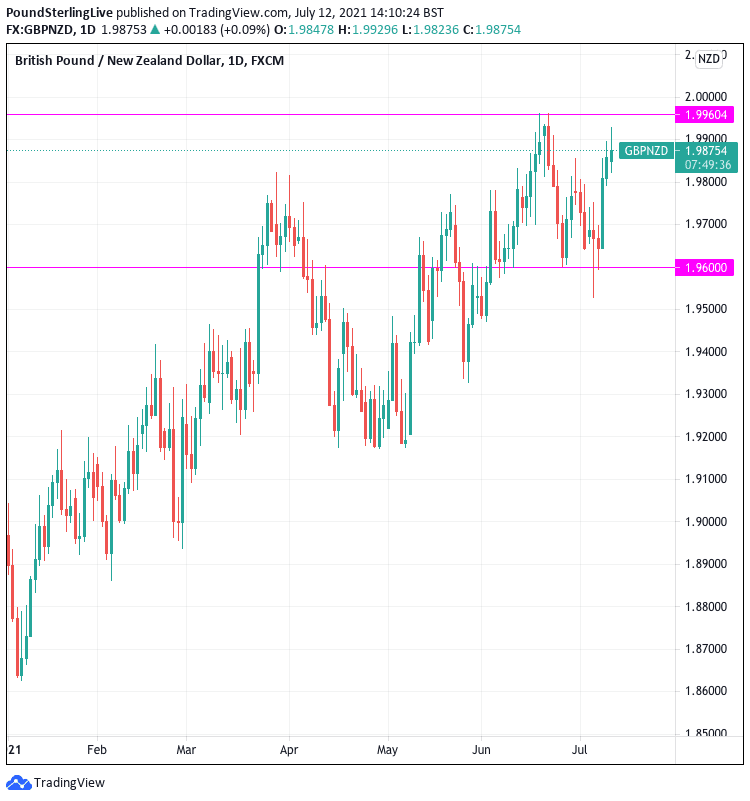 For a more decisive break higher to occur the fundamental picture would likely need to turn more bearish for the New Zealand Dollar and the only near-term catalyst for such a move is Wednesday's RBNZ rate decision.

This stance is on balance supportive of New Zealand Dollar valuations and therefore provides a cap on GBP/NZD's upside potential.

"The RBNZ's hawkish shift at the May meeting and the stronger data that has followed places the Bank as the most hawkish in the Dollar Bloc and one of the most hawkish amongst Developed Market Central Banks," says Prashant Newnaha, Senior Asia-Pacific Rates Strategist at TD Securities.

The New Zealand economy is outperforming the central bank's expectations with growth for the first quarter of 2021 coming in at 1.6%, well above a Reuters poll forecast of 0.5% growth and the RBNZ's own estimate for a 0.6% fall.

With the global economy continuing to recover and New Zealand remaining largely free of Covid-19, the RBNZ will now struggle to justify record-low interest rates.

This is particularly the case given inflation looks to now have exceeded the RBNZ's upper 2.0% limit.

In addition, New Zealand's house prices continue to rise despite the introduction earlier this year of government measures to try and take some heat out of the market.

"Markets are almost fully pricing in a rate hike by year-end from the RBNZ, which is now looking increasingly likely," says Francesco Pesole, a foreign exchange strategist at ING.

"We think the chances of a late-2021 hike are 50/50, but surely the reasons to keep the stimulus going in other forms are lacking, so some material tapering should be on the way. This should keep the rate profile of NZD significantly more attractive," says Pesole.

However, Jane Foley, Senior FX Strategist at Rabobank, says the RBNZ might have noted the rise in expectations for higher interest rates, a development reflected by the increased cost of lending in money markets.

An increase in the cost of lending on money markets might not be welcomed by the RBNZ and this could prompt Governor Adrian Orr to strike a more cautionary tone on Wednesday with the explicit desire to calm expectations.

Any unexpected caution could disappoint against market expectations and result in a weaker New Zealand Dollar in the wake of next week's Monetary Policy Review.

"The sharp increase in tightening expectations that has taken place over the past week or so however raises the question of whether the RBNZ will be actually able to meet the market’s aggressive outlook," says Alexia Jimenez, an analyst with Credit Suisse.

The RBNZ could strike a 'dovish' tone by choosing to lean heavily on the external risks posed by rising global Covid-19 cases, caused by the more transmissible Delta variant of the virus.

Not only does the variant pose downside risks to global demand, which would inevitably impact on New Zealand's export earnings, but it poses a risk to New Zealand's zero-covid policy.

One only needs to look to Sydney where the current lockdown looks set to be extended again later this week.

The highly transmissible variant sets the bar for 'herd immunity' notably higher than is the case with other variants.

The UK is finding that even a strong vaccination programme is not enough to stop the spread of the virus entirely.

The variant therefore poses considerable risks to New Zealand which has a slow vaccine rollout and almost no natural population immunity.

For New Zealand to ever return to normal it will therefore have to at some point accept Covid-19 will inevitably take hold in the community.

"Aside from an offshore risk-off event, the only domestic event we can pinpoint that could see the RBNZ not hike this year and slow the pace of hikes next year is a surge in covid cases," says Newnaha.