The Pound-to-New Zealand Dollar rate had extended its recovery from nearby Fibonacci support around 1.96 ahead of the mid-week session but would be vulnerable to a decline below there if either the U.S. Dollar’s legs give out over the coming days, or if the market redevelops an appetite for the Kiwi.

Sterling exchange rates have eased lower since last week’s policy decision from the Bank of England (BoE) in which rate setters noted a better-than-expected performance of the economy since May’s forecasts but otherwise declined to provide fuel for a further advance by the Pound.

The BoE was clear about there still being plentiful scope for those forecasts to be further exceeded in the months ahead, although the minutes of the latest Monetary Policy Committee meeting also clearly cast the bank as keen to be patient until the lingering downside risks to its outlook fade.

This evidently gave a bullish speculative market reason for doubting whether it was such a good idea after all to bet that the BoE might by the second half of next year be in the mood to begin thinking about lifting the 0.10% Bank Rate.

The result was further profit-taking by some investors on earlier bets in favour of the Pound, which has fallen by a small fraction against all of its major rivals in the week to this Tuesday, including by ceding ground to the Kiwi.

“The 0.51 level of NZD/GBP hasn’t been re-attained and the BoE shock is fading, reducing the odds it will happen. The six month downtrend channel is still intact,” says David Croy, a strategist at ANZ, referring to what is also the 1.96 level of GBP/NZD. 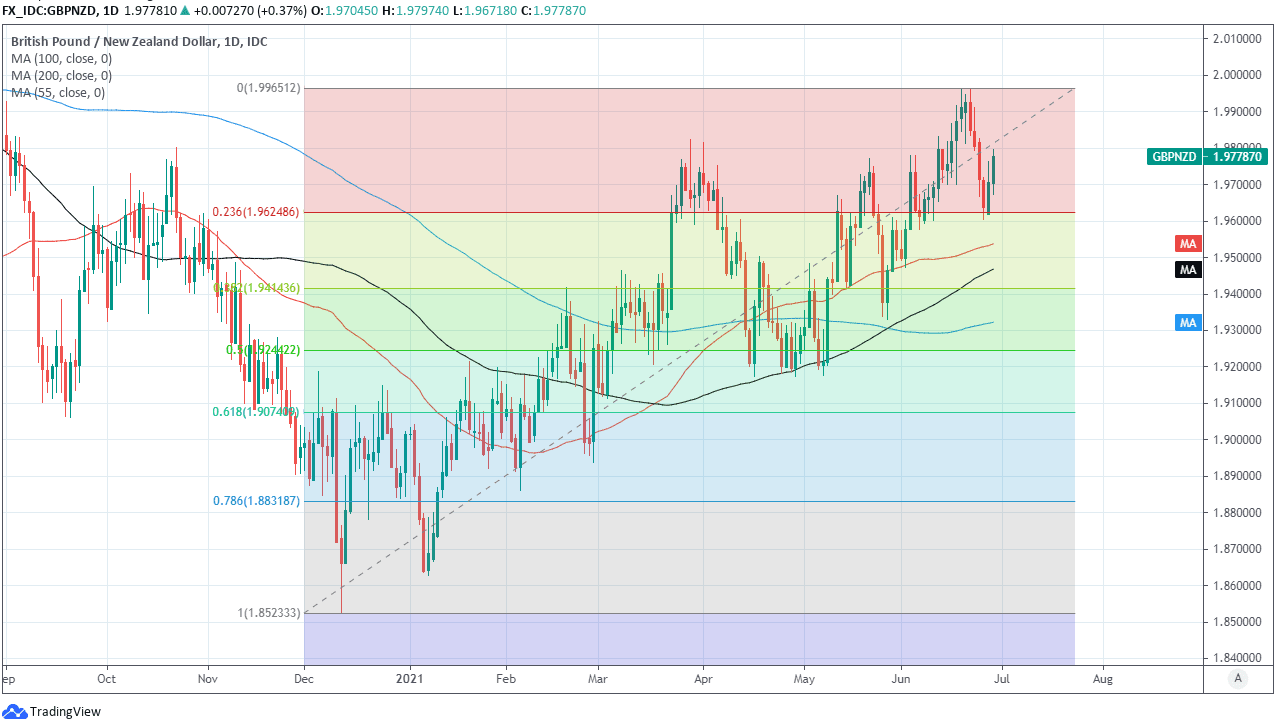 The Pound-to-New Zealand Dollar rate fell from year-highs around 1.9950 following the BoE’s decision, to test the 1.96 handle last week although now that the level has survived initial contact Croy and the ANZ team say there’s a reduced chance of it giving out at all.

The 1.96 threshold coincides closely with the 23.8% Fibonacci retracement of the Pound-to-New Zealand Dollar rate’s recovery from post-U.S. election lows seen around 1.86 during the early days of December, although the level is not impenetrable even if has already broken Sterling’s fall once.

“There is potential for this week-old NZD/USD bounce to extend past 0.7070 to 0.7120 during the next few days,” says Imre Speizer, head of NZ strategy at Westpac.

“Multi-month we remain bullish: the NZ economy is expected to remain buoyant over the remainder of this year, the RBNZ has signalled rate hikes, NZ-US yield spreads have resumed the trend rise, and commodity prices should rise further,” Speizer adds.

The Pound-to-New Zealand Dollar rate would be trade as low as 1.9380 if as the main Sterling exchange rate GBP/USD languished around its range lows near 1.38, as it did on Tuesday, the main Kiwi exchange rate NZD/USD staged a comeback toward weekly targets set out by Westpac.

Whether the Kiwi does make enough of a comeback to crimp GBP/NZD’s upward momentum will depend heavily upon if investors feel it's safe to buy the evolving interest rate outlook for the Reserve Bank of New Zealand (RBNZ).

“The RBNZ is the most hawkish central bank under our coverage. We expect the RBNZ to start tightening monetary policy more than one year before the FOMC, which is a tailwind for the NZD,” says Elias Haddad, a senior FX strategist at Commonwealth Bank of Australia.

With both UK and New Zealand economic calendars devoid of major data for the coming week, the RBNZ story is about the only thing that could potentially cultivate a preferential market appetite for the New Zealand Dollar ahead of the bank’s Wednesday, 14 July policy decision.

Exactly how the bank handles increasingly hawkish market expectations at that point will be a key influence on the outlook for Kiwi exchange rates including the Pound-to-New Zealand Dollar rate, and it’s a long way from clear as to exactly how the bank will handle that.

The RBNZ whipped up a flurry of excitement in Kiwi exchange rates back in May when for the first time since the onset of the pandemic it presented the market with assumptions about future interest rates, with these including the notion that New Zealand’s 0.25% official cash rate would be lifted to 0.5% around the third-quarter of next year. 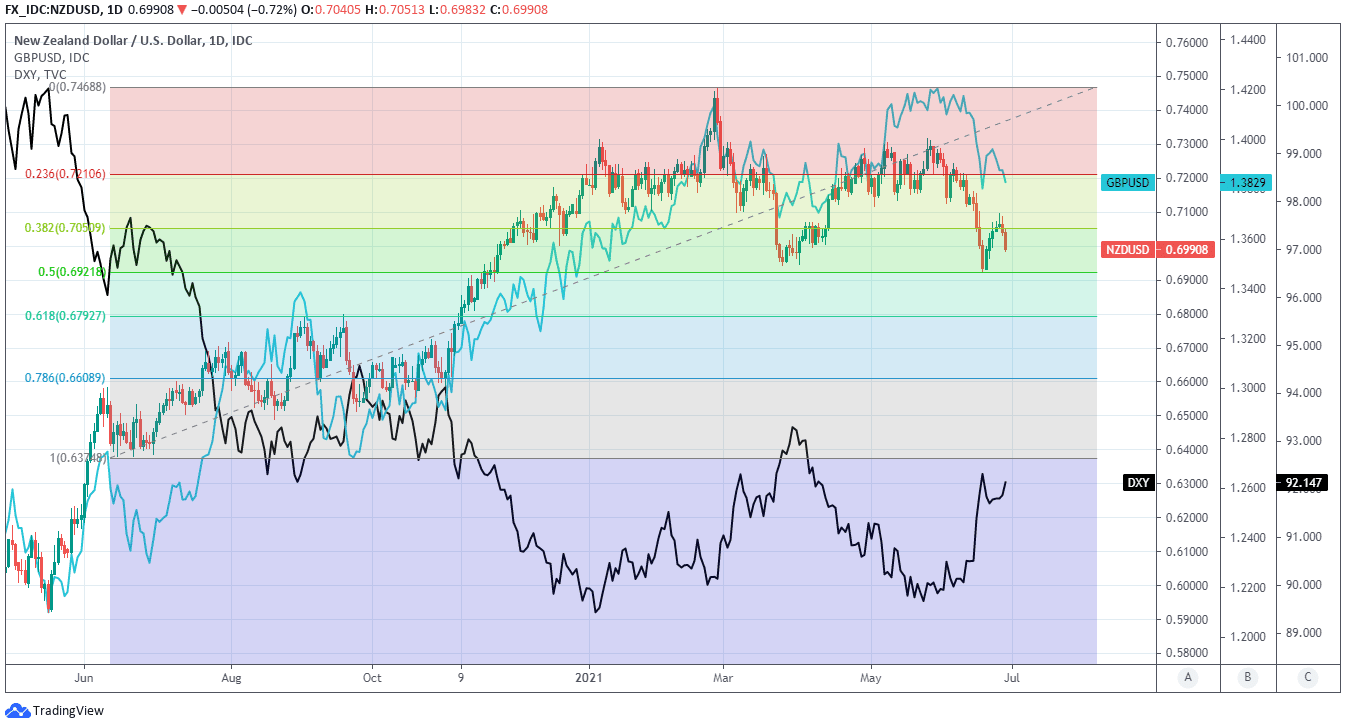 Above: NZD/USD shown at daily intervals alongside GBP/USD and U.S. Dollar Index.

"Economic activity in New Zealand is returning to its pre-COVID-19 levels," says RBNZ Governor Adrian Orrr, in a speech to the Mindful Money Awards in Auckland on Tuesday. "However, divergences in economic activity, both within and between countries, remain significant. The sustainability of the global economic recovery remains dependent on the containment of COVID-19.”

Financial markets have gone further than the RBNZ in recent weeks and now anticipate that the bank will lift borrowing costs as soon as February next year, and that New Zealand’s cash rate will likely return to its pre-pandemic 0.75% by the end of 2023.

This current level of interest rate expectations is potentially enhancing the risk of a market disappointment in July, and one which would be negative for the Kiwi Dollar and supportive of the Pound-to-New Zealand Dollar rate.

In some ways the Kiwi might have less left to gain if the RBNZ does eventually cast itself as at ease with the above market expectations, than it would likely have to lose in the event that the bank follows in the footsteps of the BoE by giving short-shrift to the market’s ideas.

The latter could eventually mean that Croy and the ANZ team were right to say there’s a reduced chance of 1.96 level in GBP/NZD giving out at all, although much depends on the July RBNZ decision and what the market makes of the Kiwi Dollar in the meantime.

“Market expectations for the RBNZ have continued to move on the hawkish side, with the OIS market now pricing in a the first hike already in early 2022 (the RBNZ signalled no change until 2H22), starting to set the bar quite high for another hawkish surprise at the 15 July RBNZ meeting,” says Francesco Pesole, a strategist at ING.

“The Kiwi dollar was the best performing currency for most of this past week, leading the recovery in commodity FX and significantly trimming the post-FOMC losses. Indeed, fundamentals continue to make NZD a very attractive buy-the-dip opportunity, thanks to one of the most hawkish central banks in G10 and now also a much more balanced positioning,” Pesole adds.