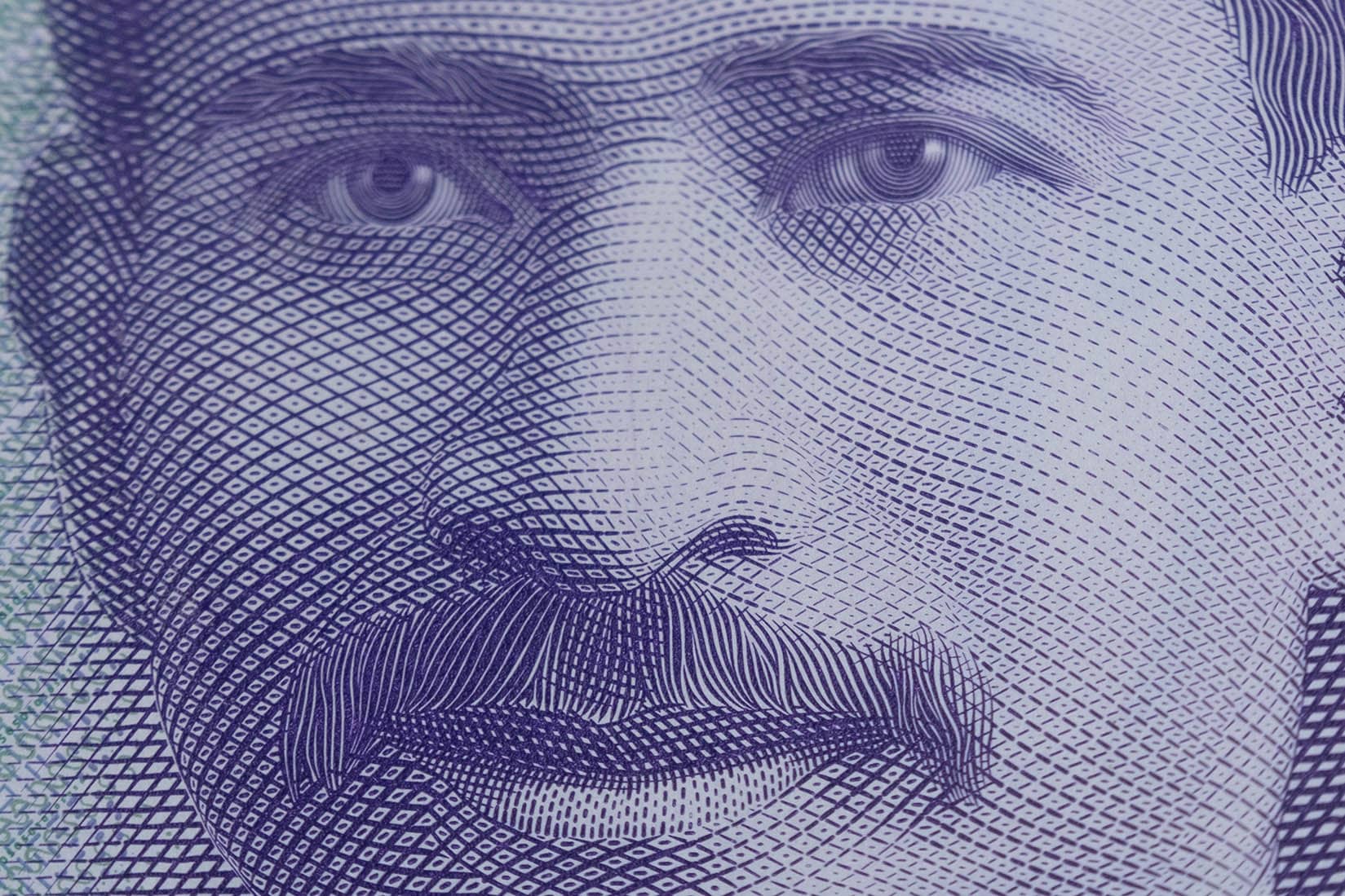 The New Zealand Dollar was out in front of all other major counterparts ahead of the weekend but notched up its strongest gain over a paling Pound, which was underperforming even the U.S. Dollar despite the latter itself doubling over in the final session of the week.

New Zealand’s Dollar topped the major currency board on Friday and was potentially aided in its tentative outperformance by an earlier lag which left it with greater scope for a catch up ahead of the weekend, although by far the more obvious driver of price action was a doubling over of the U.S. Dollar.

The greenback saw losses against all currencies other than the Pound on Friday, adding to the week’s earlier declines which have together seen U.S. exchange rates handing back almost half of the gains made before and after June’s Federal Reserve (Fed) monetary policy decision last week.

“The Kiwi continues to inch higher, and while it was the USD that did most of the moving, the NZD has also outperformed on most crosses as other currencies benefit by less. Going forward we still expect the NZD/USD to gradually strengthen, but we have lowered our NZD forecasts a touch, and now expect it to reach 0.72 by the end of Q3, 0.74 by the end of Q4 and to level out at 0.75 over 2022,” says David Croy, a strategist at ANZ.

“NZD/GBP remains in a multi-week downtrend; support at 0.50 is solid,“ Croy says.

The Pound-to-New Zealand Dollar rate was trading back beneath 1.97 having fallen from highs around 1.9950 earlier in the week, which saw NZD/GBP trading above 0.5075 having lifted off from its low near 0.5012 around the mid-week session. 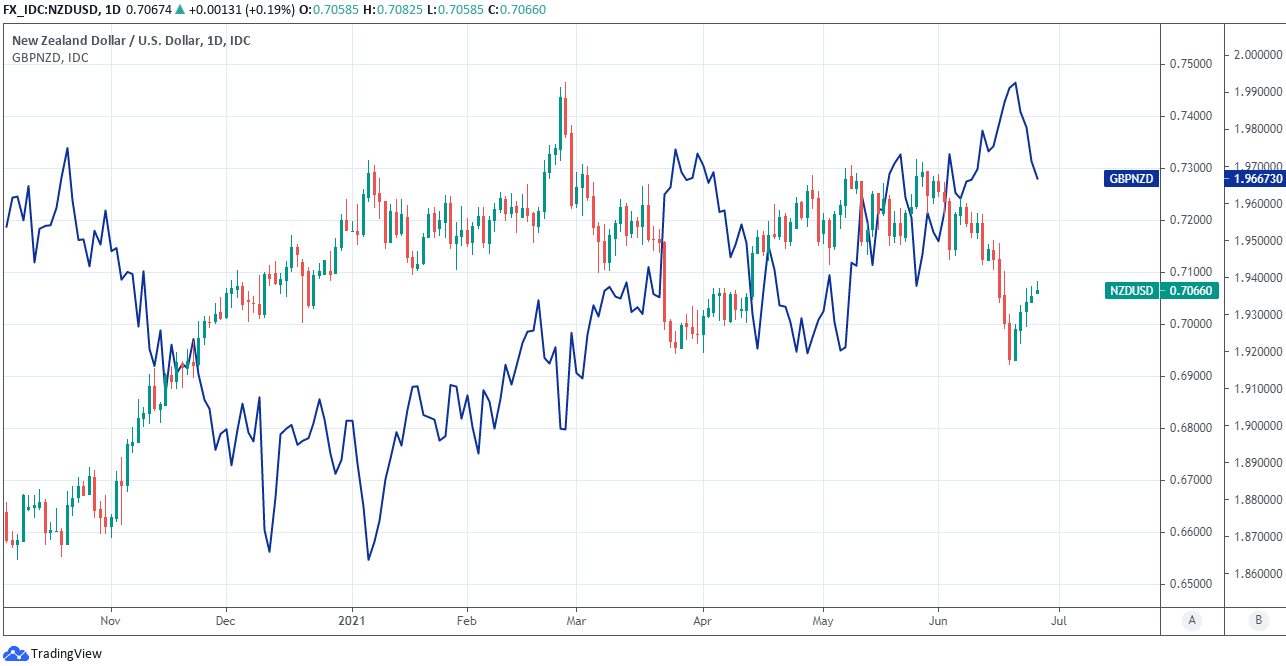 Sterling was underperforming on Friday, explaining at least half of the decline in GBP/NZD, after the Bank of England (BoE) gave a balanced assessment of the UK economy’s performance and prospects but said that it wants to use monetary policy in order to “lean against” downside risks to the outlook.

That’s not too dissimilar in its market effect to leaning against strength in Sterling exchange rates, which vindicates Croy and the ANZ team for long having said that GBP/NZD is likely to find the two-for-one or 2.0 level acting as a solid, if-not impenetrable resistance in the months ahead.

This would be even more the case if the main Kiwi exchange rate NZD/USD edges higher over the coming weeks and months, as is envisaged by ANZ, given that the latter is alongside GBP/USD one of the two most significant drivers of GBP/NZD.

“In NZDUSD, we are more inclined to view the recent dip to around 0.6925 as a possible near-term range bottom, with the 0.7215 average of the mid-April to mid-June period as a likely top end of the range,” says Alvise Marino, a director of FX strategy at Credit Suisse.

Marino and the Credit Suisse team cite the Kiwi economy, which has surprised on the upside of both market expectations and Reserve Bank of New Zealand (RBNZ) forecasts lately, as the main driver of their forecast for NZD/USD to trade within the above referenced range over the coming months.

New Zealand’s economy grew at a quarterly pace of 1.6% in the three months to the end of March, faster than the 0.5% average anticipated by many economists and a far better performance than the -0.6% construction assumed by RBNZ forecasts.

“Markets have consequently priced in a more aggressive policy rate outlook for the RBNZ, with the first rate hike pencilled in by Q1 2022, and an increasingly wide policy divergence vs the RBA, peaking around mid-2023 (Figure 13). The hawkish shift in the RBNZ’s own latest policy rate forecasts in late May (with the first hike pencilled in for H2 2022) has certainly contributed to this priced-in outlook was expected,” Marino says.

RBNZ policymakers have since May been assuming in their economic forecasts that New Zealand’s cash rate will be lifted from its current record low level of 0.25% some time in the second half of next year, prompting financial markets to price-in a lift-off decision even sooner than that, while some analysts have suggested the bank could raise borrowing costs as soon as the first quarter next year.

This is all highly supportive of the New Zealand Dollar, although by far the biggest driver of all currencies of late has been the U.S. Dollar, which has given back early June gains after Federal Reserve (Fed) Chairman Jerome Powell and other U.S. rate setters used an address to Congress this week and series of other engagements to make clear to investors that the outlook for American interest rates is far from a foregone conclusion.

“Without the seeming certainty of a “delinquent” Fed as a tailwind, markets will need to be much more cautious when it comes to picking FX winners and losers,” Credit Suisse’s Marino warns. “At the same time, the arguments for a broad-based, persistent USD rally along the lines of what was seen in Q1 2021 are not yet compelling.” 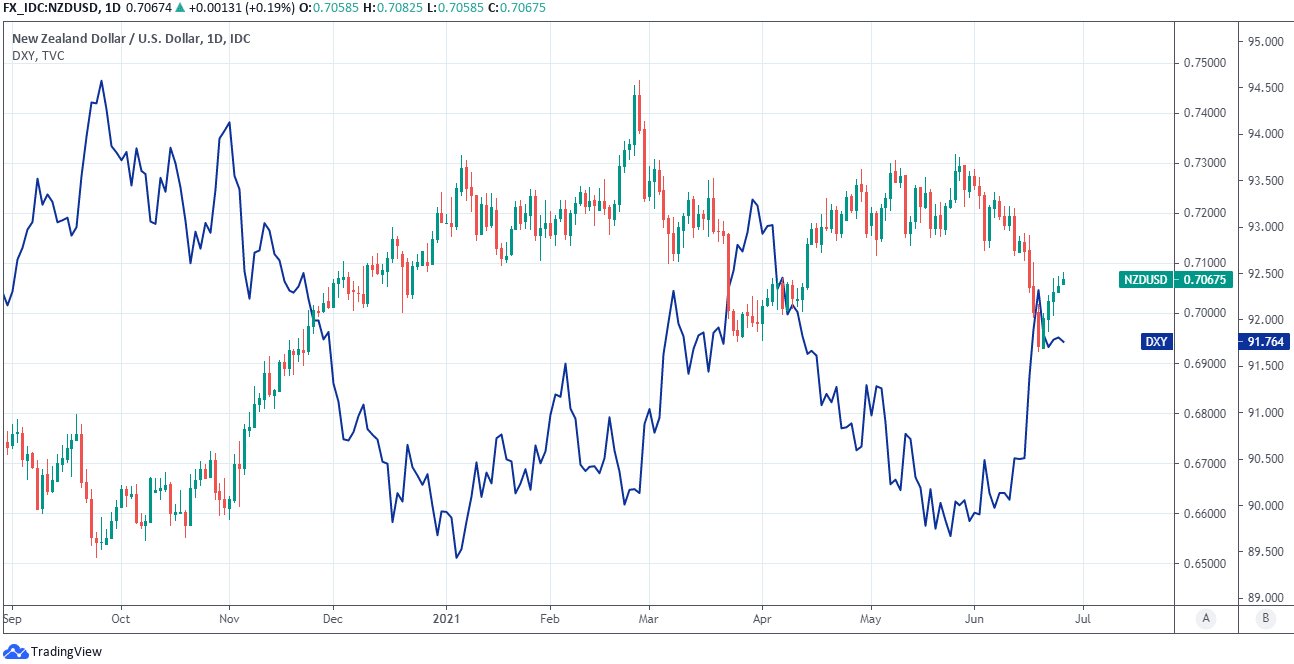 Above: NZD/USD shown at daily intervals alongside U.S. Dollar Index.