- GBP/NZD inching higher but oxygen thins near 1.98
- As NZD/USD closes in on lows ahead of NZ GDP data
- Could offer NZD domestic tailwind, lean on GBP/NZD
- Fed-induced USD slippage is a headwind for GBP/NZD

While quoted a little over 1.9750 on Tuesday, downside risks would abound for the Pound-to-New Zealand rate once up to or above the nearby 1.98 handle, even more so in light of recent and ongoing declines in the main Kiwi exchange rate NZD/USD.

New Zealand’s Dollar has closed in on the 0.71 handle this week, a level around which it benefits from multiple technical supports derived from Fibonacci retracements of the multiple extensions to the upside undergone by NZD/USD in the year to June 2021.

From there NZD/USD, which is one of two component drivers of GBP/NZD, could struggle to decline further without a possibly unlikely adverse domestic catalyst but would possibly have greater upside potential than GBP/USD if and when a recovering U.S. Dollar runs out of steam.

The net effect and implication of this is that the Pound-to-New Zealand Dollar could now be nearing the end of its Northbound road, if not susceptible to a correction lower over the coming days.

“Across the Tasman, the REINZ May housing report showed that prices rose once again, though the volume of house sales is coming off its record highs,” says Tim Riddell, a London-based macro strategist at Westpac. 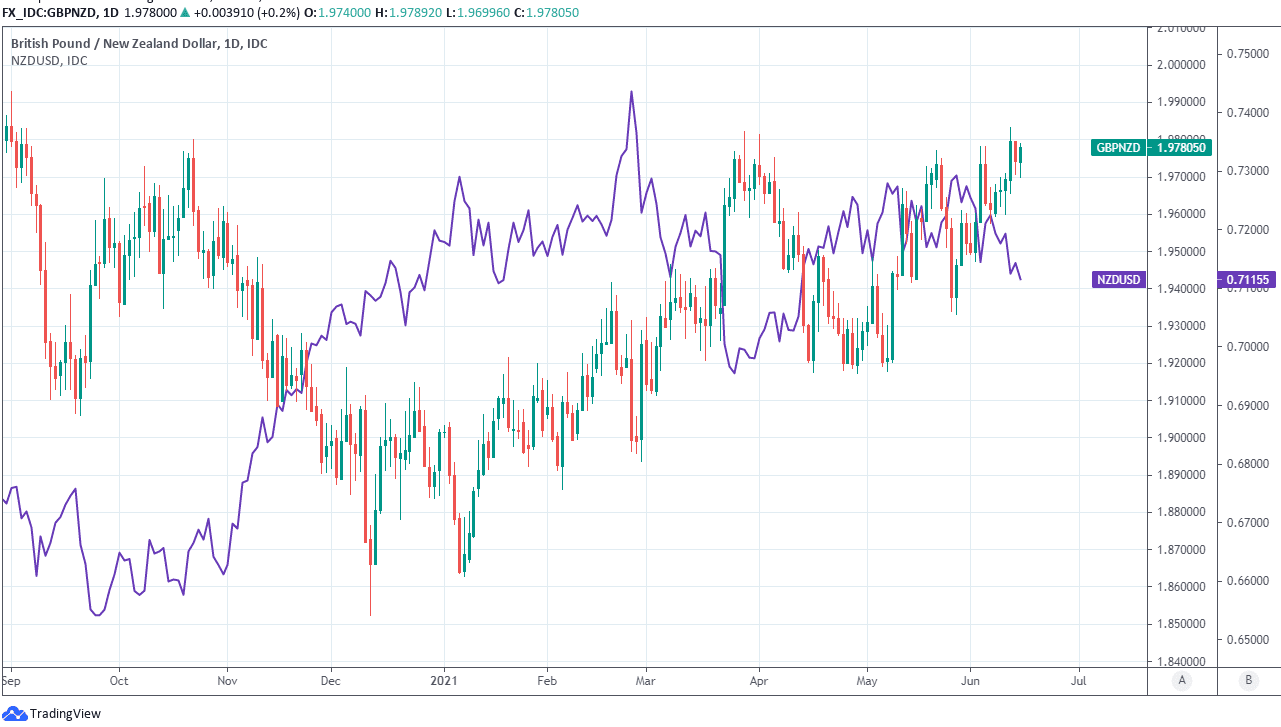 Above: Pound-to-New Zealand Dollar rate at daily intervals with NZD/USD.

“In UK hours, the trade agreement with Australia, UK’s first post-Brexit deal struck from scratch as opposed to being grounded from existing EU based agreements, was confirmed by AU Trade Minister Tehan and with Morrison also praising it,” Westpac’s Riddell adds.

For its part the NZD/USD rate has come under pressure this week even after the Real Estate Institute of New Zealand (REINZ) said that domestic house prices continued to rise last month, with real estate values in Auckland reaching new record highs, despite a March effort by the government in Wellington to curb house price growth.

However, New Zealand’s first-quarter GDP report is due out at 23:45 London time Wednesday night London time and the bar for an upside surprise is arguably relatively low, and so the report is something that could potentially lift the Kiwi and weigh on GBP/NZD mid-week.

This is in large part because New Zealand’s economy posted a surprise contraction in the final quarter of 2020 despite having been mostly free from coronavirus-related restrictions after the government there contained the disease far earlier than peers, which means the first quarter GDP number could benefit from a statistical tailwind as well as any organic recovery of the economy.

“In our view, NZD/USD has plenty of room to edge higher because the cross is undervalued relative to the level implied by WMP prices,” says Elias Haddad, a senior FX strategist at Commonwealth Bank of Australia.

That would be a downside risk for GBP/NZD however and before then, UK inflation data is due out in the early hours of Wednesday’s London trading session and could itself prove supportive of Sterling in the event that the consumer price index continues to close the gap between its pandemic-inspired lows from last year and the 2% target of the Bank of England (BoE).

“Attention is turning back to inflation ahead of the Fed this week – the implication being that they may need to act, which could be a short-term headwind for the NZD. But at least the NZD remains within well-established ranges, for now,” says David Croy, a strategist at ANZ.

In the intermittent period all eyes across the currency market will turn to the Federal Reserve (Fed), which announces its latest monetary policy decision at 19:00 on Wednesday and will be sure to have impact on currencies one way or the other, though it is more of a downside risk for GBP/NZD given current and enduring lows in NZD/USD.

This week’s Kiwi and Sterling price action has played out amid a widespread bounce in U.S. exchange rates which itself comes ahead of Wednesday’s all-important Fed event, though this and analyst expectations of a possible change in guidance about the future of the bank’s $120bn quantitative easing programme could mean the U.S. Dollar risk is also on the downside for the latter half of the week.

The week will come to an end in domestic terms for Sterling with the UK’s May retail sales report which consensus suggests should reveal that April’s barnstorming 9.2% gain in spending was followed by another albeit lesser increase of 1.5% that would go some way toward vindicating bullish forecasts for the UK economy this year. 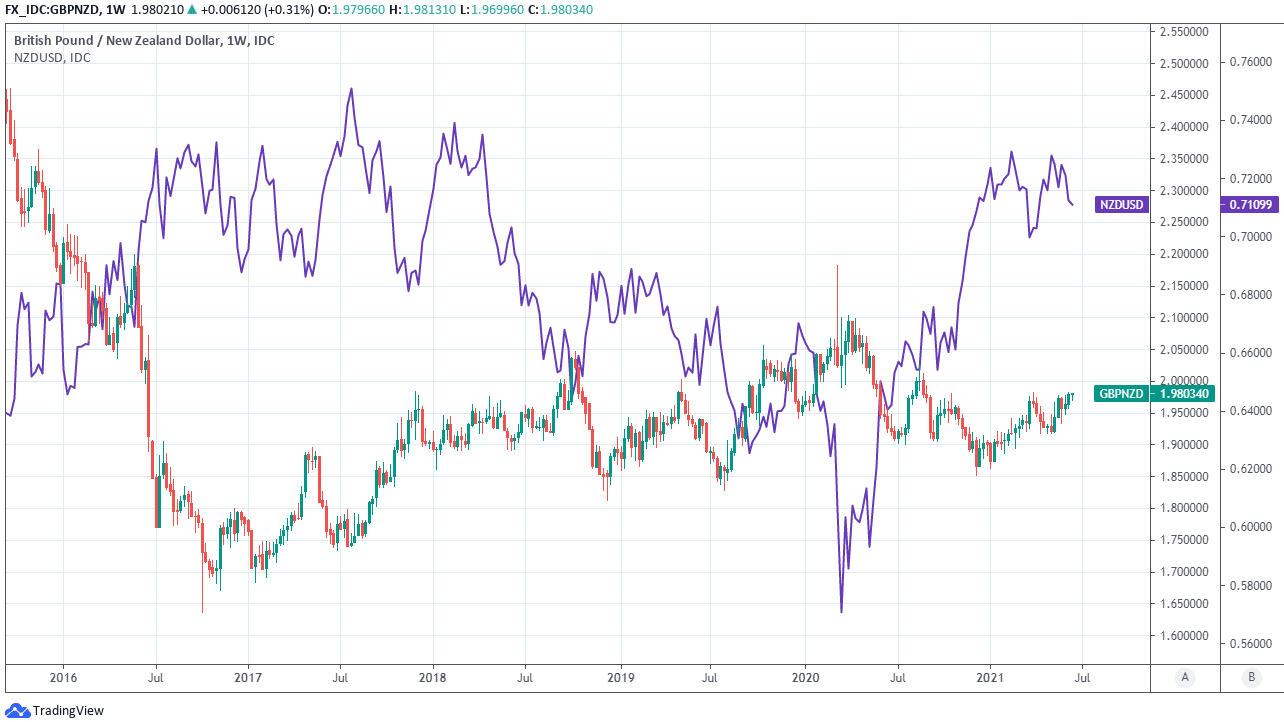 Above: Pound-to-New Zealand Dollar rate at weekly intervals with NZD/USD.

The Reserve Bank of New Zealand is unlikely to raise interest rates in 2021 according to a major investment bank, creating the potential for a readjustment lower in the New Zealand Dollar.

The Pound-to-New Zealand Dollar rate remains supported above 1.96 amid an ongoing advance by the U.S. Dollar, which could lift Sterling back to 2.00 if it continues weighing heavier on the Kiwi, although market optimism about the outlook for Reserve Bank of New Zealand (RBNZ) interest rate policy may see GBP/NZD struggling to extend beyond there.

New Zealand Dollar Has Another Ace Card for 2022

The New Zealand Dollar succumbed to resurgent U.S. exchange rates in the penultimate session of the week, reversing its earlier gains and lifting GBP/NZD from its Wednesday lows, although the Kiwi currency has another ace card that could burden the greenback and Sterling next year.

The New Zealand Dollar tore higher against the Pound, Euro, Dollar and the majority of the world's freely-traded currencies following an unexpected decision by the Reserve Bank of New Zealand.