The New Zealand Dollar can continue to rise owing to May's surprising shift in stance at the Reserve Bank of New Zealand according to Wall Street investment bank JP Morgan, but the FX research team at Barclays tell their clients they are expecting weakness in the currency over coming days.

The Reserve Bank of New Zealand (RBNZ) surprised investors last week by flipping from an easing bias to forecasting hikes in 2022, an outcome that prompted a spike in demand for Kiwi Dollars and left some analysts prediction further gains can come.

The RBNZ said it would continue to provide generous support to the economy but said an improvement in global and domestic economic indicators, such as New Zealand’s terms of trade, have provided them with more confidence in the outlook.

Projections issued by the RBNZ in their May Monetary Policy Statement noted that interest rates at the RBNZ (the OCR) would need to start rising in 2022.

"This is a particularly abrupt turn, and with the notable exception of the BoE, other DM central banks are likely to remain committed to maintaining rates on hold next year, interpreting the current growth and inflation surge as transitory," says Bruce Kasman, Chief economist and head of global economic research at JPMorgan Chase & Co. 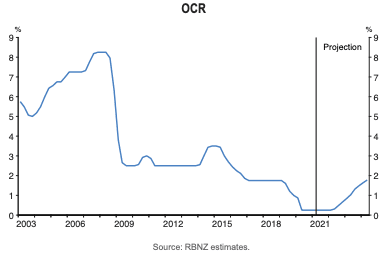 And foreign exhcange strategists at the Wall Street lender and investment bank say further upside in the New Zealand Dollar is likely given the scale of shift in expectations at the RBNZ.

Paul Meggyesi, Head of FX Research at JP Morgan Securities says the RBNZ’s metamorphosis from dove to hawk, prompted a pop in New Zealand Dollar exchange rates and prompted his team to upgrade their forecasts for the currency by 4%.

On the back of the forecast upgrades JP Morgan strategists "initiate NZD longs this week", underscoring their confidence in a higher NZ Dollar profile.

Underpinning this confidence is the identification of a thematic shift for currency markets, one whereby central bank policy is coming to the fore as a driver of direction.

The foreign exchange playbook suggests that when a central bank becomes more 'hawkish' than its peers - i.e. is leaning towards raising rates or ending quantitative easing - then the currency it issues appreciates in value.

"As the list of hawkish central banks grows, dovish outliers remain: the ECB, and the BoJ especially, continue to trail the pack, tempering our enthusiasm for sustained EUR outperformance," says Meggyesi.

If the RBNZ hikes in 2022 Meggyesi says it will be moving before most Developed Market central banks, reminiscent of the 'lonely' hiking cycle delivered in 2014 which sent NZD/USD to nearly 0.90.

JP Morgan says one common support factor between 2014 and now are supportive dairy prices, which have surged 30% over the last six months.

"The accumulated lift from that channel is worth around 3c," says Meggyesi.

"The RBNZ has clearly shifted gears, and our new forecasts imply further downside in AUD/NZD down to 1.03," he adds.

But the short-term direction of the New Zealand Dollar is not necessarily one that aligns with the bullish sentiment of the JP Morgan upgrade, according to another analyst we follow.

Marek Raczko, an economist at Barclays, says he expects the New Zealand Dollar to be weaker in the near-term, saying the market might have overreacted to the policy decision.

"We expect the NZD to weaken and underperform after its sharp rally and outperformance last week," says Raczko in a weekly foreign exchange briefing.

The Barclays analyst cites governor Adrian Orr's assessment in the press briefing that their expectations for a higher OCR in 2022 does not constitute forward guidance, but are highly conditional projections.

Indeed, in the MPS the RBNZ were eager to stress "this projection is conditional," emphasising the final work.

"We think the market has overreacted to the OCR path and view the current normalization implied by RBNZ OIS/NZD IRS as being premature and aggressive," says Raczko.