Pound Sterling was a touch lower against the Kiwi and other commodity currencies in the mid-week session with the New Zealand Dollar pulling ahead of all of its nearest rivals after first-quarter unemployment numbers surprised on the upside.

Employment growth of 0.6% last quarter came out twice as strong as economists had anticipated and was responsible for pulling the jobless rate lower from 4.9% to 4.7% in a 20 basis point decline that surprised the market.

The Pound-to-New Zealand Dollar rate was back below the 1.94 after being lifted close to 1.95 in a volatile opening to the week, a level it could be likely to see again over the coming days if there are further bouts of U.S. Dollar strength or if the BoE gives Sterling reason for homegrown cheer at 12:00 on Thursday.

“Even if our baseline forecast is for no near term rate hikes, we expect the market will start pricing in some probability that hikes could happen sooner than expected,” says John Briggs, global head of strategy at Natwest Markets.

Thursday’s update provides the BoE with its first opportunity to update the market on its outlook for UK growth and inflation since restrictions on activity began to be eased in early April, marking the beginning of a reopening process which is expected to drive a sharp economic recovery through summer. 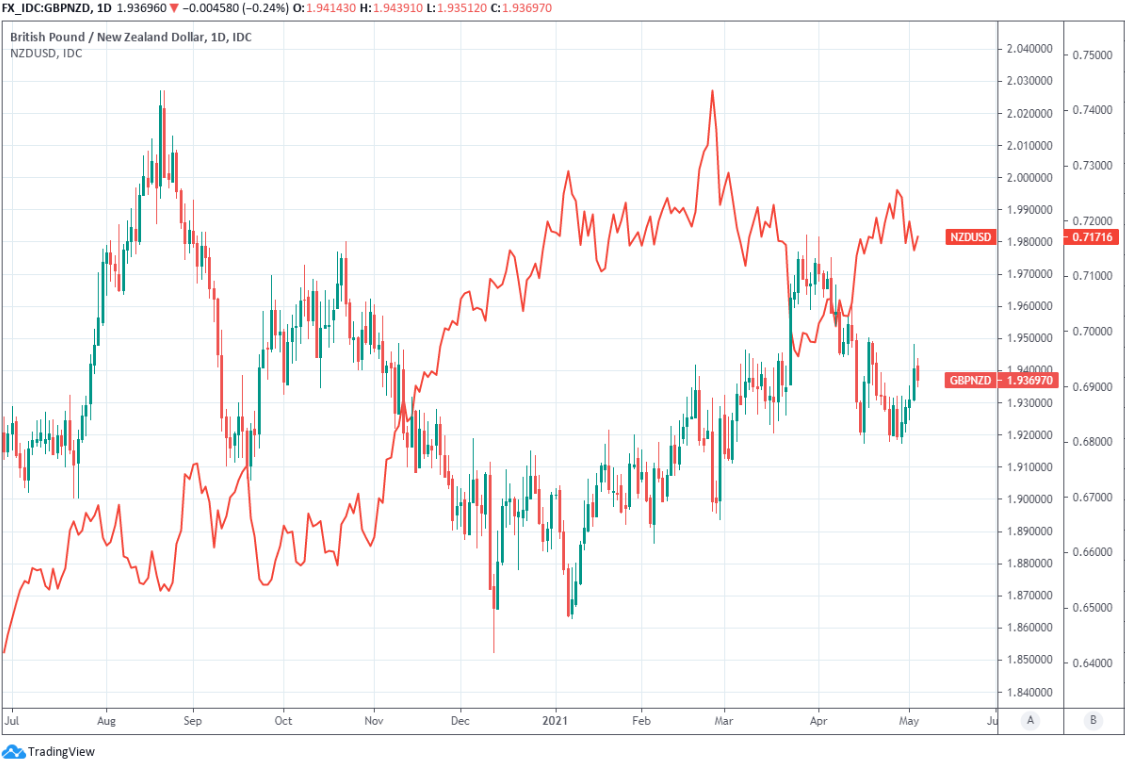 Above: GBP/NZD shown at daily intervals alongside NZD/USD.

“Despite improving economic conditions, subdued inflation since the start of the year as well as an absence of serious near-term inflation pressures will underpin a continued dovish policy bias,” says Kallum Pickering, an economist at Berenberg.

Pound Sterling enters the meeting with financial markets anticipating that the Bank of England will be one of the slower central banks to lift interest rates over the coming years, with pricing in the overnight index swap market placing it only marginally ahead of the European Central Bank (ECB).

This however is a perilous assumption for investors to be making and any revision of it would be likely to lift the Pound against other currencies including the New Zealand Dollar this week if the BoE’s new quarterly forecasts or statements in relation to the interest rate outlook lead investors to doubt themselves.

“Investors will focus on the extent to which the GDP projections are revised up. Given the positive data flow, we expect the MPC to raise their 2021 growth forecast significantly, leaving it above consensus expectations but likely lower than our anticipated 7.8%,” says Sven Jari Stehn, chief European economist at Goldman Sachs.

The UK economy has had less trouble than others in recent years generating inflation, which is why the Bank of England (BoE) lifted interest rates in November 2017 and August 2018 at a point when the Federal Reserve (Fed) was the only other central bank entertaining tighter monetary policy.

Meanwhile, BoE policymakers have indicated several times this year that their attention is now turning toward upside risks to the 2% inflation target at the other end of the Bank’s forecast horizon, which envisaged a consumer price inflation rate of around 2% in both 2022 and 2023 at the last forecast round in February. 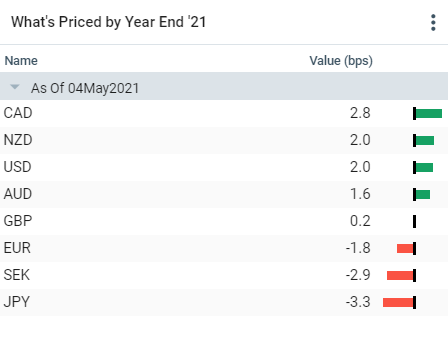 Upside risks to the inflation outlook would be communicated this week through the BoE’s latest official forecasts, which are among the things that could be most likely to surprise the market, especially if economists are right to anticipate substantial upgrades to the bank’s projections for GDP growth this year.

At the last update the BoE noted that HM Treasury’s support for firms and households had been larger than anticipated before also recognising the supportive impact that American fiscal stimulus would likely have on the global economic outlook, which is why economists expect upgrades to its growth forecasts.

“We look for the BoE May rate decision and Monetary Policy Report on Thursday to confirm the 1.37/1.41 range in GBPUSD, rather than yield a convincing break of either level. The revised 2021 GDP & CPI inflation forecasts are unlikely to be perceived by FX investors as "GBP-negative,” says Stephen Gallo, European head of FX strategy at BMO Capital Markets.

Stronger projections of GDP growth and inflation could be enough on their own to have investors second guessing their earlier assumptions about the outlook for the BoE’s 0.10% Bank Rate, which would be supportive of Sterling and GBP/NZD, although if these factors were supplemented by a decision to formally set out the timescale for slowing or otherwise ending the bank’s crisis-inspired quantitative easing programme the bank might then bolster Sterling’s appeal.

Subject to price action in NZD/USD on the day, the Pound-to-New Zealand Dollar rate would rise back above 1.94 and potentially attempt to explore the area above 1.95 if Thursday’s policy event is able to lift the main Sterling exchange GBP/USD back toward the top of the 1.37-to-1.41 range referenced by BMO’s Gallo.

However, and with the Kiwi economy giving the UK and others a run for their money in the recovery race the New Zealand Dollar’s strength and resilience could be likely to act as a headwind for Sterling which ultimately serves to limit the upside in GBP/NZD over the coming weeks and months.

"We’ve been a little gun-shy as the NZD hasn’t shown any progress since the late February high, but our projections for a stronger NZD through the rest of the year remain intact. We see global macro conditions supporting that view and more so given the recent dataflow," says Ray Attrill, head of FX strategy at NAB.