There is little in the technical charts, nor the fundamental calendar, that would argue against an ongoing short-term trend of weakness in this exchange rate.

The declines in GBP/NZD come amidst a broad-based period of weakness in Sterling exchange rates with the UK currency being one of the biggest losers in the major FX space during the course of the past month.

It appears the strong supportive winds that lifted the Pound in the first three months of the year have lost strength over recent weeks, leading to some 'position squaring' in the market that involved selling the UK currency by market participants that had bet heavily on the currency. 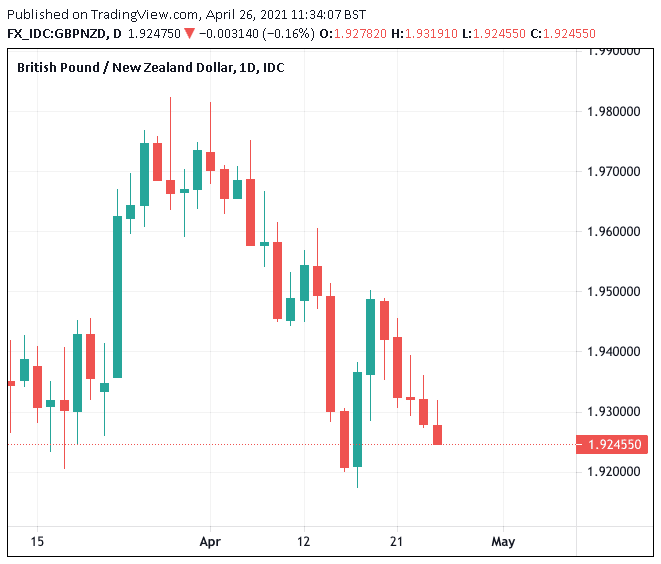 Above: GBP/NZD since the March highs.

The New Zealand Dollar has meanwhile appreciated sharply against the U.S. Dollar over the course of April, amidst an ongoing support for the 'commodity dollar' complex, of which the Kiwi is included.

In a monthly briefing, researchers at the lender say the NZ Dollar is "back on track with our positive outlook".

The New Zealand Dollar suffered a setback in March when the government of New Zealand issued new legislation to calm the country's hot housing market, easing pressure on the Reserve Bank of New Zealand (RBNZ) to raise interest rates.

But, BNZ view the currency's reaction as a "short-term hiccup" that defied the fundamentals that underpin the currency.

The government's new housing policies, designed to reduce investor demand, also coincided with a rally in the U.S. Dollar and Sterling.

"As expected, both of those factors have faded, seeing the NZD back on track with our positive outlook," says Jason Wong, Senior Markets Strategist at BNZ.

Wong says he and his team have steadfastly remained positive about the NZ Dollar outlook this year, putting more weight on the positive dynamic arising from global reflationary forces than domestic forces.

The latter has in his view tended to be a fairly weak driver, particularly when they pertain to government policy tweaks.

"The key risk to our view is the global economic recovery being derailed by the pandemic spiralling out of control but, if anything, the global growth outlook has improved so far this year as the vaccination programme proceeds," says Wong.