The British Pound has retreated further away from the late-March / early-April highs against the New Zealand Dollar, a move exacerbated by a particularly sizeable half a percent decline on Tuesday April 07, however a number of analysts we follow maintain a view the Kiwi will remain under pressure in the near-term.

The Pound-to-New Zealand Dollar exchange rate (GBP/NZD) has retreated back to 1.9565 where we find it at publication, having been as high as 1.9823 on March 29, but we are told by a number of analysts that for now dips will be relatively shallow.

Foreign exchange strategists at ANZ say the New Zealand Dollar is still likely to stay under pressure against the Pound and they say the GBP/NZD uptrend is not at risk of breaking down.

In a regular briefing ANZ tell clients GBP/NZD's recent successful hold of support located at 1.96 "is a bad sign technically" for the New Zealand Dollar's ability to regain control.

ANZ see resistance in GBP/NZD located up at 1.98 first and then 2.0, weakness in the exchange rate meanwhcile could find buying support at 1.8975 and then 1.96. 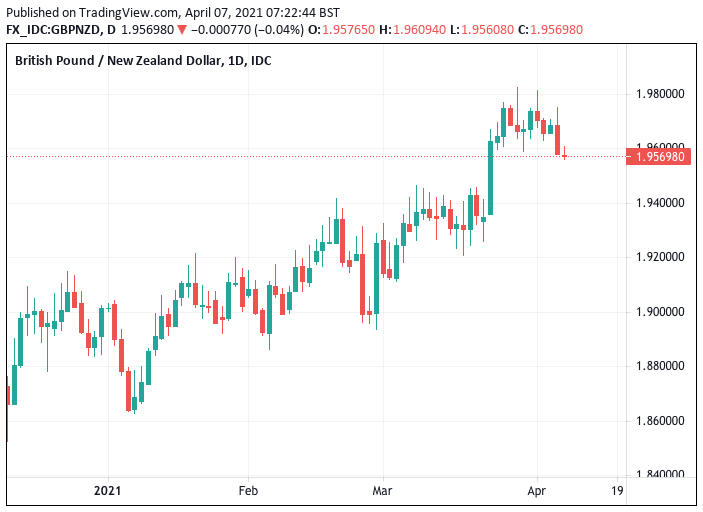 Straights at Citi, the world's largest prime broker of foreign exchange, meanwhile say in weekly briefing note that they retain a bearish slant on the NZ Dollar.

"We are tactically bearish NZD given the surmounting worries around the housing market that inevitably led the government to announce new measures to curve house prices and dissuade property investors from ramping up the prices any further," says Ebrahim Rahbari, analyst at Citi.

The market reassessed its view of the New Zealand Dollar on March 23 when the New Zealand government announced a series of measures to cool the housing market, meaning the pressure on the Reserve Bank of New Zealand (RBNZ) to raise rates had diminished.

The market's rapidly repriced the need for an interest rate hike at the RBNZ by pushing back the date of the expected first hike, which was in turn met with corresponding NZ Dollar weakness.

Despite developments concerning the property market ING tell clients they are not convinced the New Zealand Dollar is on the brink of a wholesale decline, saying they see "limited downside risks for NZD at this stage".

ING says the repricing of expectations on the timing of the next RBNZ rate rise cannot drop further, meanwhile the short-term undervaluation vs. the U.S. Dollar is still material (around 2.9%).

Furthermore ING says the positioning is no longer overstretched to the upside.

"On this last point, the latest CFTC data showed that NZD net-longs had dropped even further in the week ending 23 March, suggesting much more contained room for a further long-squeeze in the currency," says Pesole.