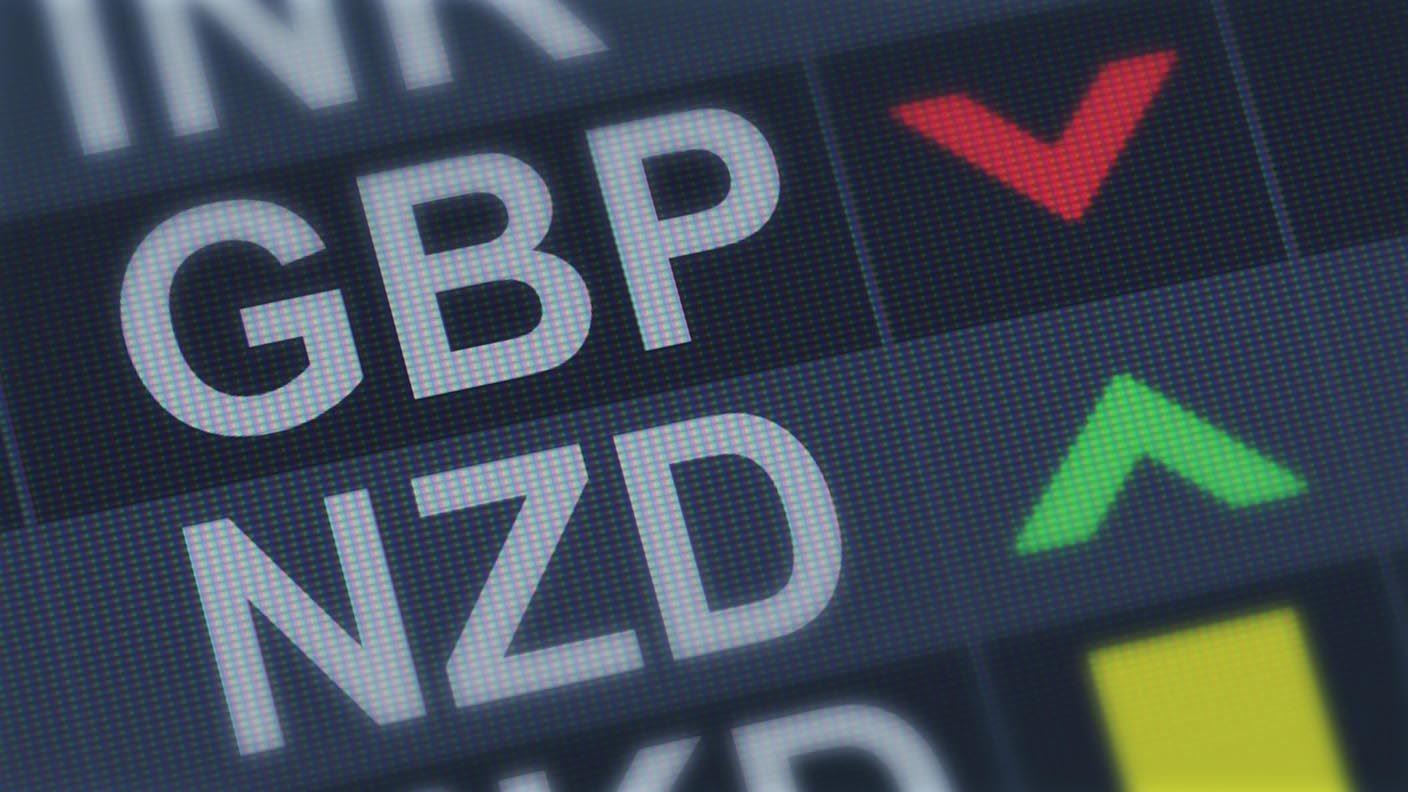 The New Zealand Dollar neared the bottom of the major currency barrel on Wednesday and was risking a fall to its lowest level for 2021 as GBP/NZD rose ahead of the March Federal Reserve (Fed) policy decision and release of Kiwi GDP data, while some analysts warned of volatile trading ahead.

New Zealand's Dollar rose against only its Australian relative in the major currency space during the mid-week session, making the Pound-to-New Zealand Dollar rate one of Sterling's biggest risers ahead of the latest Fed decision and in advance of final quarter GDP from New Zealand.

"Volatility could be high today," says Elias Haddad, a senior FX strategist at Commonwealth Bank of Australia. "Our ASB colleagues estimate GDP contracted by 0.1%/qtr compared to the market consensus of a 0.2%/qtr lift. Nevertheless, New Zealand’s economy will still be larger than it was in Q4 19, even after a 0.1% contraction in economic growth in Q4 20. Our ASB colleagues expect the RBNZ to start raising interest rates from August 2022.  The RBNZ’s ‘early’ policy normalisation will support NZD."

GDP data is due out at 21:45 London time and economist are looking on average to see a 0.2% increase following on from the 14% quarterly rebound seen in the three months to the end of September, which covered a period in which parts of the economy were blighted by a second 'lockdown' in Auckland.

Treasury and Statistics New Zealand have already indicated the economy ended 2020 larger than it was upon entry into it, meaning New Zealand likely recovered all of its coronavirus-inspired losses before year-end. 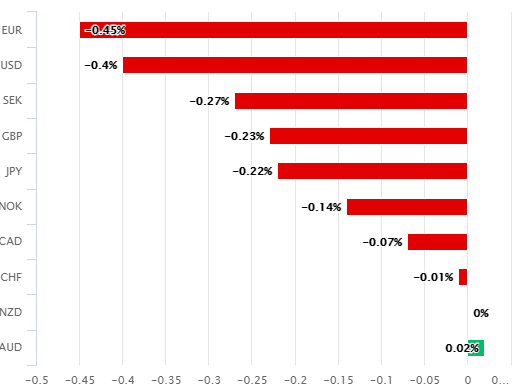 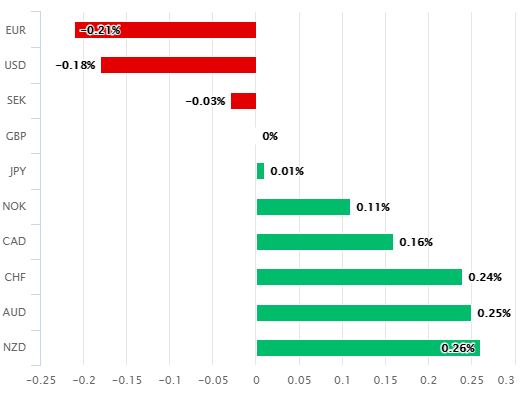 Confirmation of the latter might enable investors to look past any disappointment over the final-quarter growth rate and support the Kiwi Dollar by leaving intact what are tentative  analyst expectations the Reserve Bank of New Zealand (RBNZ) could look to raise its own cash rate as early as 2022.

But much depends on the stance adopted by the Fed before then and market's reading of the bank's latest economic projections, which are due out at 18:00 on Wednesday and with the U.S. Dollar aside, would have consequences first and foremost for the antipodean currencies and Europe's unified unit.

"The uptick in long-tenor interest rates is somewhat of a global phenomenon, although it seems to be US-led," says Greg Anderson, global head of FX strategy at BMO Capital Markets. "The yield spike has caused central banks such as the ECB, RBA and RBNZ to express discontent and to either alter their bond purchase programs or declare an intent to do so. Given the actions of those central banks, whether the Fed chooses to follow suit will be critical for EURUSD, AUDUSD and NZDUSD. We'd also point to USDMXN and USDBRL."

Many central banks have threatened or even taken action to prevent rising U.S. bond yields from lifting domestic borrowing costs for their own economies including the RBNZ, which may have played a role in keeping the New Zealand Dollar suppressed through much of the current month.

10-year U.S. government yields rose above 1.66%, the highest level seen during pandemic times ahead of the Fed decision on Wednesday, in the process offering investors improved returns that could have played a role in lifting the U.S. Dollar on the day as well as previously. 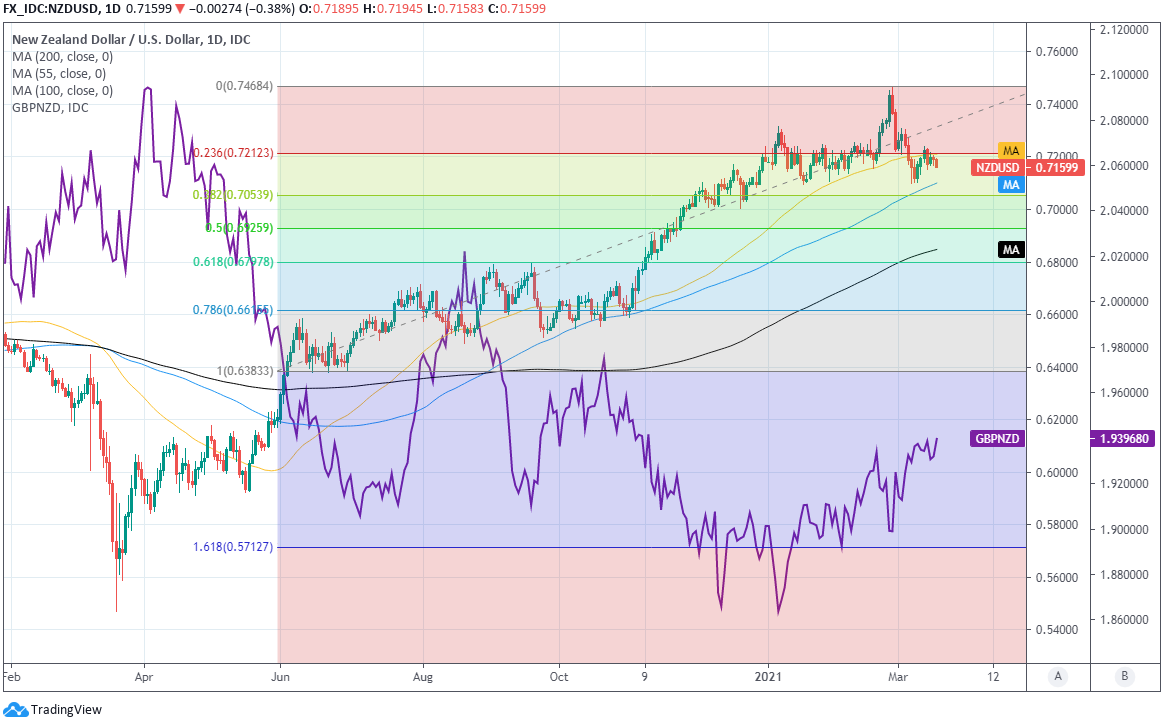 Above: NZD/USD and GBP/NZD (purple) with key NZD moving-averages and Fibonacci retracements of summer 2020 rally.

Investors will be looking to assess the degree to which the Fed is comfortable with higher yields and what the risks are of it taking action if they rise too far. Yields are higher at least in part because of  'hawkish' market expectations that it could raise interest rates as soon as next year, and end its $120bn per month quantitative easing programme even earlier than that.

"The focus is on both the new GDP forecasts (we expect a big bump in the 2021 estimate) and the dot plots, which could show lift-off (in the policy rate) in 2023. Next cab off the rank is NZ GDP – which will be harder to pick after the stellar rebound in Q3. Whatever the detail, it will confirm that NZ had a much better 2020 than most, and that is likely to be the vibe in markets, helping stabilise the NZD even if the USD bounces," says David Croy, a strategist at ANZ. "NZD/GBP appears to be readying itself for a move lower after what looks like a failed attempt at a technical break higher."

Bond yields move in the opposite direction of prices so rising yields reflect bonds being sold and vice versa. Some analysts say that stemming the sell-off in bonds could be done through rhetoric alone, although if this failed, the only alternatives would be a Bank of Canada-style reorientation of the existing $120bn per month quantitative easing programme so that it then buys up more longer-term bonds, or an increase in the overall size of the programme.

Either of the latter two outcomes would likely wound the U.S. Dollar and could be a boon for the New Zealand Dollar to the extent that yields are responsible for recent losses. The decision comes after President Joe Biden signed off on a $1.9 trillion financial support package for companies and households, and amid a quickening pace in the U.S. vaccination programme that is enabling an earlier-than-anticipated reopening of the world's largest economy.

"NZD/USD has been trapped in a narrow range over past week with direction to be dictated by a clear break. However, any NZD fall would be seen as a buying opportunity," says Imre Speizer, head of NZ strategy at Westpac. "Our medium term view remains NZD positive and NZD/USD is to resume towards 0.7500." 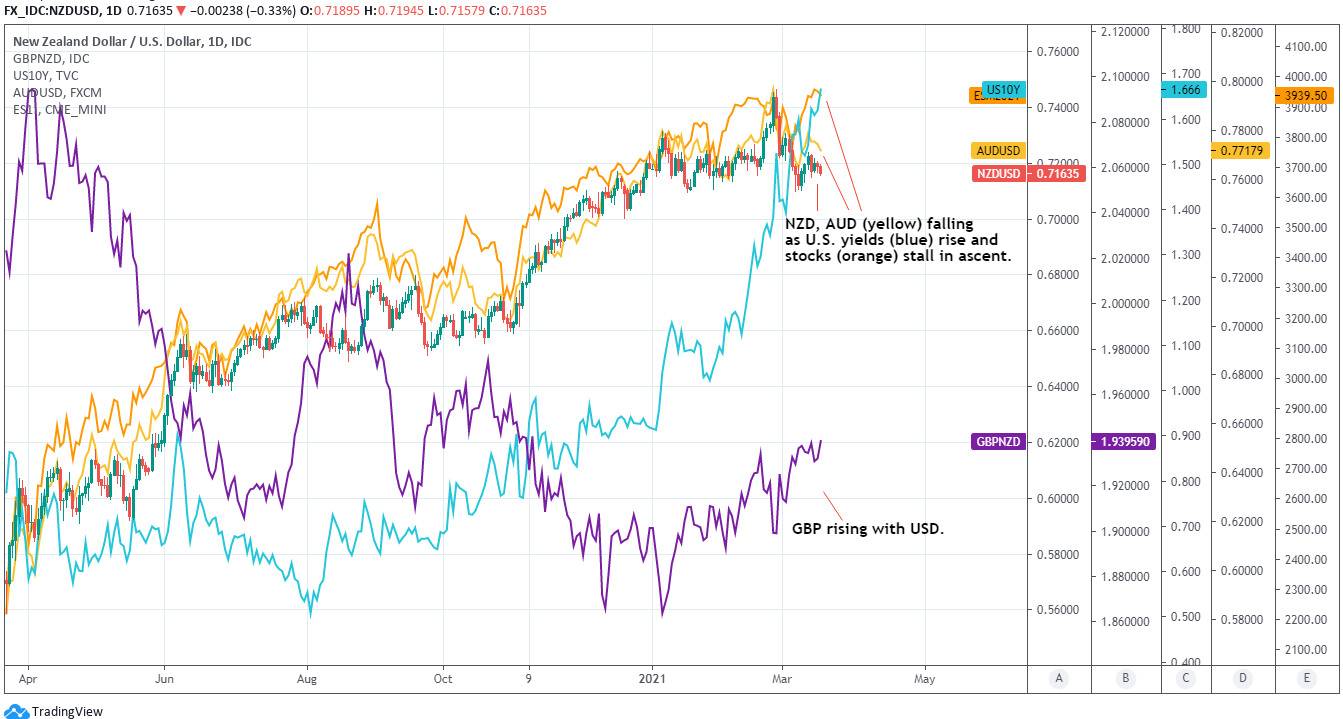