The RBNZ forms the key highlight for the New Zealand Dollar in the approach to month-end, given the previous policy statement was issued back in November.

The meeting comes in a week that sees the New Zealand Dollar hit fresh multi-month and multi-year highs against some of its major partners, namely the Dollar and Euro.

While the appreciation will suit sellers of the New Zealand Dollar, it will only serve to frustrate the RBNZ's efforts to stimulate domestic inflation and analysts are wary that the RBNZ signals the currency is a risk to the country's growth potential.

"We think risks are skewed towards NZD weakness as the RBNZ is likely to lean against the move higher in rates and NZD strength," says Ashish Agrawal, an analyst with Barclays.

Ahead of the Wednesday statement, the Pound-to-New Zealand Dollar exchange rate is quoted at 1.9189, which is actually where it ended on November 11, 2021 - the day of the previous RBNZ statement.

But it is against the U.S. Dollar where the RBNZ's concerns will lie as the New Zealand Dollar has been in a clear trend of appreciation.

Indeed, NZD/USD has on February 22 reached a new near-three year high as the last time such levels were available was back in April 2018: 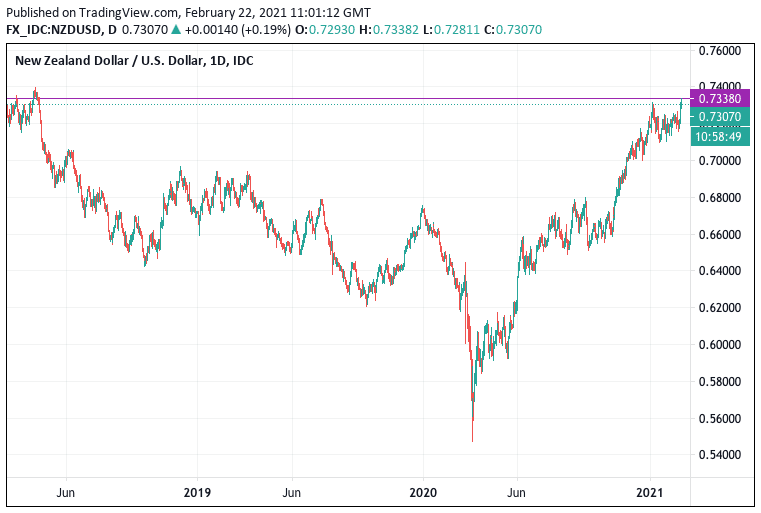 The Euro is also losing ground to a strengthening kiwi: the EUR/NZD exchange rate is now down at 1.6597, its weakest since July 2019.

"The RBNZ is likely to lean against the move higher in rates and NZD strength. The RBNZ could also express concerns over NZD strength, as the NZD TWI at 74.9 is well above the RBNZ's projection of 71.5 in the November forecast. The RBNZ is expected to keep the policy rate and the parameters of QE program unchanged. We also expect the RBNZ to acknowledge the improving outlook and revise growth forecasts higher," says Agrawal.

When a currency rises in value the cost of imports falls, which in turn can lower domestic inflation levels and frustrate the RBNZ's attempts to get inflation back to the 2.0% target. In addition, a stronger exchange rate tends to lower the earnings of foreign exporters, thereby potentially posing a headwind to economic growth.

The RBNZ will therefore not be welcoming of the rise in valuations of the currency it issues, but trying to talk it down might only deliver short-term impacts.

After all, only a rate cut or substantial increase in quantitative easing would likely achieve a meaningful depreciation.

Given that the New Zealand economy has continue to grow and asset prices in New Zealand are appreciating - particularly house prices - the justification for cutting rates again and boosting quantitative easing is thin. If anything, it risks stoking a domestic bubble.

However, Orr could have another trick up his sleeve.

"We think the RBNZ is unlikely to withdraw stimulus anytime soon, especially after the RBA extended QE purchases, and will likely maintain an accommodative monetary policy stance. However, one cannot ignore risks of the RBNZ actively considering 'foreign asset purchases' to boost stimulus. Reduced NZGB issuance and the RBNZ's high share of outstanding NZGBs make it challenging for the RBNZ to increase the size of the LSAP or extend purchases by a large amount," says Agrawal.

Any such surprises could prove to be a surprise to expectations and could therefore impact the New Zealand Dollar, and send it lower.

In July 2020 Orr said the Bank would actively prepare an additional set of stimulus tools to be used if necessary, depending on growth and inflation.

He said the RBNZ could include negative interest rates, a funding-for-lending programme and the possibility of buying foreign assets.

While a cut in interest rates to negative is now firmly off the table, buying foreign bonds (which involves the selling of New Zealand Dollars, thereby lowering its value), could yet be pursued.

"We think risks are skewed towards NZD weakness," says Agrawal.

Nevertheless, upside risks for the currency are growing given the ongoing firmness in global commodity prices and the robust domestic economy.

"The recent performance of the New Zealand economy has placed the RBNZ in pole position to normalisation," says Daniel Been, Head of FX Research at ANZ.

Policy normalisation at the RBNZ would involve exiting it quantitative easing programme and signalling the potential for future interest rate rises.

This would bestow further upside pressures on the currency.

ANZ recently told clients they were no longer expecting the RBNZ to cut rates owing to the better-than-expected position the economy finds itself in. 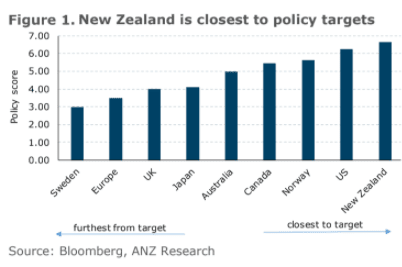 According to ANZ's research, New Zealand's economy has outperformed to a degree that the RBNZ can start considering rate rises.

Until the global economy deteriorates or the outlook for the New Zealand economy genuinely deteriorates, New Zealand Dollar weakness sparked by the RBNZ will therefore likely prove temporary.