The New Zealand Dollar cooled its heels in sympathy with the Aussie on Tuesday in a now-rare bout of underperformance by the antipodean currencies, but it's been tipped by recovery later this week as a Treasury financial update and GDP data remind investors of the country's strong fundamentals.

China's apparent ban on the importation of Australian coal was cited as a driver of Tuesday's underperformance by the New Zealand Dollar, which was lower against all major currencies for the session.

"Most majors remain close to unchanged from last session’s levels. The usual equity beta to FX was partially interrupted by domestic events. AUD and NZD weakened after China reported a ban on Australian coal imports, stranding over 50 shipments of coal off the Chinese coastline," says Sarah Ying, a strategist at CIBC Capital Markets.

Both the Aussie and Kiwi were found at the bottom of the major currency pile, with NZD/USD -0.18% at 0.7071 after falling from near-three-year highs around 0.7119 on Monday.

The Pound-to-New Zealand Dollar rate was 0.61% higher at 1.8925 amid Brexit-related outperformance by Sterling, but still near to 18-month lows.

Despite Tuesday's softness there's no shortage of potential triggers on this week's path ahead for a renewed bout of New Zealand Dollar strength. 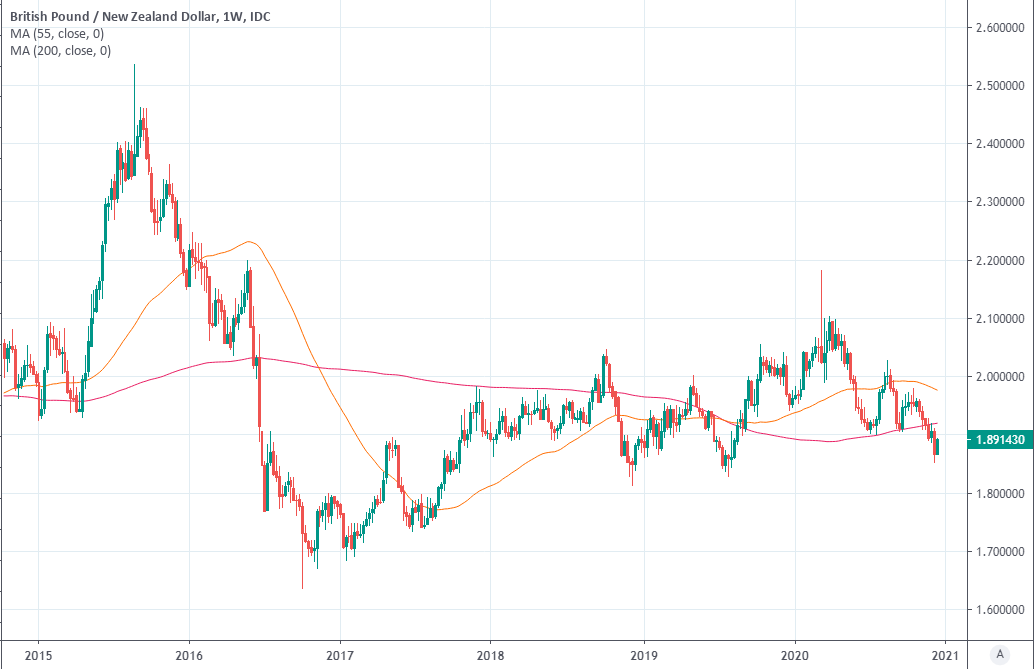 "The extension of Brexit talks has brought hope that a deal can be done, and that in turn helped fuel risk sentiment, but markets have succumbed to profit-taking in recent hours. On balance we expect this week to be a good one for the NZD, with the FOMC easing further, HYEFU painting a favourable fiscal picture and GDP data likely to show a bigger than consensus rebound. But it won’t be plain sailing as last night demonstrates," says David Croy, a strategist at ANZ. "The risk is we get some good GBP news."

New Zealand's half-year economic and financial update will be published by the national Treasury overnight and is expected by local analysts to remind international markets of what remain strong Kiwi fundamentals. Treasury already said back in November that it expects Kiwi debt-to-GDP to come in at just 27% for 2020 and even after all of the spending associated with two coronavirus-inspired bouts of 'lockdown,' which compares favourably with ratios of 100% or more in Europe and elsewhere including the UK.

Low debt levels coming into and out of the crisis are an almost unique fundamental that's not been lost on investors while a house price surge, which is a source of tension between the government and central bank, is evidence of New Zealand's merit as an investment destination. The attractiveness of the economy was further burnished last week by confirmation of a strong recovery in activity that bodes well for recent and future GDP.

"NZD is still a current account deficit currency and is more dependent on a narrower basket of exports. With that in mind, we acknowledge more downside risk to NZDUSD if something goes wrong with the global recovery. However, in the base case outlook, we see NZD rallying to 0.75 on a 1Y horizon," says Stephen Gallo, European head of FX strategy at BMO Capital Markets. "We expect AUDUSD and NZD to respectively reach 0.77 and 0.72 at the 3M horizon. Both currencies are undergirded by economies that have been less damaged by COVID-19 than others in the G10. Both conduct more trade with Asia than North America or Europe, which means that their respective rallies against the USD this year haven't impacted competitiveness." 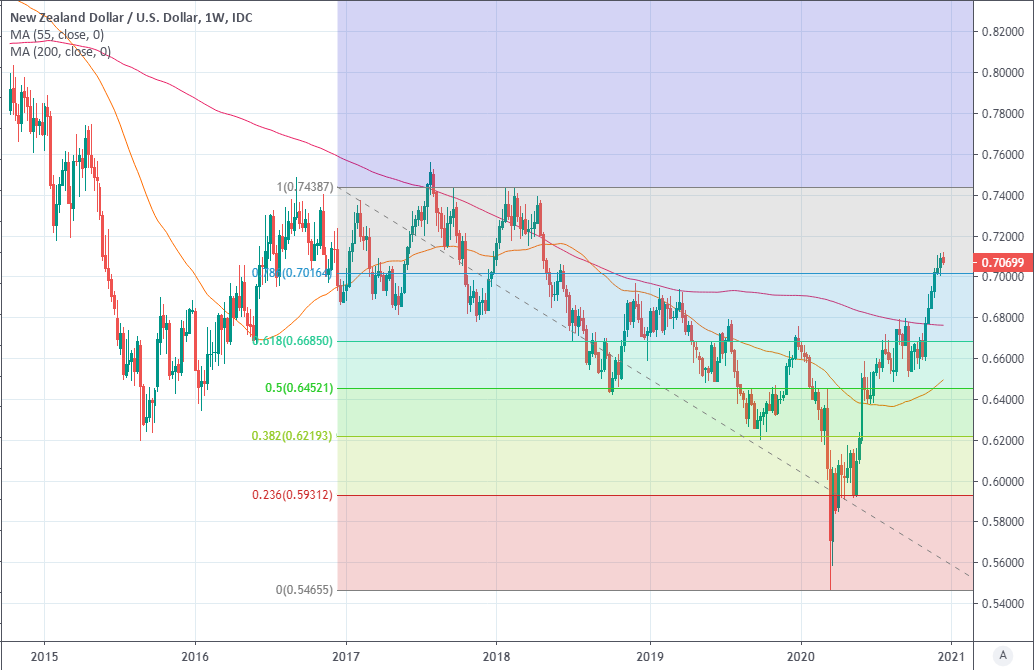 Wednesday's economic and financial update is expected overnight and just a European session away from the latest Federal Reserve (Fed) monetary policy decision, which could see the bank weighing on the U.S. Dollar and lifting NZD/USD if it follows up on November's hints by aiming its quantitative easing cannon at longer-term U.S. government bonds, which still offer investors something that might pass under bad lighting for some semblance of 'yield'.

The New Zealand Activity Index was 1.6% higher last month than at the same time one year before, treasury said in its weekly economic update last Friday, which is an achievement made all the more notable by a continued closure of the tourism industry that is normally worth more than five percent of GDP.

These signs of a strong recovery mean that Thursday's third-quarter GDP data will likely garner much interest and attention from financial markets. Consensus, or the average of economist projections, is looking for GDP to have risen at a quarter-on-quarter pace of 12.8% for the three months to the end of September when it's released at 21:45 London time on Thursday, although ANZ economists see scope for an even stronger outturn than that.

"There is a fair bit of data out this week – it’s a bit like the twelve days of Christmas, but for economic aficionados," says Nathaniel Keall, an economist at ASB Bank, a part of Commonwealth Bank of Australia. "We expect the result to show a 13% qoq lift, which would represent a solid bounce back after the 12.2% decline we saw last quarter. That will still leave the economy about 2.2% smaller than it was before the pandemic went global, but all up the New Zealand economy has proven much more resilient than most expected earlier."