The Australian and New Zealand Dollars rose broadly in the final session of the week even as they paid the cost of continued international border closures, but next year a reopening of decimated domestic tourism sectors provide antipodean economies, and currencies, with a late 2021 shot in the arm.

Antipodean Dollars advanced on the greenback and other major rivals Friday amid an evident upbeat mood among investors whose appetite for risk assets lifted stock markets and commodities, while favouring closely-related currencies.

Gains have been modest however, and the performance of both has been lacklustre for the week after the Kiwi was hampered by Reserve Bank of New Zealand (RBNZ) talk of negative interest rates while the Aussie delivered an indecisive response Treasurer Josh Frydenburg’s 2021 federal budget.

Neither's wounds have dislodged either of the two currencies from their nascent uptrends against the U.S. Dollar and others including Sterling, uptrends that are increasingly drawing scrutiny from central banks, which fear stifled export competitiveness and ebbing inflation pressures.

Uptrends could endure for a while yet if Frydenberg and his New Zealand counterpart Grant Roberston are right in assuming that until the end of next year, both countries will remain closed to travellers and tourists from the outside world; both typically meaningful contributors to pre-coronavirus economies. 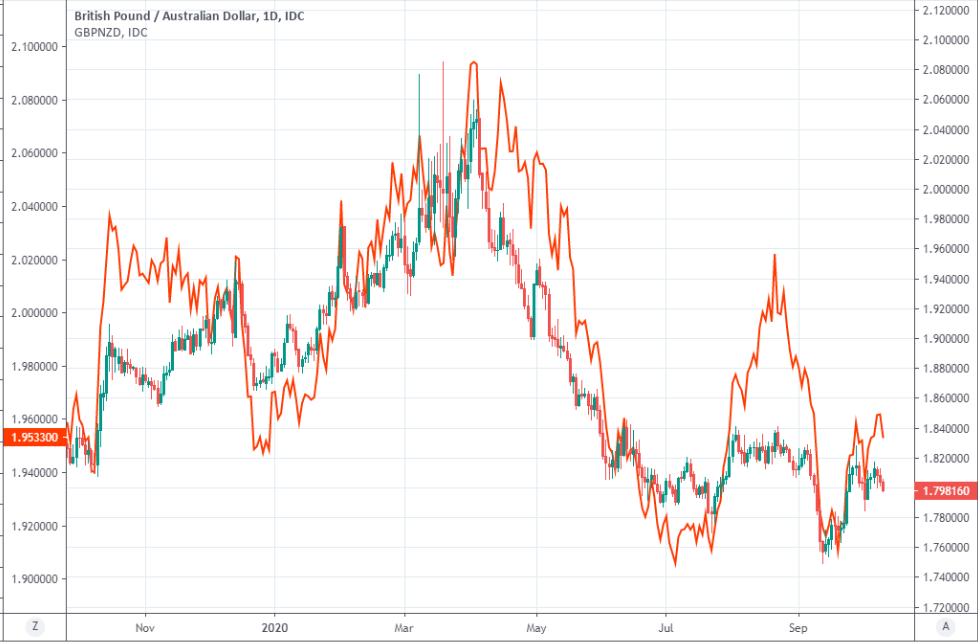 Above: GBP/AUD, GBP/NZD (orange line, left axis) at daily intervals, pushed to 2020 lows in September amid weakness in Sterling and strength in antipodean currencies.

“Australian bonds have continued to be bought by global investors seeking yield and also by local ADIs under bank liquidity regulations and by the domestic fund management community for benchmarking purposes. The question is whether they will continue to do so despite record low absolute yields," says Damien McColough, head of Australian rates strategy at Westpac, following Tuesday’s budget. “We think they will, as relatively speaking, AU yields continue to represent value on a “reward for risk” basis versus global alternatives.”

Debt-to-GDP ratios that are below average for major advanced economies have made typically-higher yielding antipodean government bonds especially attractive to international investors who’ve all been starved of  yield as a result of the pandemic. Especially when combined with superior virus containment at home and a shoddy state of affairs in other parts of the world.

This has been a key driver of ongoing rallies by the antipodean currencies, which led initially to complaints from the Reserve Bank of Australia (RBA) and RBNZ, although these have since turned to threats of policy action with New Zealand’s central bank the more vocal and most proactive.

RBNZ staff told a closed door briefing this week they’d rather do too much too and too soon for the economy than too little and too late, before confirming that preparations for the implementation of a negative cash rate are ongoing while hinting that actual implementation of one is quite likely.

“If the RBNZ delivers a negative policy rate, New Zealand will be the first economy with both a negative policy interest rate and a current account deficit.  There is no precedent for this combination and its ability to deliver currency weakness,” says Joseph Capurso, a strategist at Commonwealth Bank of Australia in a recent review of the bank’s forecasts. “The upcoming US election is a downside risk for our NZD forecasts in our view.  Similar to [AUD], a victory by President Trump can weigh on NZD/USD (in our view a Trump victory is USD supportive).  However, because President Trump’s policies are unlikely to be as radical as they were in 2016, NZD/USD weakness would be short‑lived.”

Negative rates might weaken the New Zealand Dollar in 2021, but investors have already priced-in a -0.15% cash rate for April and a -0.19% rate for the end of 2021 so such a policy pivot may also already be reflected in exchange rates.

This is itself a reason to expect the RBNZ to follow up on its threats, because not doing so would simply risk even further currency strength, which neither the RBNZ nor RBA wants to see.

Already, uptrends are at risk of enduring through the year ahead if the market is right about a Democratic Party victory in November’s U.S. election. That's meant to sink the U.S. Dollar through next year. But the real rub for the two central banks and possible boon for the two Dollars further out is that uptrends, if not disrupted before, could  be boosted further still in late 2021. 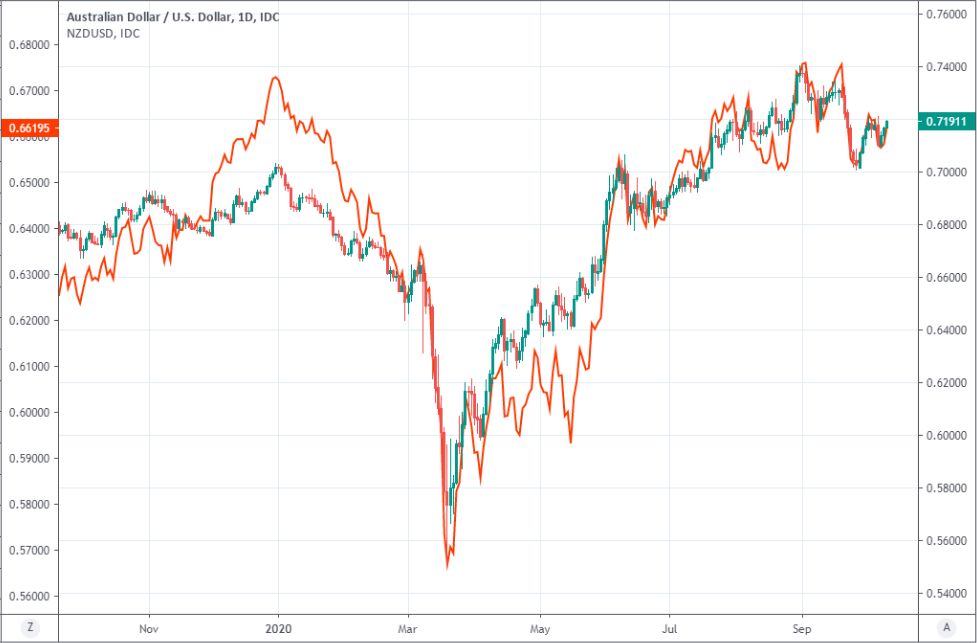 Above: AUD/USD, NZD/USD (orange line, left axis) at daily intervals, pushed to 2020 lows in September amid weakness in Sterling and strength in antipodean currencies.

"The unemployment rate is forecast to reach 8 per cent in the December quarter 2020, reflecting headwinds from ongoing international and domestic border closures, the continuation of social restrictions in Victoria, ongoing restructuring amongst businesses and the impact of increased participation, before falling to 6½ per cent by the June quarter 2022 as economic activity recovers,” says Australian treasurer Josh Frydenburg in Tuesday’s federal budget. “A gradual return of international students and permanent migrants is assumed through the latter part of 2021 (with small, phased pilot programs beginning to return international students from late 2020). Inbound and outbound international travel is expected to remain low through the latter part of 2021, after which a gradual recovery in international tourism is also assumed to occur."

Currency rallies may be boosted if Australian and New Zealand borders remain closed until the end of 2021, because both countries have typically earned meaningful shares of GDP in the tourism sector.

Statistics New Zealand said the Kiwi industry pulled in 5.8% of national GDP in 2019 while the Australian Bureau of Statistics said the contribution to its economy was a lesser but still meaningful 3.1% last year.

GDP data for August confirmed on Friday that the easy picking of the low hanging fruit in the UK’s economic recovery had already been done even before the end of the third quarter, while quarterly growth in economies elsewhere in the world is expected to slow markedly in 2021 for similar reasons, with the remaining lost output potentially taking years more to recover.

But Aussie and Kiwi growth could be supplemented late in 2021 and beyond by reopened borders, especially if markets are right in betting a vaccine will soon be found and if this leads to a broader recovery in global travel.

In the relative and ever forward-looking world of foreign currency exchange rates the prospect of this form of already-bought and paid-for stimulus being delivered late in 2021, against a backdrop of a slowing global economy, could be a powerful argument in favour of the antipodean currencies next year.