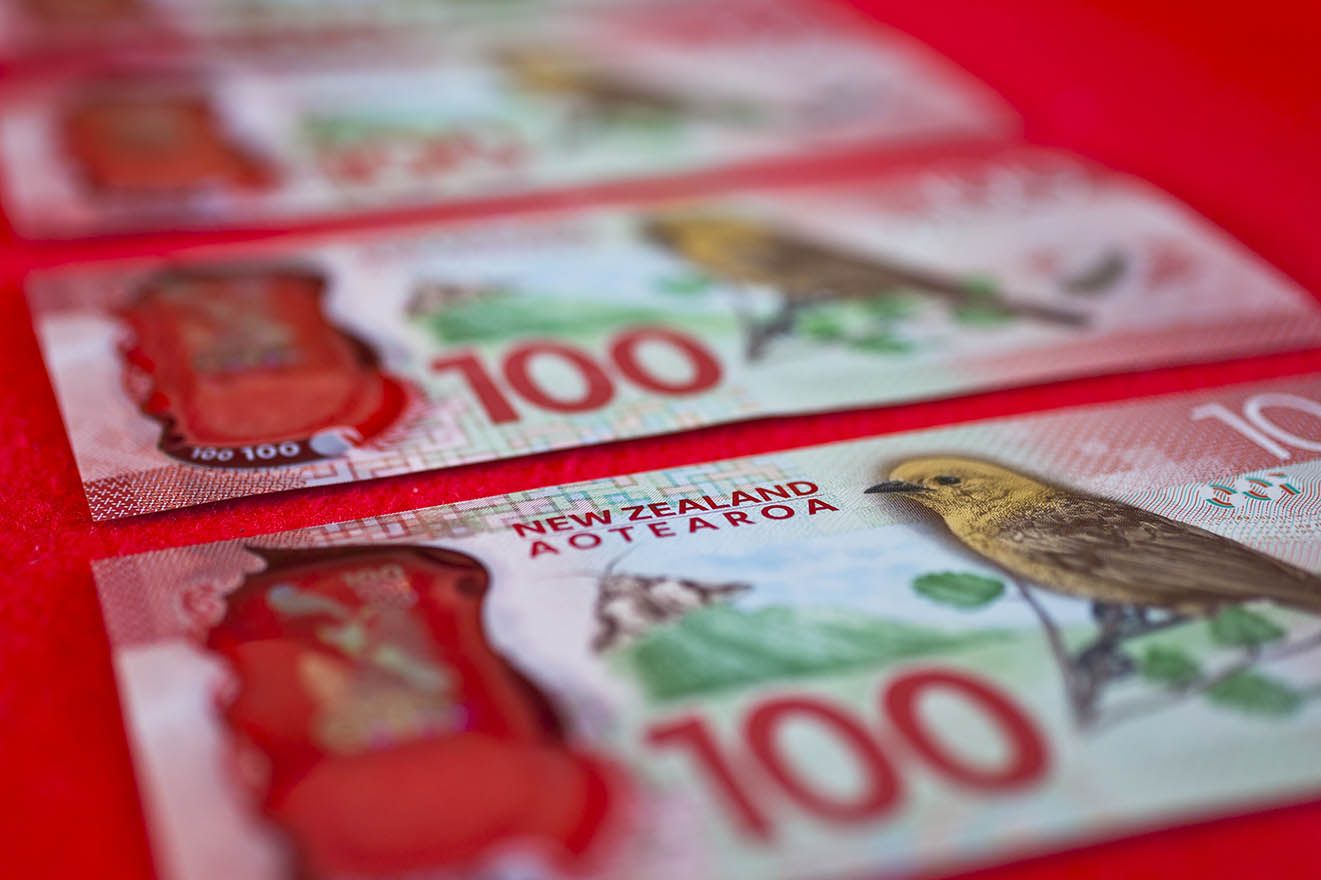 New Zealand's long wait for a vaccine could leave the NZ Dollar at a Disadvantage shows research from Deutsche Bank, while local lender ASB says the economy will have only likely fully recovered from the covid-19 crisis by 2023.

Deutsche Bank have looked at the various vaccine front-runners and identified which countries have put in preorders, noting that while some countries have hedged themselves heavily others are at risk of a protracted wait if the company they have backed fails to deliver.

The rollout of a vaccine is expected to be a momentous moment for the global economy and financial markets as this would be the point at which the covid-19 pandemic reaches a turning point. Those countries that can get access to a vaccine would likely be able to enter the post-covid world first, thereby gaining a potential first-mover advantage.

And this will matter for currencies.

"Whether and when one of the vaccine candidates can be approved and rolled out will be crucial for risk sentiment in coming months, and markets will be sensitive to the general news flow coming out of clinical trials. For FX in particular, however, we argue that it also matters which specific vaccine candidate wins the race," says Robin Winkler, Strategist at Deutsche Bank.

Data compiled by Deutsche Bank shows that the UK has hedged itself most heavily, involving itself in the most number of projects and securing preorders for more candidates. The UK has preordered enough vaccines to provide five doses per citizen, with preorders made with six of the leading vaccine developers; more than any other country.

However, "it is worth noting that New Zealand and Norway, have struck no bilateral agreements with manufacturers, committing instead to participating in the international Covax facility. In a nationalistic scramble for supplies this may prove an economic disadvantage," says Winkler. 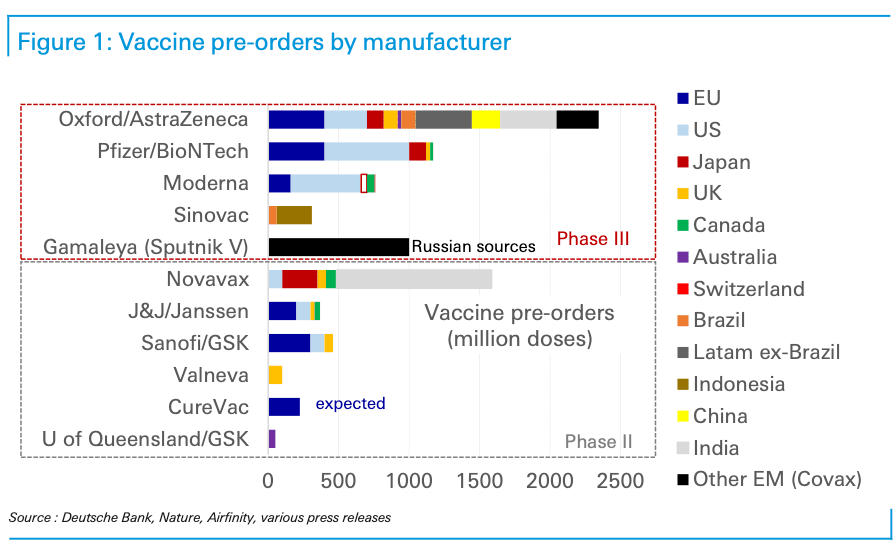 For New Zealand, it appears that the success of the Oxford/Astrazeneca is important, firstly because most nations will secure access to this vaccine, ultimately negating the first mover advantage. Secondly, it appears New Zealand's participation in the Covax facility allows it access to the vaccine. 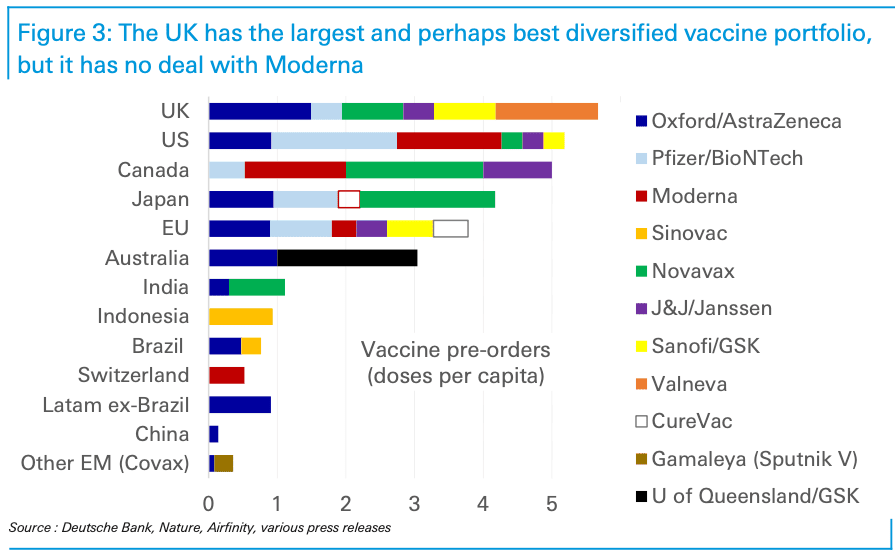 "A successful Oxford/AstraZeneca vaccine would be most universally helpful as of today. Most major countries - the US, the EU, the UK, Japan, Australia, China - have pre-ordered hundreds of millions of doses each. But developing nations are also heavily invested, either directly or indirectly. Covax, a facility funded by international organisations including the WHO to ensure vaccine access for poor countries, has spent the bulk of its resources on an agreement with AZ," says Winkler.

How soon New Zealand accesses a vaccine could determine how soon it recovers fully from the economic crisis sparked by global and domestic lockdowns.

"Even once a vaccine is developed, it will take some time before it can be manufactured and distributed in quantities which will allow border restrictions to be materially relaxed," says Nick Tuffley, Chief Economist at ASB.

New Zealand has engaged a particularly aggressive stance on the virus, opting to pursue an elimination strategy. This is feasible on a small and relatively isolated population such as New Zealand's, but it nevertheless carries a substantial financial cost.

"Most of the NZD crosses are expected to slide gradually lower," says Tuffley.

Over 2021, the realities of the weaker labour market are likely to catch up with consumers, impacting spending appetites, and many firms may remain reluctant to invest while the uncertainty of the pandemic continues to weigh according to the bank.

The RBNZ is meanwhile expected to cut the OCR by 75bps, to -0.50%, in April 2021, an expectation built on the view that the RBNZ looks willing to move the OCR lower after its current forward guidance (0.25% OCR until early 2021) expires. Furthermore ASB argues current monetary settings do not offer enough economic support.

"While the NZ economy has proven to be more resilient than expected over 2020, we remain relatively cautious about the pace of growth over 2021 and 2022," says Tuffley. "The risks are tilted towards OCR cuts being delivered sooner and we would not rule out a February OCR cut."

The first RBNZ rate hike is expected in early 2023 when the global and domestic economies are in full recovery mode.

The New Zealand Dollar is said to be particularly prone to losses against the Australian Dollar which should be supported by a relatively inactive central bank.

The NZD/USD exchange rate is forecast to be at 0.67 by year-end, where it is expected to stay until end-March 2021.

The EUR/NZD exchange rate is forecast at 1.85 by year-end, similar to where it is forecast to be by the end of March 2021.