- GBP/NZD technicals advocate for further losses
- But 1.90 seen as a solid floor
- Substantial deterioration in Brexit negotiations needed to break 1.90

The Pound-to-New Zealand Dollar exchange rate (GBP/NZD) is expected to retain a heavy bias given the solid and entrenched downside momentum in place, however following three weeks of decline the pair is increasingly at risk of entering oversold conditions while it will take a titanic push to the pair below the significant support at 1.90.

The Pound's sell-off against the New Zealand Dollar and other major peers accelerated last week as news concerning EU-UK trade negotiations deteriorated and the market ramped up expectations for a 'no deal' outcome to above 50%.

To give a sense of the negative momentum, the GBP/NZD exchange rate has now fallen for three weeks in succession, with last week's 2.80% decline being the largest weekly decline since November 2018.

Observations of the daily chart show momentum indicators continue to advocate for further losses with the Relative Strength Indicator (RSI) - a favoured momentum signal amongst technical analysts - is at 30, which places GBP/NZD firmly in downtrend territory. 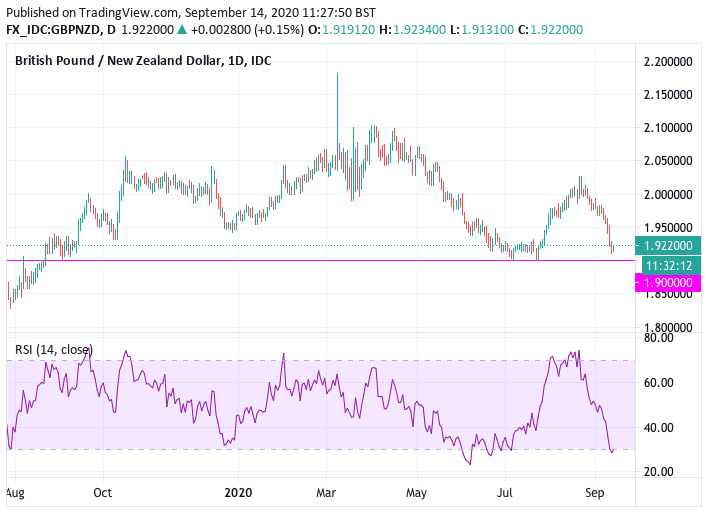 While the overarching takeaway from the RSI is that momentum firmly favours further GBP/NZD downside it cannot be ignored that should the RSI fall below 30 the exchange rate would enter oversold conditions. A RSI reading below 30 signals that an asset class has become technically oversold, and consolidation or a recovery is therefore imminent.

The charts also show 1.90 to be a solid floor for the GBP/NZD exchange rate that has arrested declines on numerous occasions in the past. This tells us the market is structurally uncomfortable below these levels and the bar to declines below here on a sustainable basis is set high.

In short, it will take increasingly GBP-negative news to push below here.

"Outsized moves in GBP this week have injected a sizeable risk premium in GBP. It's now trading at a decent discount on our short-term valuation, underscoring that some of the recent Brexit news has already been priced in. At the very least, this backdrop suggests that in the coming weeks GBP would benefit more from good news rather than sink further on bad news. We still expect more volatility but risk/reward favours taking profit at these levels," says Mark McCormick, Global Head of FX Strategy at TD Securities.

At present it is hard to see where such a signal might come from given the market has drastically reduced odds of a Brexit trade deal being struck and it would require a significant deterioration in relations to ramp up GBP negativity at the current juncture.

The Pound has fell sharply in September and is now the worst performing major currency of 2020, an accoladed the New Zealand Dollar held in the June-August period.

Sterling declines come as a deadlock in Brexit negotiations between the EU and UK triggers political uncertainty and a souring of relations between Brussels and London, leaving markets to ramp up expectations for a 'no deal' outcome to trade negotiations.

"GBP has predictably fallen in the aftermath of these developments," says Shahab Jalinoos, FX Strategist at Credit Suisse, who last week told clients his team was lowering some of their Sterling forecasts.

As long as tensions remain elevated, and until there is some signs of progress, expect the Pound to retain a heavy tone against its Australian counterpart which, by contrast, is one of 2020's better performers.

The risk to the view that GBP/AUD is poised for further declines is a sudden improvement in sentiment towards negotiations, or some developments that suggests markets are too pessimistic.

Indeed, the view that the two sides are posturing to gain leverage remains a popular one amongst analysts that should ensure some downside protection to yet further deep losses.

"The risk to this view adjustment is that it quickly becomes obvious that the latest UK government moves discussed above are a negotiating tactic only," adds Jalinoos.

Based on the technical readings and state of play on the Brexit front, we would expect the 1.90 to be a short-term low point for GBP/NZD.