The Pound-New Zealand Dollar exchange rate is trading higher at the start of the new week in line with the broadly supportive technical structure of the market, however a highly anticipated mid-week meeting of the Reserve Bank of New Zealand could inject some volatility into the exchange rate.

The GBP/NZD pair has now risen for three weeks in succession and is seen trading at 1.9827 at the time of writing, confirming the existence of a short-term bull trend that is likely to extend based on current technical configurations.

"The upside prevails as long as 1.9466 is support," says a note on the market from technical analysis providers Trading Central.

Trading Central observe 1.9466 to be a key pivot that if breached would flip the market from bull mode into bear mode, from which further declines to 1.9122 and then 1.8918 becomes possible.

Should the market stay above the pivot however, further gains to 2.0213 and then 2.0419 are possible according to the analysis. 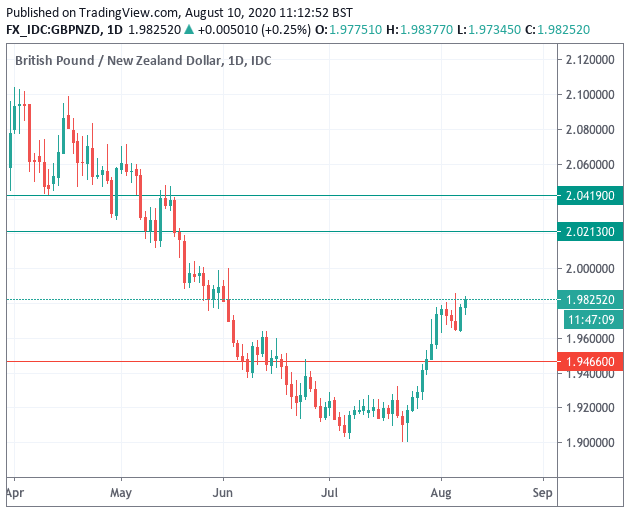 Be aware however that the daily charts are showing the Relative Strength Index - a measure of momentum and overbought or oversold conditions - is trading above 70. This indicates to proponents of technical analysis that the market is overbought and therefore either a correction or period of consolidation is due.

A potential trigger to such an outcome could well be the eagerly-anticipated Reserve Bank of New Zealand (RBNZ) meeting due mid=week.

Market participants expect policy will be left unchanged, but there are risks that a dovish tone is sounded according to economists at Citi.

Activity data for the New Zealand economy since the RBNZ's last forecasts were made in May has recovered to justify an upward revision to growth forecasts, however, Citi say of greater focus for markets will be the the RBNZ’s review of its monetary policy tools, particularly concerning quantitative easing (known as the LSAP).

The RBNZ has committed to purchasing N$60BN of domestic bonds in order to shore up the economy, the NZ Dollar could come under pressure should policy makers boost this amount or the nature of the bonds it buys.

"We think NZD looks shaky as the RBNZ looks poised to expand its LSAPs this week. This may even include expansion into foreign bond purchases - a move tantamount to FX intervention in all but name," says Mark McCormick, Global Head of FX Strategy at TD Securities.

A further potential trigger to a weaker New Zealand Dollar would come should the RBNZ indicate it is prepared to cut interest rates further and into negative territory.

With the market looking to be rather bearish on the New Zealand Dollar heading into the meeting, we are wary of a classic "sell the rumour, buy the fact" reaction as the bar to further downside in the currency has now been elevated.

Indeed, there is a good chance that the New Zealand Dollar rallies sharply in a relief-style rally should the RBNZ indicate it is happy with current settings and patience is warranted.

RBNZ aside, studies of historical trends in the New Zealand Dollar shows August can be a poor month.

"Seasonality shows that there is more risk avoidance in August than in other months, and in the G10 currency space NZD tends to fall in line with AUD," says a note from Citi, which adds:

"With a general election due in September, if the market environment this year changes to risk-off again, the probability that NZD will depreciate over the next month, even if only temporarily, is likely to get higher."