Pound Sterling has recovered strongly against the U.S. Dollar in recent weeks in moves that have lifted the British currency against all of its major counterparts including the Kiwi Dollar, leading to a partial reversal of the punishing losses that blighted the Pound-to-New Zealand Dollar rate in the second quarter.

The Pound's recovery has come concurrent with a slowdown in the rally that was responsible for lifting the NZD/USD rate from below 0.55 in March to a high of 0.67 on Friday, which has augmented gains in GBP/NZD, which is effectively an amalgamation of GBP/USD and NZD/USD.

Both GBP/USD and NZD/USD have slipped into higher ranges amid an investor exodus from the U.S. Dollar which imply a 1.9696-to-2 trading range for GBP/NZD, with the exchange rate to be determined at any one time by the relative pace of gains and losses in the aforementioned pairs. 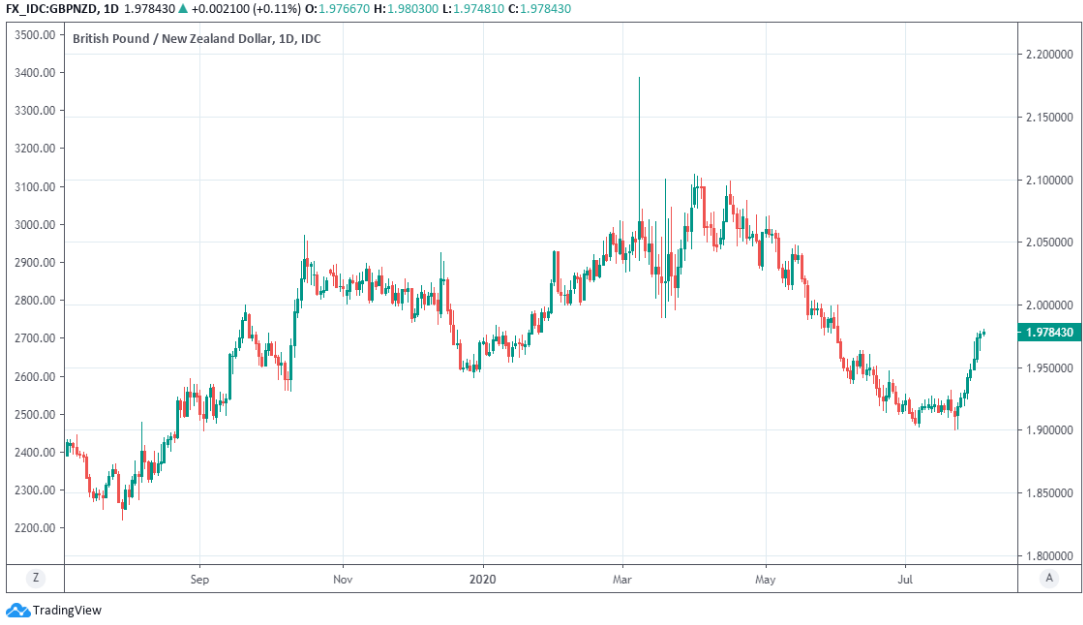 "The technical break of 0.5140 was negative and 0.50 looks to be the next “target”. The dream days of this cross above 0.52 now a faded memory. This cross seems to have no champions any more," says David Croy, a strategist at ANZ, tipping a level of NZD/GBP that equates to a GBP/NZD rate of 2.0. "Geopolitics is a risk but the USD rebound looks more temporary. However, with the RBNZ set to strike a dovish tone next week that will limit NZD upside too, suggesting a more neutral near-term outlook."

Croy says the exodus from the U.S. Dollar may continue to lift NZD/USD but with the RBNZ long concerned about currency strength and second quarter jobs report due to be released at 23:45 London time on Tuesday, domestic factors could put a cap on the Kiwi.

If NZD/USD continues to trade around 0.66 in the coming days as GBP/USD meanders between support and resistance at 1.28 and 1.32 respectively then the Pound-to-New Zealand Dollar rate would be found trading in a 1.9696-to-2.0 range. It was quoted at 1.9792 on Tuesday.

"NZD/USD will continue to be supported by USD weakness.  Nevertheless, New Zealand’s Q2 labour market data can spark some intra‑day NZD volatility (Wednesday).  Our ASB colleagues expect the unemployment rate to jump by 2ppts to 6.2%. The market consensus is for a more modest lift to 5.5%," says Kim Mundy, a strategist at Commonwealth Bank of Australia. 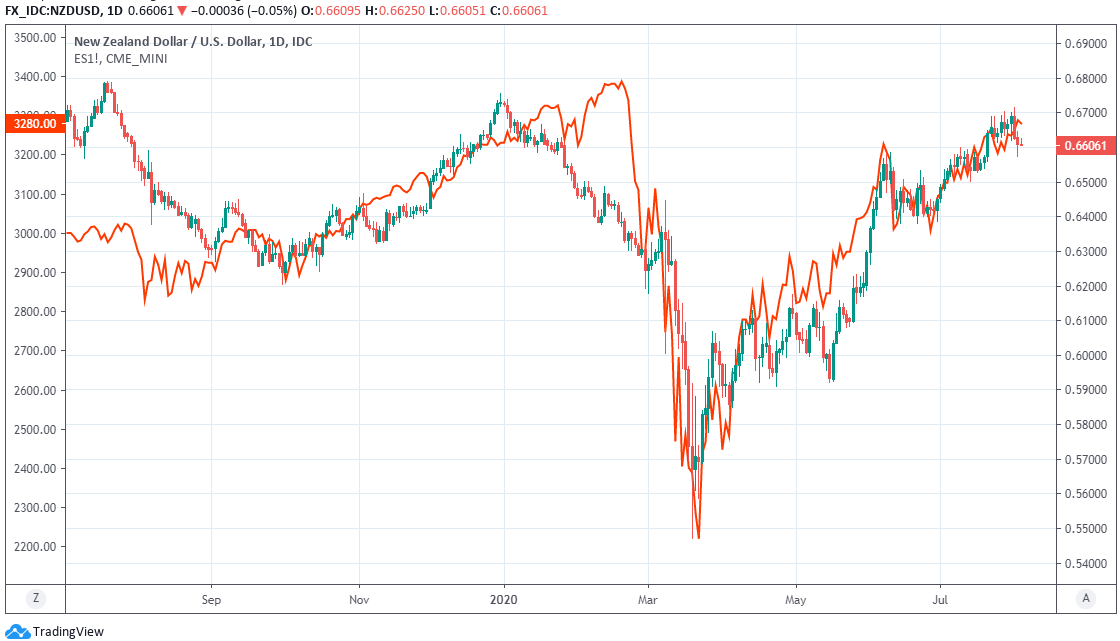 Consensus is looking for employment to have contracted by -2% in the second quarter and for the unemployment rate to have risen to 5.5% when Statistics New Zealand releases the data at 23:45 Tuesday, but the Kiwi could be sensitive to any disappointment.

New Zealand's Dollar retreated from all major currencies except the U.S. Dollar last month, which might be welcome news at the RBNZ although NZD/USD is still up nearly 20% from its March lows and the bank has threatened several times to intervene in the market to put a lid on the Kiwi.

The risk is that a worse-than-expected jobs report elicits a rebuke in the August 12 policy announcement or even a reaction in the form of an increase in its quantitative easing programme or a more explicit commitment to unconventional tools like negative interest rates and foreign asset purchases.

"The unemployment rate is expected to have risen to the 5.5% area, but there is a risk of a grimmer read given the very restrictive measures still in place in New Zealand in April and the hospitality sector struggling to recover on falling tourism," says Francesco Pesole, a strategist at ING. 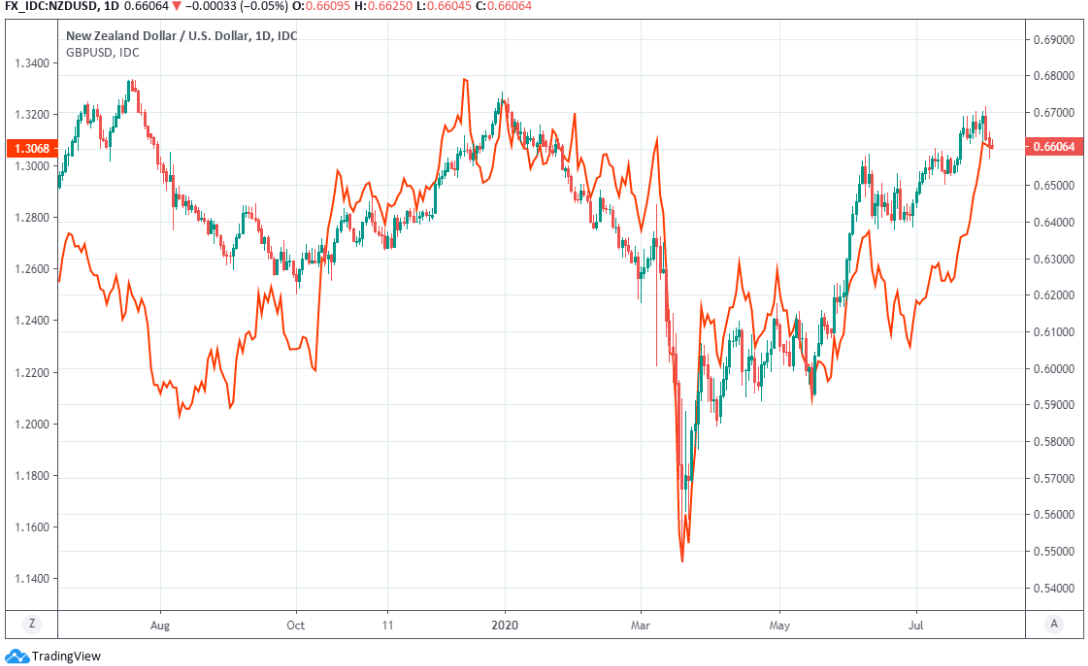 "NZD/USD may struggle to display another leg higher as rising concern around second waves around the world – along with the possibility of US-China tensions re-escalating – could keep sentiment capped," Pesole says.

The RBNZ will announce its next policy decision at 03:00 London time on Wednesday, 12 August and ANZ is looking for an increase in the size of its government bond purchases from NZ$60bn in total to NZ$90 bn.

This is a long way from being a consensus expectation so if realised, could weigh on the Kiwi and lift the Pound-to-New Zealand Dollar rate next week.

In June the RBNZ said "significant economic challenges remain" and that "the balance of economic risks remains to the downside," despite acknowledging New Zealand's outperformance in containing the coronavirus.

As a result, preparations for a turn to negative interest rates and foreign asset purchases continued.

"We expect the RBNZ to keep its options open and we’d be very surprised if they backed off signalling that they are open to negative rates. And the market seems to have discounted the prospect of foreign asset purchases, risking a negative NZD reaction if it remains on the table as we expect. Against the backdrop of broad-based USD weakness, that is likely to mean that NZD/USD holds up better than crosses like NZD/EUR and NZD/GBP," Croy says.