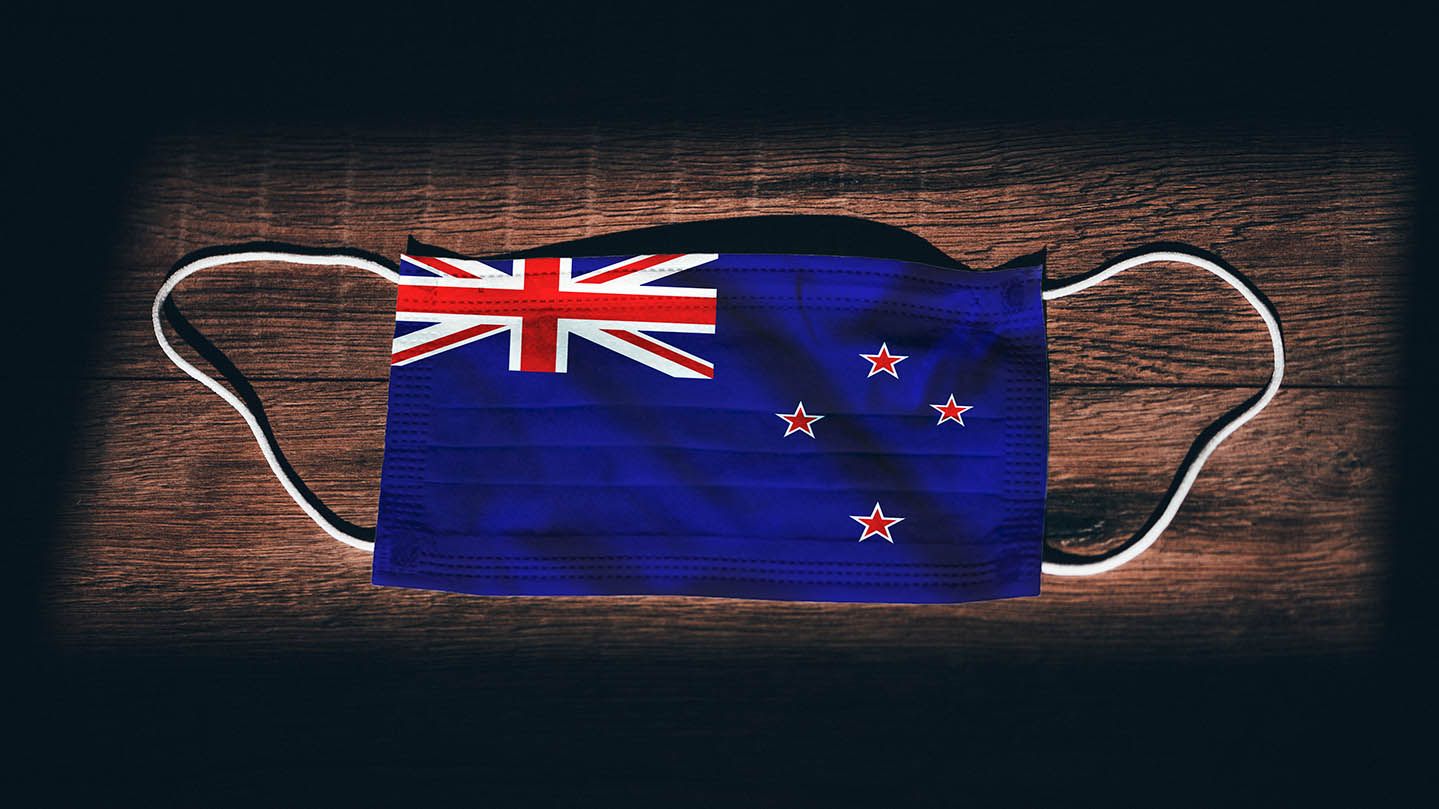 The New Zealand Dollar was riding high among major rivals Tuesday as a raucous mood in stock markets lifted risk currencies in moves that called a halt to Sterling's earlier attempt at lifting off 2020 lows against the Kiwi.

New Zealand's Dollar gained over all major rivals except the Aussie and Norwegian Krone Tuesday as investors celebrated improved prospects for a coronavirus vaccine as well as a surprise agreement by European Union national leaders to endorse the coronavirus recovery fund.

These treats were appetising enough for investors to overlook rising tensions between China and Western nations, evidenced this week by the UK's suspension of an extradition agreement with Hong Kong and multiple outcries over alleged rights abuses in Xinjiang province.

Those were in addition to Secretary of State Mike Pompeo's continued labelling of the Chinese Communist Party as a threat to freedom in all places that it exists and Defense Secretary Mark Esper's statement suggesting the U.S. will continue to supply arms to Taiwan. 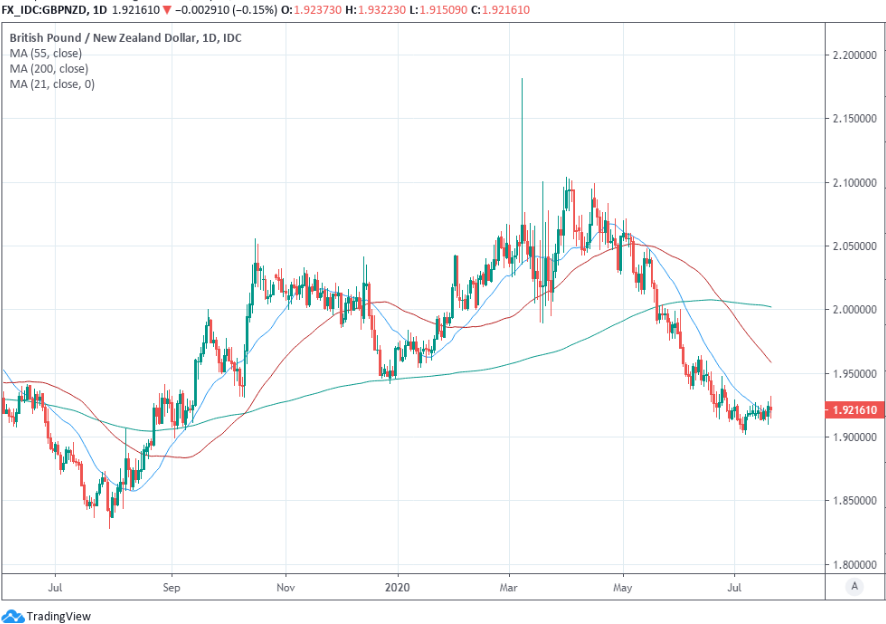 "Hopes that a vaccine will be found continue to buoy risk appetite and the NZD is benefitting from that," says David Croy, a strategist at ANZ. "GBP made a spirited rebound off last week’s low despite dovish BoE talk. The break below 0.52 looks technically weak, but with NZD optimism widespread, it’s difficult to see this cross weakening too far."

New Zealand's Dollar has outperformed a majority of its major counterparts in recent months and especially Sterling, having pushed the British currency -6.8% lower in the three months to Tuesday, leaving the Pound-to-New Zealand Dollar rate trading around 1.92.

Croy says the Pound-to-Kiwi rate's break below 1.9230, which equates to an NZD/GBP rate of 0.52, was unconvincing but he looks for Kiwi resilience to cap any possible rebound seen by the exchange rate over the coming weeks.

"The upper bounds of two-month range to 0.6600 are being tested and a break could signal a move towards 0.6750," says Tim Riddell, a macro strategist at Westpac. "NZ commodity prices and with little NZ data of note this week, another sound trade surplus should give support." 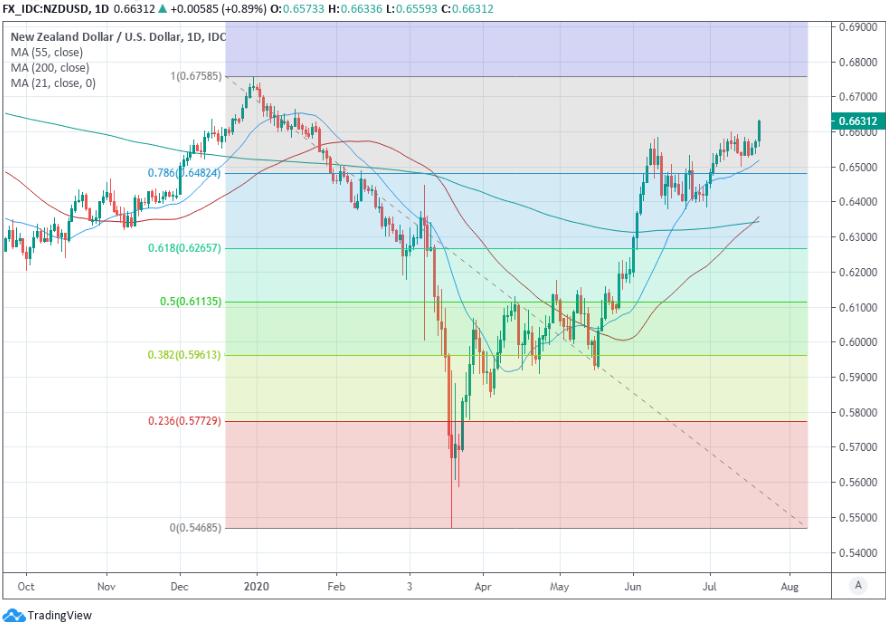 The Pound could rise back to 1.9407 even in a market where the Kiwi is testing 0.6750 if progress in the Brexit trade talks is made in the coming weeks, with even greater upside if progress coincides with a period of weakness or even simply comparative stability in the Kiwi.

An update is expected from negotiators by the Friday close this week but without timely progress Sterling could succumb further to the ebullient mood in global markets and the fundamentally stronger New Zealand Dollar.

"NZD/USD will continue to be largely driven by offshore developments this week. NZD can stay near the top if its recent trading range if USD remains heavy as we expect," says Kim Mundy at Commonwealth Bank of Australia.

New Zealand's government set aside NZ$14 billion of unused cash from its N$50bn coronavirus fund Monday, saying it'll be kept by and used to help the economy navigate whatever the coronavirus might throw at it next. 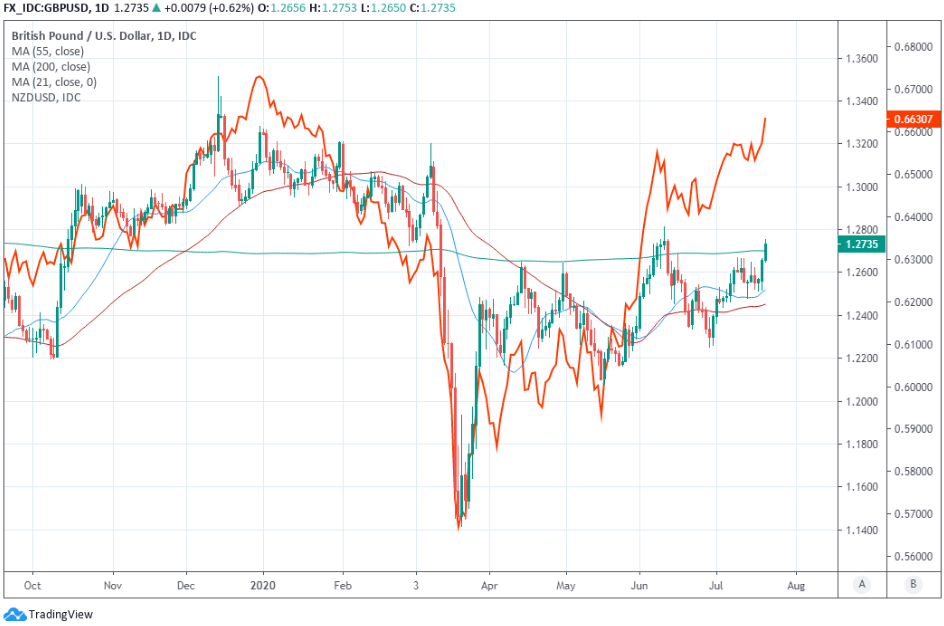 New Zealand has among the lowest debt-to-GDP ratios of major economies and was among the first to all but vanquish the coronavirus from its shores. NZ's economy and currency are also highly geared to changes in the global cycle so would benefit if the recovery is bolstered by a vaccine.

This and weakness in the U.S. Dollar is burnishing the appeal of NZD/USD to investors and enough so on Tuesday to put the Pound-to-New Zealand Dollar rate under pressure again after a fortnight of stability that appeared to bring an end to months of declines.

However, the Pound-to-New Zealand Dollar rate also benefits from strong technical support afforded by the 200-week moving-average at 1.8990 and 50% Fibonacci retracement of the post-referendum recovery that ended in March, which located around 1.9094 level. 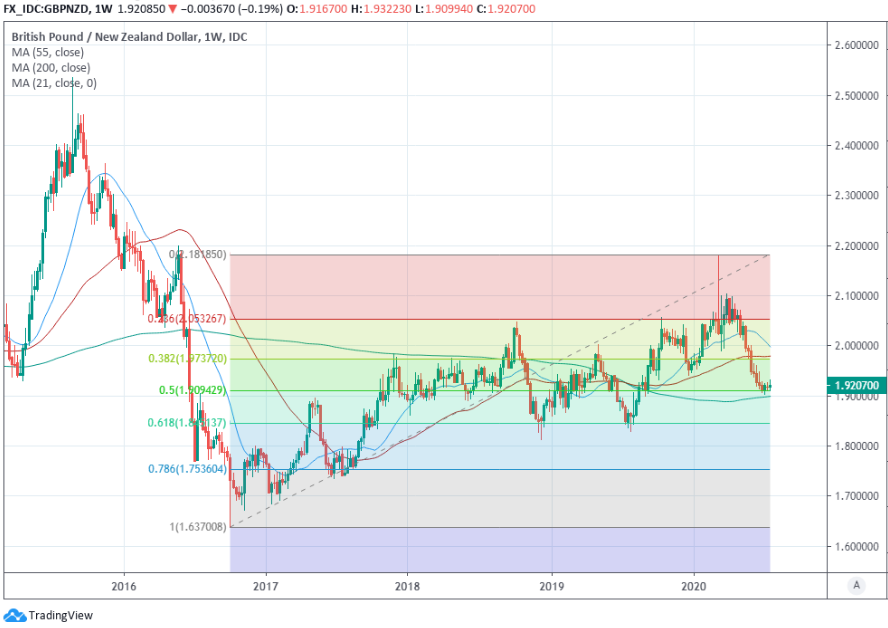