The New Zealand Dollar outperformed major rivals Thursday as risks assets rose on a wave of ambivalent exuberance that is increasingly seeing bad news fall by the wayside as investors trade the path to a global economic recovery.

New Zealand's Dollar was riding the crest of a risk rally even after another record gain for U.S. payrolls helped the U.S. Dollar to stabilise following heavy losses in prior sessions. The steadying greenback was unable to hold the Kiwi currency down for more than a passing moment.

"Our reversion model flags some potential for commodity currencies like the NZD to pick up gains tactically against the USD in the near term. We expect the trade-weighted USD to decline by 2-3% in the coming quarter," says Bipan Rai, North American head of FX strategy at CIBC Capital Markets.

Investors celebrated the American job market recovery Thursday while continuing to bank on a vaccine being ready in time for it to be useful in combating the still-growing global pandemic.

This is after having cast aside the largest one-day increase in U.S. coronavirus infections and following reports that showed the total number of cases globally having risen more than 10% to 10.7 million in the last week. 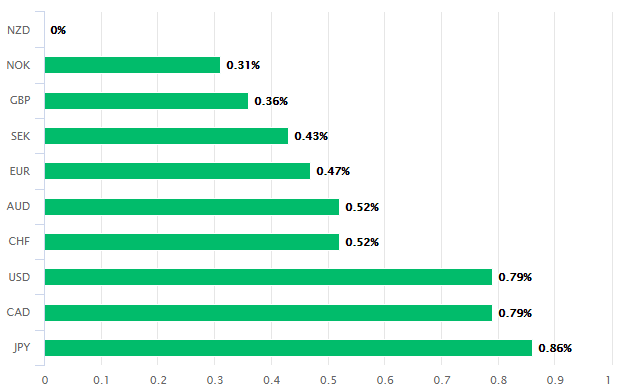 Meanwhile, U.S. lawmakers approved a bill requiring that Chinese officials involved in imposing the so-called national security law on Hong Kong be subjected to sanctions late Thursday with a majority sufficient enough to strip President Donald Trump of his capacity to veto it.

This was after Reuters reported on Wednesday that Senator Marco Rubio will introduce another bill in the coming weeks that seeks to bar 20 Chinese companies from operating in U.S. capital markets. That could ultimately see the jewels of China Inc forced off and out of U.S. stock markets.

The U.S.-China Economic and Security Review Commission also said that a "vast expansion" of U.S. companies operating in China since its accession to the World Trade Organization two decades ago endangers U.S. leadership in technology. In addition, the UK and Australia drew protest from China when joining the U.S. in offering refuge to any Hong Kongers fleeing the new law.

All told, the coronavirus is yet to be truly contained anywhere outside Europe, the antipodean countries and some parts of Asia while geopolitical tensions are mounting. All are enough to place question marks over the likely pace of the global economic recovery that began in May, though stock markets, the New Zealand Dollar and other risk assets have continued to climb.

"NZD/USD remains near recent highs and is trading just below 0.6500. AUD/NZD declined further and is trading towards 1.0660," says Kim Mundy, a strategist at Commonwealth Bank of Australia. "However, the risk of negative interest rates in New Zealand as well as Australia’s solid current account position can ultimately push AUD/NZD back towards 1.1000." 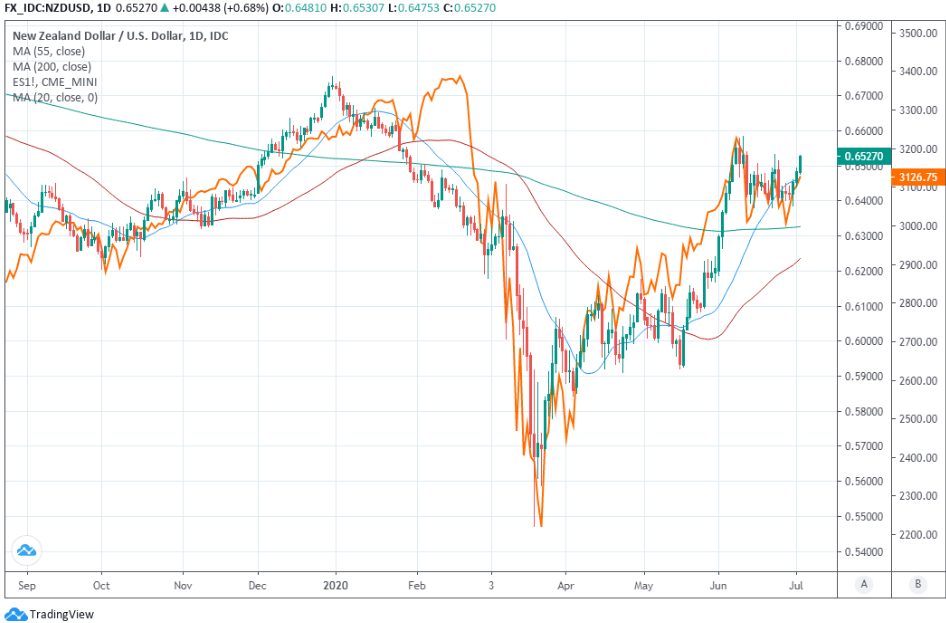 New Zealand's Dollar has risen sharply in the last month during which it was outperformed in the major currency sphere by only the safe-haven Japanese Yen and Swiss Franc, having tracked the S&P 500 higher.

"As we move into July, a number of the challenges that began in June will intensify," says Daniel Been, head of FX research at ANZ. "While all of this will introduce fresh volatility into the market, we do not think it will trigger a fresh bear market. Rather, we think that the ample liquidity still being deployed and the fact that many Fed programs remain almost unused will mean that any weakness should be treated as a buying opportunity."

Kiwi gains have built after New Zealand saw off much competition to become one of the first countries to fully contain the coronavirus and reopen its economy, which has bolstered the appeal of the currency at a point when it may already have looked attractive to investors.

The commodity and China-sensitive New Zealand Dollar might always be expected to do well at the beginning of a new and global business cycle, more so one in which China's resource hungry economy was the first to begin normalising after also having been the first to contract the coronavirus. 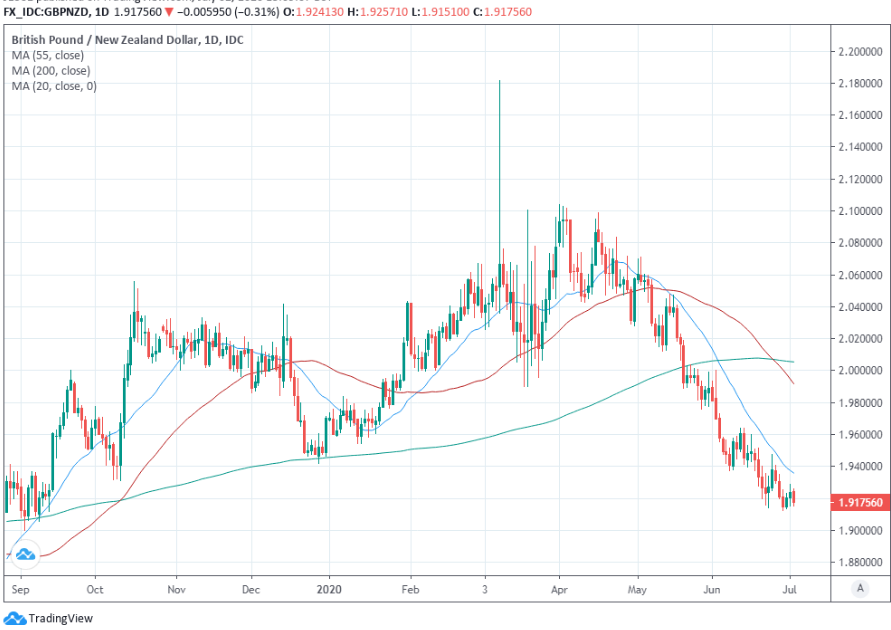 The Kiwi has been bolstered further by the relatively superior condition of the New Zealand government balance sheet that has been left in a far lesser state of disrepair than has been the case in other countries.

An earlier budget surplus and lower pre-existing levels of debt-to-GDP have enabled the Kiwi to avoid being shunned in the same way that Sterling has and have helped force the Pound-to-New Zealand Dollar rate lower since April.

"The NZDs outperformance alongside other risk currencies has been tempered by a dovish central bank focused on flattening the curve and easing financial conditions for the domestic recovery. We think this dovishness will linger," Been warns in a review of ANZ's forecasts. "GBP will be one of the few currencies to trade on its own fundamentals, with progress in the Brexit negotiations the key."

Gains for New Zealand's Dollar have been so swift and significant they've raised hackles at the Reserve Bank of New Zealand (RBNZ), which has grown concerned about the stifling impact a strong currency could have on the export trade as well as the bank's ability to deliver the inflation target it's mandated to. As a result, the bank has told the world it's contemplating a negative deposit rate as well as the printing of new money so it can dump Dollars on the market.

Been says there's a risk that such threats could push NZD/USD back to 0.60 but forecasts an exchange rate average of 0.65 through year-end and has told clients to treat any large declines in the Kiwi as a buying opportunity, which would be to say selling opportunity for those looking at the Pound-to-Kiwi rate. NZD/USD losses to 0.60 would lift GBP/NZD substantially from 1.91 on Thursday to 2.07 in the unlikely event that GBP/USD remained around 1.2475.

But ANZ forecasts relative stability in GBP/USD and NZD/USD that would see the Pound-to-Kiwi rate averaging 1.92 until the final quarter. 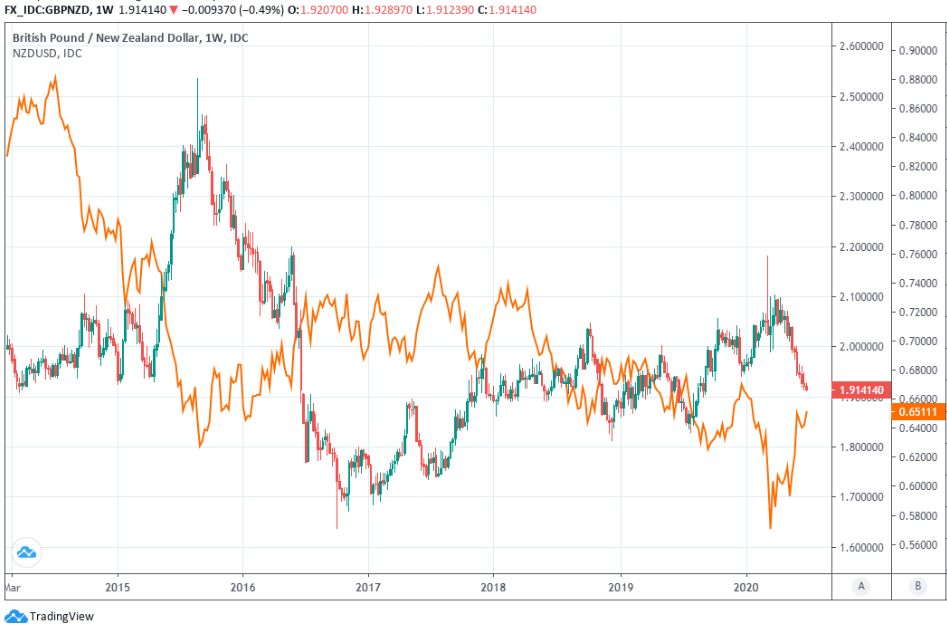