The New Zealand Dollar outperformed with gains over all major rivals Friday as Reserve Bank of New Zealand (RBNZ) policy threats proved unable to deter investors away from the Kiwi.

New Zealand's Dollar was the comeback currency of the week on Friday as gains over all major rivals led into the third spot in the performance rankings for the period even after the Kiwi was hit by steep losses on Wednesday when the Reserve Bank of New Zealand reiterated now familiar policy threats.

Outperformance comes after the RBNZ said the size of next week's government bond purchases under its emergency quantitative easing programme would be exactly the same as they were this week, around NZ$940 million, when investors and analysts had been wary of a currency-negative increase.

"Today is all about the RBNZ’s 2pm LSAP with the key question being will the RBNZ up the pace or shift the focus of bond purchase towards the long end? There are good reasons to think they might," say Daniel Been, head of FX research at ANZ in an earlier note to clients. "It’s a building story rather than an immediate threat to the NZD, but we don’t think the dovish Monetary Policy Review and the RBNZ’s reiteration that foreign asset purchases remain a policy option have been sufficiently priced in." 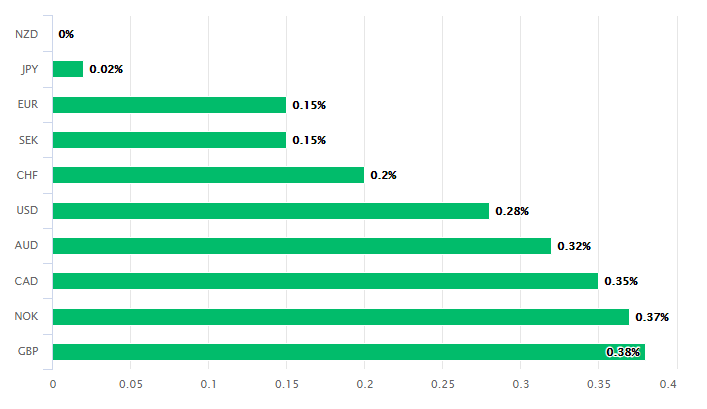 Much like others including the Federal Reserve and Bank of England, the RBNZ has reduced the size of bond purchases of late, citing improved 'market functioning.' It had bought NZ$1.075bn in the week to Friday 19.

But policymakers said Wednesday that preparations for a turn to negative interest rates and foreign asset purchases are continuing, while otherwise leaving monetary policy settings unchanged, in what was seen as another evolution of an ongoing attempt to put a lid on the New Zealand Dollar.

The Kiwi currency had risen by 17.6% against the U.S. Dollar on Friday, from its lows on March 19, while having gained a lesser 9% over Sterling since the Pound-to-New Zealand Dollar rate began to fall in early April and in the process has threatened to slow the antipodean country's economic recovery.

Rising exchange rates mean lower prices for consumers and lesser inflation, at a time when the central bank is fighting against the deflationary force that is global recession brought on by efforts to contain the coronavirus, although it also reduces export competitiveness.

Kiwi Dollars have been in demand after the country squared the coronavirus away before most others, enabling the economy to reopen earlier than others and as investors continued to bet that a global recovery will come quick and be enough to reverse 2020's global economic losses. 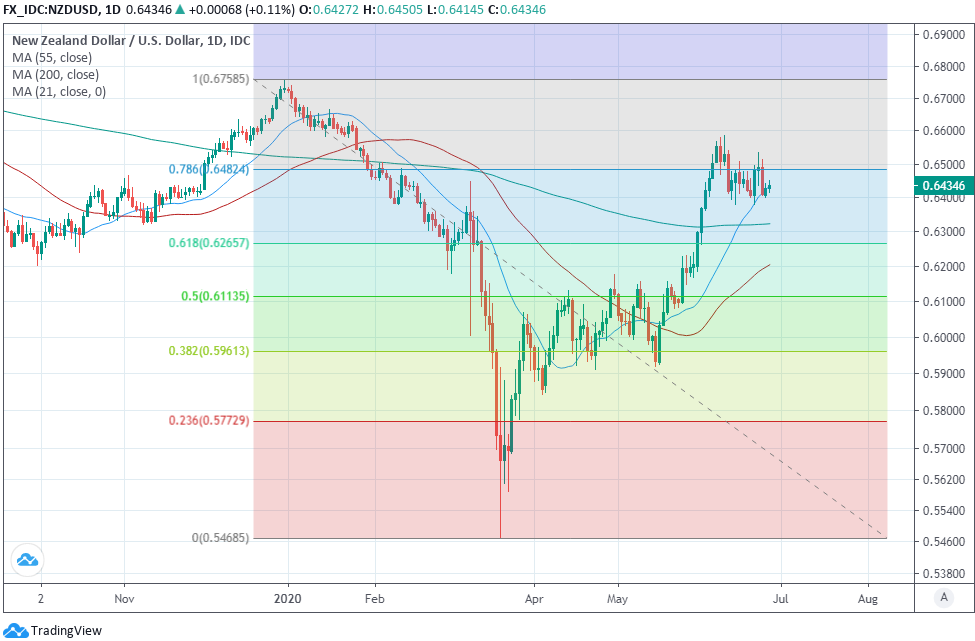 Above: NZD/USD rate at daily intervals with Fibonacci retracements of 2020 downtrend.

"There is a tactical argument for waiting till after the new 2041 bond is launched in mid-July, but leaving the market to itself for that long runs the risk of an undue tightening of financial conditions, make the new bond more expensive, and help keep the NZD elevated, none of which is helpful for our country. The weekly pace of purchases is up to RBNZ staff, and not the MPC, but we doubt the MPC will be happy with the recent tightening," Been says.

New Zealand's national balance sheet was already in much better condition than those of other developed world countries even before the virus came along but its relative strength could be bolstered further by the country's short-lived plight at the hands of the pneumonia-inducing disease.

That's an argument for a stronger New Zealand Dollar if there is such a thing, and one that's bolstered the entire time that investors are happy to bet against the coronavirus, given the Kiwi is a commodity currency that would typically perform well in a global economic recovery or upturn.

But Kiwi strength is a problem for the RBNZ and one that risks intervention every day that it goes on given the bank has told the world it's contemplating printing new money so it can dump Dollars on the market. 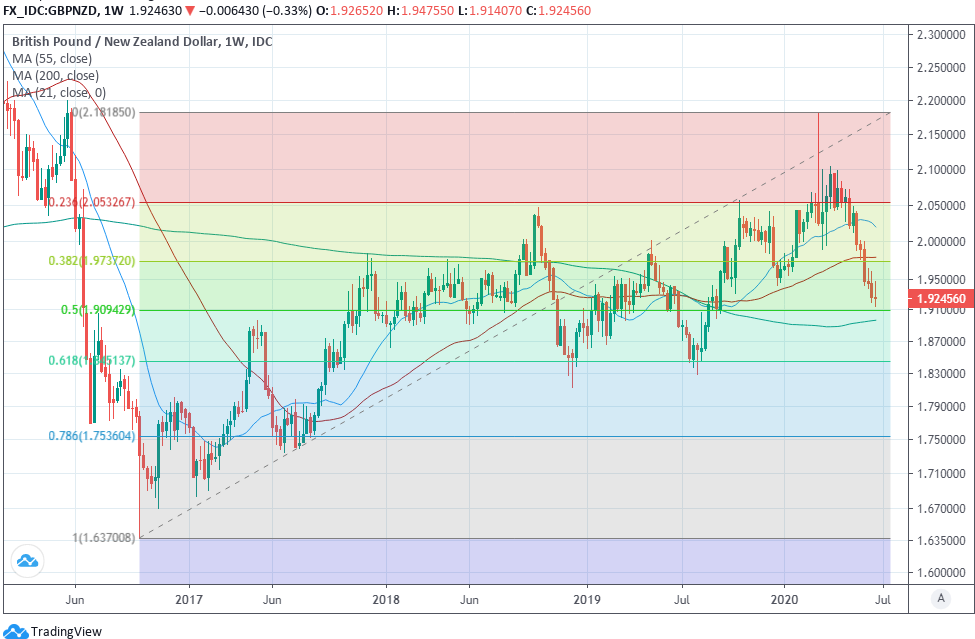 Intervention is a longer-term risk, while ANZ and others see the RBNZ attempting to cap the currency in July by increasing the amount of bonds it buys and especially longer-term bonds, which would reduce the returns offered to the investors whose bids have been pushing up New Zealand's exchange rates.

But if others are right to be growing cautious on the outlook for stock markets and the currencies that shadow them, the RBNZ might receive a helping hand from the same investors next month.

And if this latter group is right then NZD/USD could be due a more longer-lived correction while the Pound-to-New Zealand Dollar rate might experience relief from the selling that's driven it lower since April.

"Some payback may be due for stocks and currencies in July. We would avoid currencies – IDR, AUD and NZD – that appreciated most in June and Q2. In Europe, EUR will have more scope to correct lower than GBP," says Philip Wee, a strategist at DBS Group. "Sensitivity to trade tensions was evident from the Navarro blunder over the Phase 1 trade deal earlier this week. Pension funds are also expected to rebalance their portfolios in the coming weeks by lightening their equity holdings after the strong rally in 2Q."