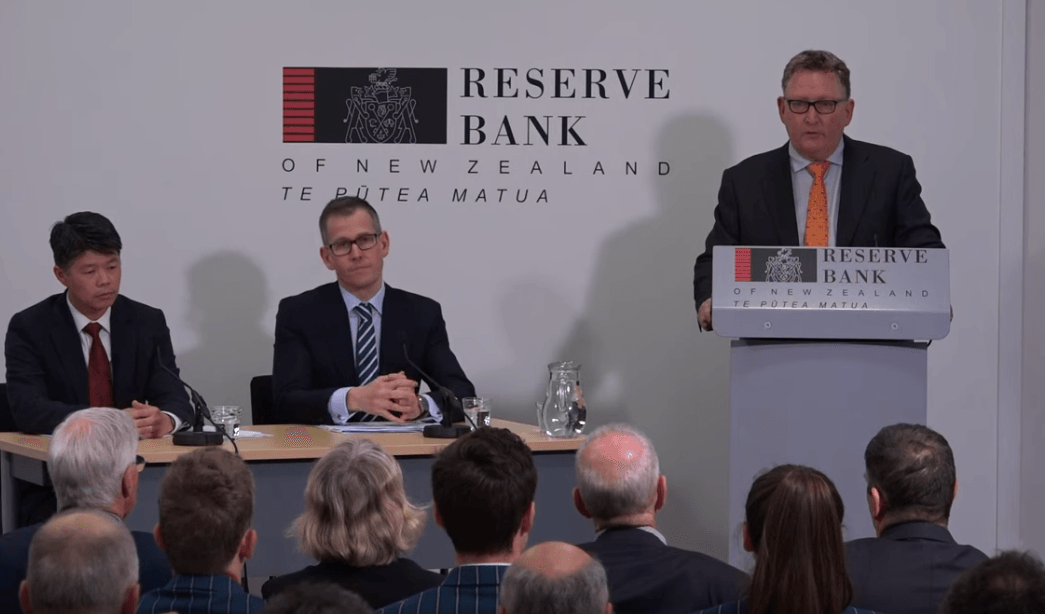 Sterling notched up losses against most rivals and the Pound-to-New Zealand Dollar rate hit the bottom of its recent 1.91-to-1.97 range, but it could be volatile mid-week if the RBNZ succeeds in wobbling the Kiwi.

Markets are looking for the RBNZ cash rate to be left unchanged at 0.25% but there's uncertainty over the quantitative easing (QE) programme as well as what it might say on the subject of negative interest rates. It's the latter details that investors and analysts will be most interested to hear at 03:00 Wednesday.

The RBNZ increased the size of its QE programme from $33 bn to $60 billion in May and said "a negative Official Cash Rate (OCR) will become an option in future." The remark was widely perceived as an attempt to put a lid on the New Zealand Dollar, which had risen by 10% in the three months leading up to that meeting.

But the bank has since slowed the pace at which it buys government bonds under its quantitative easing programme, indicating a lesser degree of concern about the immediate outlook for the economy.

"Both the Fed and the BoE have put a lid on the NIRP story in USD and GBP, but if the RBNZ moves closer to finally implementing negative interest rates, it may be that the NIRP betters returns with a vengeance. The NZD is now almost 5% stronger than when the latest RBNZ projection was launched. The positive aspects of the NIRPening are debatable, but it works if you want to kill your currency. How strong an NZD can the RBNZ accept?" says Andreas Steno Larsen, a strategist at Nordea Markets. 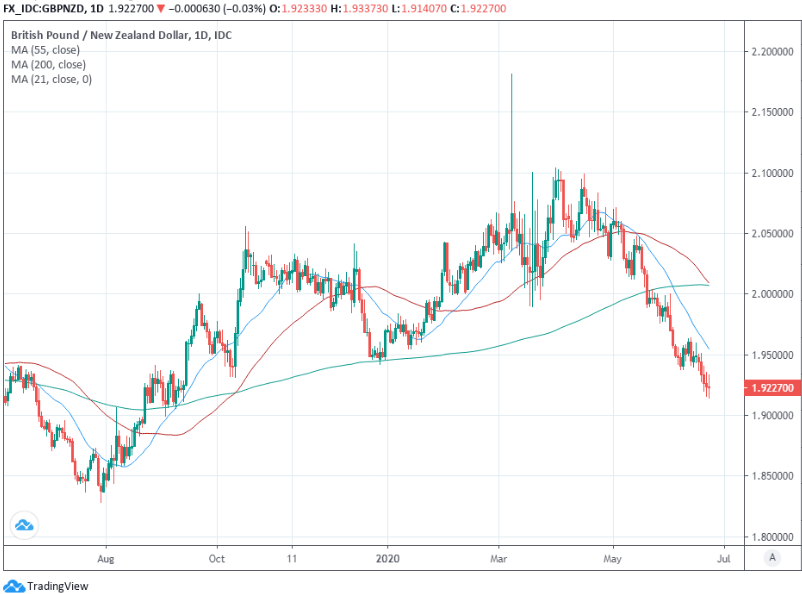 The Kiwi was crushed by the RBNZ's May 13 stance on negative rates but weakness didn't last for long as it's since risen by 8.2% against the U.S. Dollar and nearly 7% against Sterling, which is a problem for the RBNZ because a rising currency makes exports less competitive and reduces inflation.

"We watch for guidance after the aggressively dovish mid-May meeting that seemed to have the RBNZ laying the groundwork for negative rates. A more wait-and-see message might be on the table, given the scale of the rebound in confidence and the country’s successful approach on the coronavirus," says John Hardy, head of FX strategy at Saxo Bank.

The rub for the bank though is that New Zealand's Dollar has become one of the best out of a bad bunch among major currencies since the coronavirus came along, given NZ was among the first to contain the pneumonia-inducing disease.

New Zealand's economy also suffered comparatively little if first-quarter GDP figures for major economies are anything to go by, and the public purse was in better order than many others to begin with. Kiwi GDP growth fell -1.9% in the opening quarter and was bettered only by Norway and Sweden.

Coronavirus risks breaking the bank for many countries but not so for New Zealand, which is also a commodity exporter whose currency would always have benefited from the birth of the new business cycle that began with the recovery from the virus-induced recession. 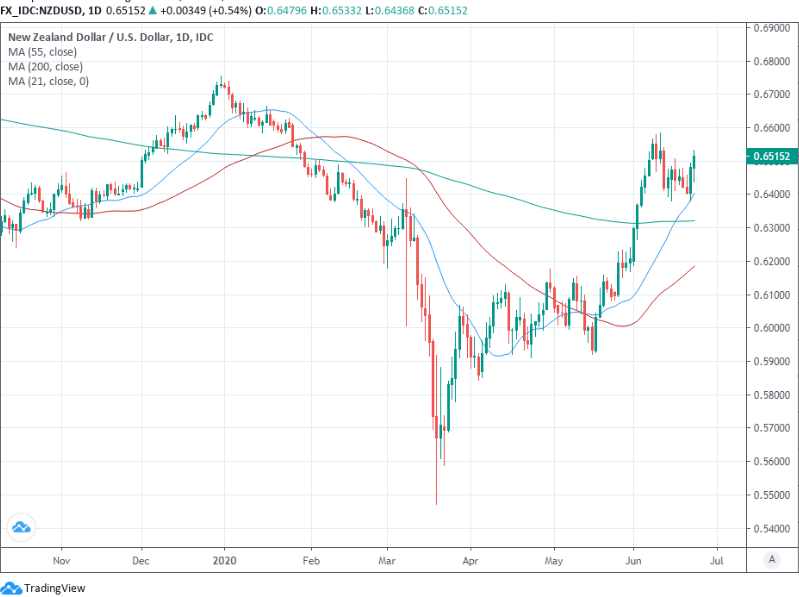 Above: NZD/USD rate shown at daily intervals with selected moving-averages.

"Accordingly, if indeed the RBNZ adjusts its rethoric with the aim of putting a lid on the NZD, we see the balance of risks for the currency as tilted to the downside in the aftermath of the meeting this week. Stepping away from the short-term impact, there is a significant risk that the threat of negative rates may not be enough to keep NZD appreciation contained. As we do not expect any more rate cut to be ultimately delivered, we cannot exclude the possibility that the RBNZ will attempt to step in against the NZD with other - and possibly more direct - measures," says Francesco Pesole, a strategist at ING.

The RBNZ would lift the Pound-to-New Zealand Dollar rate sharply if it succeeds in wobbling NZD/USD, which was trading comfortably above 0.65 on Tuesday, while GBP/USD is on its front foot as it has been this week.

A fall that takes NZD/USD back to 0.64 would merely wipe out Monday and Tuesday's gains for the Kiwi but would also lift GBP/NZD to 1.9531, assuming GBP/USD held around Tuesday's 1.25.

The Pound-to-Kiwi rate would rise even further to 1.9687 if the GBP/USD rate continued on Tuesday's upward path to reach 1.26 as NZD/USD turned lower. However, if the RBNZ neglects to put a lid on the Kiwi then the Pound-to-New Zealand Dollar rate could find itself growing vulnerable again.

"While part of such dovish rethoric has already been priced into the NZD, the relatively high levels at which NZD is trading (considering the depressed state of the global economy) probably suggest that markets are still not entirely seeing negative rates as a tangible possibility," says ING's Pesole, who forecasts a 0.63-to-0.64 range for NZD/USD this week and 0.64 in one-month's time.