Technical analysts at JP Morgan have said the New Zealand Dollar might be entering a long-term uptrend agains the U.S. Dollar, a development that could flip a whole host of other New Zealand Dollar exchange rates into similar uptrends.

"The extent and impulsive structures of the rally off the 0.5469 March low are in strong favour of a new, long-term up-trend," says Thomas Anthonj, Senior Technical Strategist at JP Morgan in London.

However, the analysis does warn of the potential for a near-term setback to any rally, that could result in the exchange rate falling back to technical supports between 0.6331/02 and 0.6204 next.

"We remain on alert for first signs of trend exhaustion," says Anthonj.

The suggestion that some short-term setback to the New Zealand Dollar's advance could materialise comes as the currency underperforms all its major rivals, even on a day that stock markets and equity prices are rallying.

The New Zealand Dollar is in fact the worst performing major currency on Tuesday, June 16 despite European equity markets rallying by over 2.0%. Typically the NZ Dollar would be expected to outperform its peers when markets are in a bullish mode, which makes the fundamental dynamics behind the setback puzzling.

It is however the job of the technical analyst to look through the noise that can often be associated with fundamentals, which can leave commentators chasing their tail in order to find explanations for the inevitable ups and downs a market experiences. 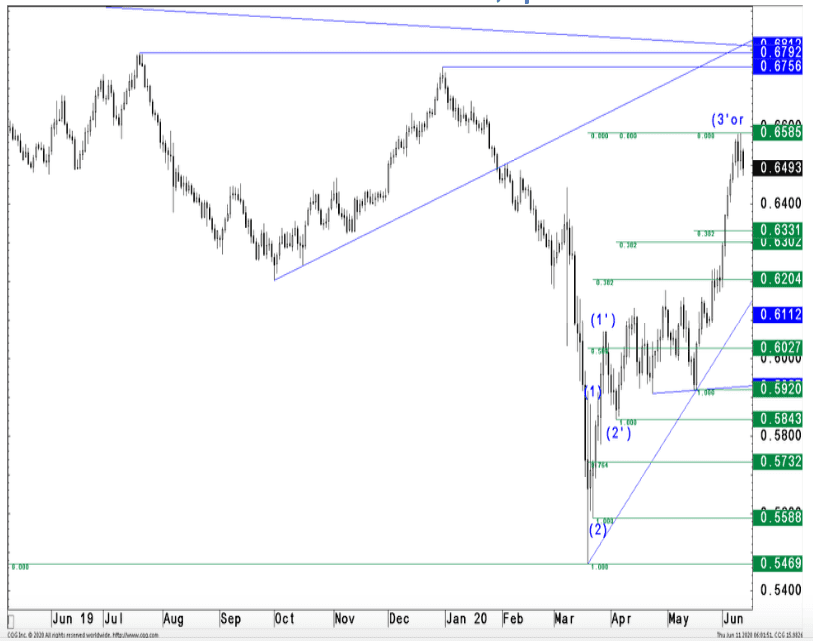 With this in mind, Anthonj says the Kiwi Dollar's uptrend will likely establish itself once more and is expected to challenge the next major resistance zone at 0.6756/92 which marks the December and July 2019 tops.

This would be where the uptrend would be expected to stall.