The currency has been rallying alongside rising global equity markets and commodity prices, confirming its positive correlation with broader investor sentiment, and as a result of this trend it is the second-best performing major currency of the past week .

However, analysis from Australian and New Zealand lender ANZ Bank suggests the prospect for runaway gains is slim, as it is still premature to assume the global economy has fully broken the gravitational pull of the covid-19 pandemic, while Reserve Bank of New Zealand (RBNZ) policy settings remain unsupportive.

"The NZD is insulated from too much strength, but increasingly vulnerable to substantial weakness, with the RBNZ among the most dovish central banks," says Daniel Been, Head of FX and G3 Research at ANZ, in a monthly currency forecast note to clients.

Analysts say the New Zealand Dollar's recent advance is also a result of the country's exit from lockdown conditions, with Prime Minister Jacinda Ardern in May saying the covid-19 virus had been virtually eliminated from the country.

This has allowed New Zealand to lead many of its developed market peers out of lockdown conditions, which should in turn result in some relative outperformance of the economy - and by extension the NZ Dollar - over coming weeks and months. 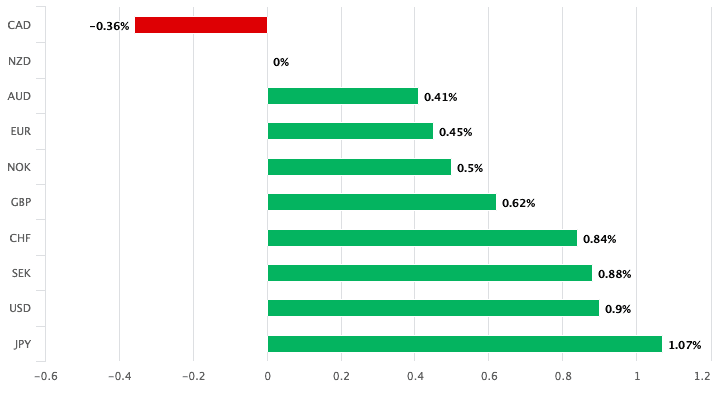 Above: The New Zealand Dollar has outperformed the majority of its peers over the past 24 hours

However, New Zealand remains a small and open economy and although it might be leading the exit from lockdown, there is only so much recovery potential while the rest of the global economy struggles to find its feet.

According to ANZ, the New Zealand and Australian Dollars both carry the weight of global growth expectations.

"By virtue of its economy, New Zealand was highly exposed to the pandemic’s fallout. It experienced a total drop in tourism, which will weigh on domestic incomes, spending and house prices. Even as regional tourism resumes, and with government support, a weak global demand backdrop is likely to slow the domestic recovery," says Been.

"Domestic monetary policy decisions have created a nuanced backdrop for currency performance," says Been. "The RBNZ’s dovish guidance – a willingness to consider negative rates and a preference for quantitative easing across the curve – has created a setting for domestic rates outperformance. This policy divergence is likely to dampen the NZD ’s performance, particularly against more cyclical currencies that are policy constrained either by choice or by proximity to an effective lower bound."

RBNZ policy makers have been apparently happy to introduce the idea of negative interest rates to the market, suggesting that such a move could add further support to the economy by ensuring the cost of borrowing remains as low as possible.

Another potentially beneficial result of negative interest rates - or at least the communication that they are possible - is that it keeps the value of the New Zealand Dollar capped.

The RBNZ, like the Reserve Bank of Australia, have traditionally viewed currency strength as being headwinds to economic growth and dynamics as it tends to stifle demand for exports.

ANZ say the RBNZ is striking an apparently more aggressive tone on monetary policy than the RBA, and this should benefit the AUD/NZD as a result.

However, for the majority of New Zealand Dollar exchange rates, it will be the global picture that remains key.

"We are cautious on the global recovery and see rising risks from geopolitical tension as a potential downside catalyst to the market view. This is reflected in our NZD/USD forecast path to 0.55 by year-end," says Been.