The New Zealand Dollar stormed higher on Wednesday, Feb. 13 in the wake of the Reserve Bank of New Zealand's (RBNZ) relatively upbeat monetary policy meeting, however the strength was not able to trigger a break below the 2.0 level in the Pound-to-New Zealand Dollar exchange rate.

The exchange rate fell sharply as the NZD rose after the RBNZ left the cash rate unchanged at 1% and signalled that it no longer expects to have to cut rates again in the near future, whereas it had suggested in November that at least one more cut was likely this year. 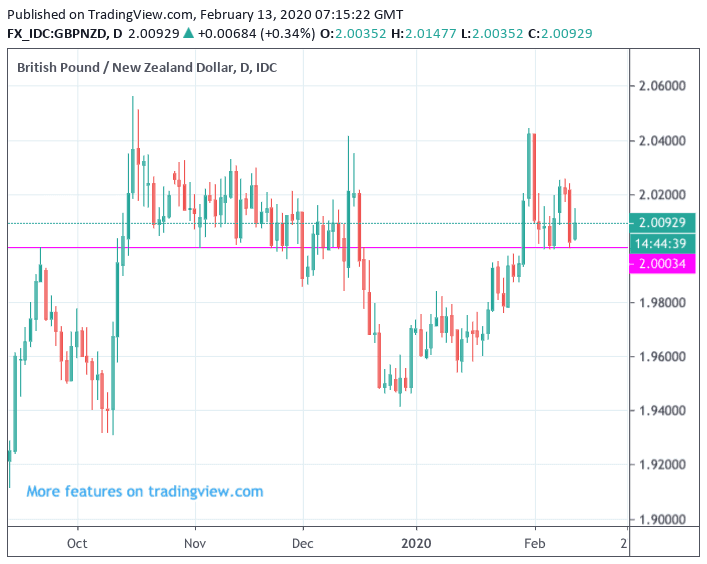 Above: The GBP/NZD daily chart with the 2.00 area highlighted.

There appears to be relatively decent support for Sterling in the 2.00 vicinity which in turn suggests the risk-reward in betting on a sustained move below here does not look to be favourable for traders. This leads us to expect the pair to remain above here for the time being.

The OCR is the Official Cash Rate set by the RBNZ, it is essentially New Zealand's basic interest rate, the level of which impacts on all other lending rates set in the financial system. The RBNZ moves the cash rate higher or lower depending on how it expects the economy to perform in the future, lowering it if it sees downside risks and raising it if the outlook is seen improving.

On Wednesday the RBNZ released a new forecast for the OCR that implied a 25bps interest rate hike would be enacted by the end of 2021, in line with a generally more upbeat assessment of the outlook. Many in the market had been expecting the next move to be a cut, therefore shifting expectations for the next move to be a hike is having an upward pull on NZD valuations.

The RBNZ is apparently more upbeat as recent economic data has come in better than expected with December unemployment unexpectedly falling to 4%, fourth quarter 2019 CPI inflation reading at healthy 1.9% while house price inflation picked up into the end of last year.

"Putting aside any risks stemming from the coronavirus, there would indeed appear to be reason for optimism in New Zealand," says Jane Foley, Senior FX Strategist at Rabobank. "For now the RBNZ policy look set to remain on hold."

The big question mark hanging over the New Zealand economy is the coronavirus outbreak in China, which is likely to have a notable impact on economic activity in New Zealand's largest export market.

The impact of the disease on the economy is yet to be felt, but for now the RBNZ expects any negative impacts on New Zealand to be short-lived. We would expect the NZD's upside potential to ultimately be capped until such a time as it becomes apparent the tide has been turned against the outbreak and the Chinese economy is starting to build up a head of steam.

"In the near-term, the virus remains the key story for NZD: the longer the outbreak keeps the Chinese economy in lockdown mode, the more concerns around the negative implications for highly-exposed economies such as New Zealand will mount, thereby putting a lid on any decisive NZD rally," says says Francesco Pesole, FX Strategist at ING Bank.

However, Pesole says the outlook for the New Zealand Dollar has been improved by the RBNZ's assessment and should coronavirus fears dissipate the NZD can find some upside momentum.

"A surprising hawkish tilt by the central bank doesn’t just give a short-term respite to the battered New Zealand Dollar, but also paves the way for a sustained recovery once virus-related fears dissipate," says Pesole.