The Pound-to-New Zealand Dollar exchange rate continues to edge lower in a well-defined range that is likely to remain entrenched for some time to come, providing some stability and certainty to those watching this market for the purpose of international payments.

A look at the charts tells of an exchange rate that is currently undergoing a period of consolidation; albeit with the New Zealand Dollar being favoured over a Pound Sterling which is currently being pressured by rising expectations for a month-end interest rate cut at the Bank of England.

With this in mind, the Friday release of flash PMI data will likely provide the highlight of the week for the GBP/NZD exchange rate, a surprising outcome could well provide some volatility.

A look at the charts suggest GBP/NZD will remain anchored to the range defined by 1.9834 to the top and 1.94 to the bottom. A look at the charts suggests 1.94 to be a solid technical level that has been in play at various points over recent months, and it has shown itself to arrest moves in either direction. Therefore, at this juncture we would expect it to provide meaningful support against any periods of major weakness in Sterling. . 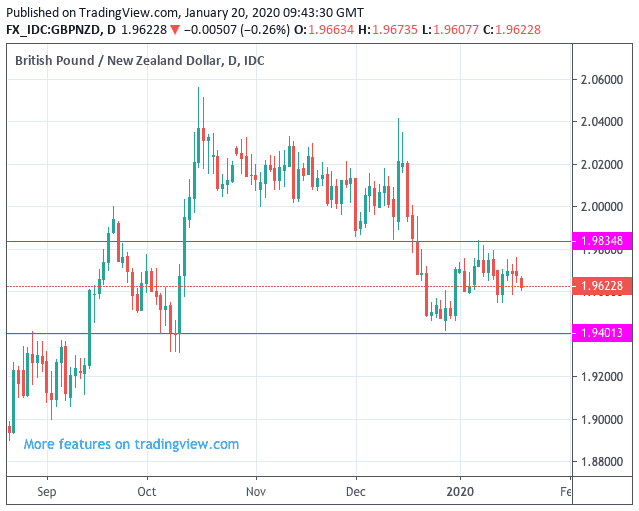 The New Zealand Dollar is also displaying rangebound tendencies against the U.S. Dollar, and should this remain the case we would remain confidence that the range in GBP/NZD sticks. "

"NZD/USD is unlikely to break out of its recent 0.6550–0.6700 trading range this week. Reduced expectations for both FOMC and RBNZ interest rate cuts are likely to have an offsetting influence on NZD/USD," says Joseph Capurso, a strategist with Commonwealth Bank of Australia.

The highlight of this week comes on Thursday when analysts will be watching the release of New Zealand inflation for the final quarter of 2019, and should data beat expectations the NZD could "lift back towards the top of its recent trading range," says Capurso.

The market consensus is for a 0.4%/qtr gain in inflation which would lift annual inflation to 1.8%/yr.

"In our view, there are growing risks that the RBNZ cash rate will not be cut in 2020 amid tentative signs the New Zealand economy has turned a corner. This is NZD positive," says Capurso.

Daniel Been, Head of G3 & FX Research at ANZ says he expects headline CPI to have risen 0.5% q/q in the December quarter, with annual inflation accelerating to 1.9%.

"This would be stronger than the RBNZ’s November MPS forecast, and would afford policymakers scope to sit back and see how things evolve, a positive signal for the NZD," says Been.

Sterling weakness at the start of the new week comes as markets digest latest developments concerning EU-UK trade negotiations and await a key set of economic data due out at the end of the week that should dictate as whether the Bank of England cuts interest rates or not on January 30.

Weekend comments from Chancellor of the Exchequer Sajid Javid suggest the UK will not seek alignment on EU rules as a basis for future trade relationships, instead the country would seek the required regulatory divergence that allows it to strike up fresh and unique trade deals with other countries.

"GBP is underperforming in markets that are otherwise moderately risk-on overnight. In a weekend interview, Chancellor Javid warned business that that UK regulation would diverge from the EU after Brexit," says Adam Cole, foreign exchange strategist with RBC Capital Markets. "The comments, which would imply limited access to European markets seem to diverge from the 'common high standards' implied by the political declaration on the future relationship."

The EU wants the UK to stay in line with its regulations in return for a zero tariffs, zero quotas trade deal but Prime Minister Boris Johnson has repeatedly vowed to break free from the EU's rules.

Two weeks ago President of the European Commission Ursula von der Leyen said in a visit to London that while she wanted the EU and UK to be as closely aligned as possible, the more divergence the UK wanted, the less accommodative the future trading relationship will be.

The comments from Javid at to the sense that the upcoming trade negotiations between the two sides will be fraught with difficulty, with the UK wanting to diverge but avoid the costs of doing so. For their part, the EU will likely strike an uncompromising tone on divergence.

This will increase market fears that the UK and EU will be unable to secure a new trade deal before the year-end deadline, which will create an atmosphere of anxiety within which the British Pound will likely struggle.

Sterling this Week: Data to Watch

The Pound was the worst performing major currency last week although it still faces a plethora of risks that have scope to cause volatility in the coming days.

Tuesday marks the release of unemployment and wage growth figures for December, which have been elevated in importance by the dire messages coming from other data released in the last fortnight.

Consensus is looking for the unemployment rate to hold steady at a multi-decade low of 3.8% for December and for wages to have grown by an annualised 3.1%, down from 3.2% in November.

The data is out at 09:30 Tuesday while IHS Markit PMI surveys are due at the same time Friday. Markets are looking for the domestically as well as globally troubled manufacturing sector to have retrenched at a lesser pace this month.

“A stream of disappointing UK data has confirmed the MPC's concerns and sharply increased the odds of a January rate cut. Both November UK labour data and January PMIs will be crucial factors to watch next week. A downside surprise or signs that the data is not improving would likely cement market expectations of a cut,” says Chris Turner, head of FX strategy at ING.

Inflation and retail sales data out last week have prompted the market to go further in pricing-in a January 30 rate cut from the Bank of England and in the process, undermined appetite for the Pound. Retail sales revealed the economy hasn't seen any boost from the Black Friday promotions, which it typically does, adding to mounting evidence of a final quarter contraction.