- GBP/NZD has been going lower since Oct.

The Pound-to-New Zealand Dollar exchange rate continues to hold above the 2.0 level, but a steady downtrend in the value of Sterling against its New Zealand counterpart since mid-October suggests a break below here beckons.

The GBP/NZD exchange rate peaked at 2.05593 on October 16, a level which has since proven to be a high-water market for the pair which has steadily progressed lower since.

Indeed, the trend since October has been lower as a result, but support at the psychologically significant level of 2.0 appears to be a decent barrier to further NZ Dollar strength and has been acting as a buoyancy aid for GBP/NZD.

We therefore continue to watch this level believing to be the key technical pivot for the outlook, and would expect that a break below here would open the door to a renewal of the exchange rate's decline.

Yet, confidence in such an outcome remains low in an environment of broad-based Sterling strength. The UK currency is after all on the offensive against the majority of the world's currencies as markets price in a Conservative majority in Thursday's election.

This strength in Sterling has been in place since late July, and can be seen in the broader GBP/NZD charts. If Sterling reacts positively to the election result we could see the Pound break higher against the New Zealand Dollar once more in sympathy with the multi-week trend of strength.

However, there is a distinct possibility that GBP/NZD does in fact go lower as foreign exchange markets engage in 'buy the rumour, sell the fact' behaviour on the election result. In short, a Conservative majority looks to increasingly be in the price of the Pound, and the actual confirmation therefore potentially offers little new information.

As such, Sterling could in fact decline in the wake of the election outcome, thereby reinforcing the GBP/NZD exchange rate's recent trend lower.

"We like to 'fade the optimism around a strong Conservative election result. Buy the rumour, sell the fact," says Martin Lund, an analyst with Nordea Markets. 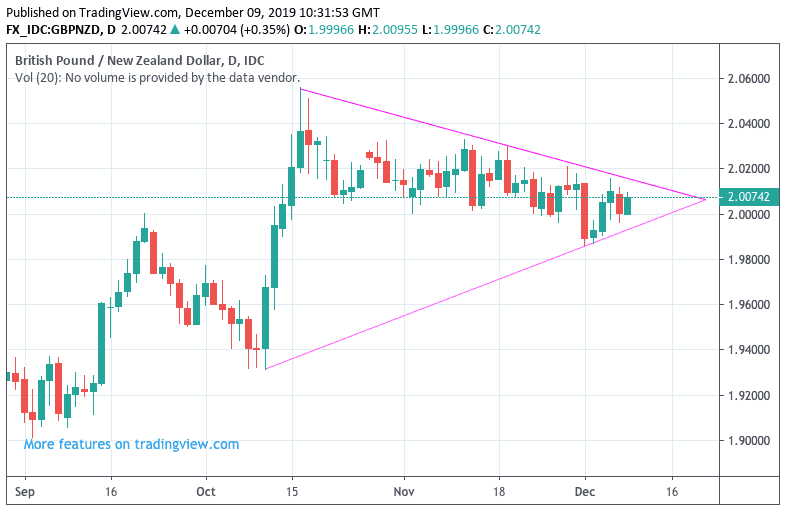 Above: Competing trends in GBP/NZD: The short-term downtrend meets the longer-term recovery.

The New Zealand Dollar's recovery against the Pound since October coincides with a notable improvement in sentiment regarding the economy's outlook.

The Government is this week being tipped to commit to further investment spending, which should further boost activity in the economy. On Tuesday, the Government releases its Half‑Year Economic and Fiscal Update (HYEFU) and the country's strong financial position should allow for an increase in spending.

Finance Minister Grant Robertson last week said he was planning to bring forward major investments in infrastructure and details of the package are expected to be announced in the HYEFU.

Meanwhile, last week the Reserve Bank of New Zealand (RBNZ) announced its latest bank capital decisions, and the changes announced were softer than those initially proposed, "meaning they are likely to be less of a headwind to the economy than previously thought," says Sharon Zollner, Chief Economist with ANZ.

The economy has also seen a lift in business sentiment, a pick-up in the housing market, and commodity prices remain supported on the global level, thanks in part to fading anxieties surrounding the U.S.-China trade war.

"Reflecting these more positive developments, we have changed our OCR call to only one 25bps cut in May, removing our August placeholder cut for the bank capital changes," says Zollner. "However, while things are looking a little sunnier at the margin, we still think the RBNZ will conclude that a bit more monetary stimulus will be required eventually. The economy still faces a number of headwinds and clouds are expected to form on the horizon in time."

Therefore, economic data will continue to be closely watched: any deterioration in the economy could see expectations for future rate cuts increase once more. 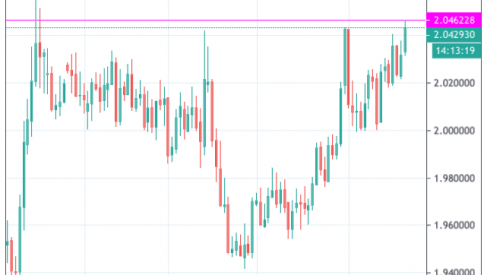